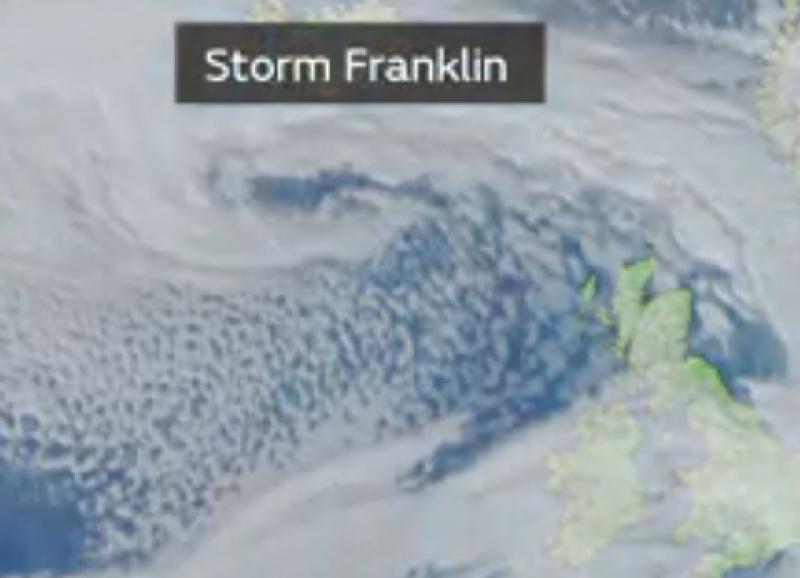 Ireland is being battered by the third storm in a week with Status Yellow and Orange warnings declared by Met Éireann ahead of another week of wintry weather.

Hot on the heals of Storms Dudley and the more damaging Eunice, Storm Franklin was officially named on Sunday morning by forecasters in Britain on February 5. It's described as a low-pressure system that will bring high winds during Sunday and into Monday.

Every county in on the island of Ireland is under some form of weather warning. Met Éireann outlined what to expect in its lunchtime forecast on Sunday.

WATCH LIVE: Track the path of Storm Franklin as it crosses Ireland with dangerous conditions forecast

"Storm Franklin will bring very windy and wet weather today with strong to gale force westerly winds and severe gusts, especially along western and northern coasts, with very high seas leading to some coastal flooding. Heavy rain will continue to move southeastwards and will be followed by scattered showers, some heavy with isolated thunderstorms and hail, and sleet possible later. After a mild start, it will turn much colder from the northwest after the rain clears with highest afternoon temperatures of 4 to 8 degrees.

"Storm Franklin will cause very windy conditions on Sunday night with strong to gale force west to northwest winds and severe gusts. There will also be very high seas leading to coastal flooding. Showers will continue, most frequent over the northern half of the country but easing elsewhere towards morning. Some showers will be heavy with hail, and some will fall as sleet or snow too, especially on high ground. Lowest temperatures of 1 to 4 degrees, turning less cold by morning.

The forecaster expects the weather's impact to continue to be felt on Monday but decrease during the day.

"Windy to start tomorrow with strong to near gale force and gusty northwest winds. However, winds will ease and back southwesterly through the afternoon. A good deal of dry weather overall with sunny spells, though isolated showers will affect the northern half of the country. It will turn cloudier from the west in the afternoon with patchy light rain and drizzle developing in Atlantic coastal counties in the evening. Highest temperatures of 9 to 11 degrees," it said.

The Met Office in the UK is Met Éireann's storm forecasting partner. It has published charts which show the track of Storm Franklkin. MORE BELOW TWEETS.

The Met Office has named #StormFranklin

⚠️A Yellow wind warning is in place for the rest of Ireland for today from 9:00 until Monday at 9:00.#StormFranklin will cause very strong winds with severe & damaging gusts

A host of weather Storm Franklin Status Orange and Yellow warnings have been issued by Met Éireann through Sunday, Monday and Tuesday. For full details read here.

Monday night: A mostly cloudy night with patchy rain and drizzle spreading from the west. A band of heavier and more persistent rain will spread from the Atlantic towards morning. Turning windy again overnight as southwest winds increase fresh to strong. A generally mild night with lowest temperatures of 4 to 8 degrees occurring in the morning.

Tuesday: A wet start to Tuesday but rain will quickly clear eastwards, followed by sunny spells and scattered showers, with the chance of sleet on high ground in the northwest. Breezy with moderate to fresh and gusty westerly winds. Highest temperatures of 6 to 10 degrees.

Becoming dry with clear spells for most on Tuesday night, though showers will continue in Atlantic coastal counties. Lowest temperatures of 2 to 6 degrees in moderate southwest winds.

Wednesday: Turning cloudy again on Wednesday with scattered showers to start. More persistent rain will spread from the Atlantic through the afternoon and evening. Another blustery day with fresh to strong and gusty southwest winds. Highest temperatures of 8 to 11 degrees.

It will turn much colder early on Wednesday night as rain clears to the east. Showers will follow behind, falling as sleet in places with the chance of snow on higher ground. Lowest temperatures of -2 to +1 degrees, with frost and icy stretches developing.

Thursday: A chilly day with sunny spells and scattered showers, some falling as hail and sleet. Highest temperatures of 4 to 7 degrees in fresh and gusty westerly winds.