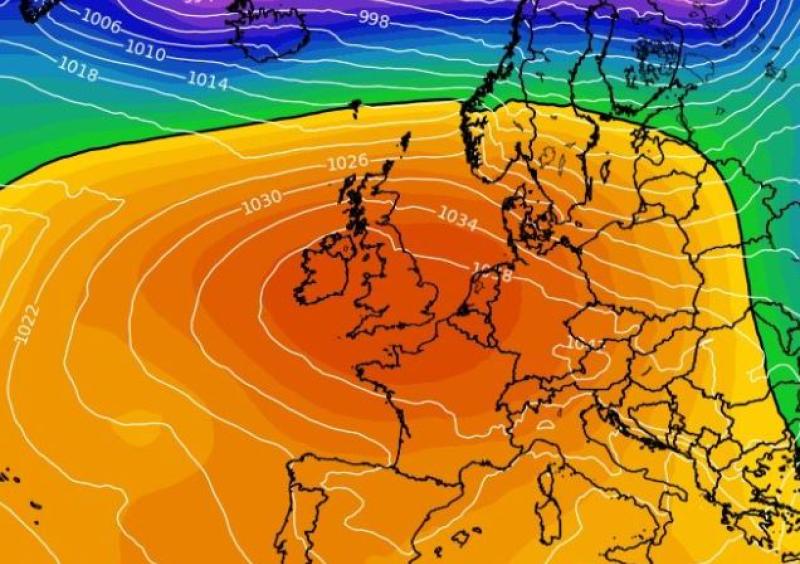 High pressure over Ireland will continue to dominate the weather in the coming days according to the latest weather forecast for Ireland from Met Eireann.

The latest forecast from Met Eireann says it will continue settled and largely dry through the rest of the week as high pressure dominates the weather. Frost and fog is expected to form by night, with fog persistent in places during the day time hours.

The latest weather forecast for Ireland for Wednesday from Met Eireann is for a dry day with good spells of sunshine. Becoming a little cloudier later in parts of the north and west with the odd spot of drizzle possibly developing. Highest temperatures of 6 to 10 degrees in light to moderate southwesterly or variable breezes.

Wednesday night will be a dry night with good clear spells. Lowest temperatures here of -2 to + 3 degrees with frost forming especially over Munster and Leinster where skies will be clearest. Milder to the northwest where cloudier conditions will persist bringing the chance of some patchy drizzle. Light breezes will allow fog to form, becoming widespread and dense in parts, especially over the southeast of the country.

The latest weather forecast for Ireland for Thursday from Met Eireann says that fog and low cloud will persist in the south and southeast through much of the day with a few brighter spells developing elsewhere. Remaining mostly dry elsewhere but there will be a few patches of drizzle possible near Atlantic coasts. Highest temperatures of 6 to 10 degrees in mainly light southerly or variable breezes.

Fog will become widespread on Thursday night and will be dense in places over the east of the country in light variable winds. Cloudy over the western half of the country with a few spots of light rain and drizzle there. Lowest temperatures will range from -1 to +4 degrees, holding a little milder in the southwest.

Fog will once again be slow to clear through Friday morning and will linger for much of the day over the eastern half of the country. Elsewhere it will be a largely dry day with a mix of cloud, sunny spells and a few patches of drizzle along western coasts. Highest temperatures of 4 to 8 degrees, coolest where fog persists, in light variable breezes. On Friday night it will continuing generally dry and cloudy with fog becoming dense again and migration northwards to affect mostly Leinster and Ulster. Lowest temperatures of 0 to 4 degrees, with patchy frost developing in the east.

According to the latest Met Eireann forecast, fog will clear through the early morning on Saturday to leave a mix of unny spells cloud and some patchy light rain or drizzle at times. Highest temperatures of 4 to 8 degrees in light breezes. Similar conditions prevailing overnight but towards morning drier conditions and more prolonged clear spells will develop. Lowest temperatures of -1 to +3 degrees with some patchy fog developing once again.

According to Met Eireann, Sunday will be mostly dry with sunny spells although mist and fog may persist in parts of the south. Highest temperatures of 6 to 9 degrees.