Offaly councillors want to get rid of unsightly election posters 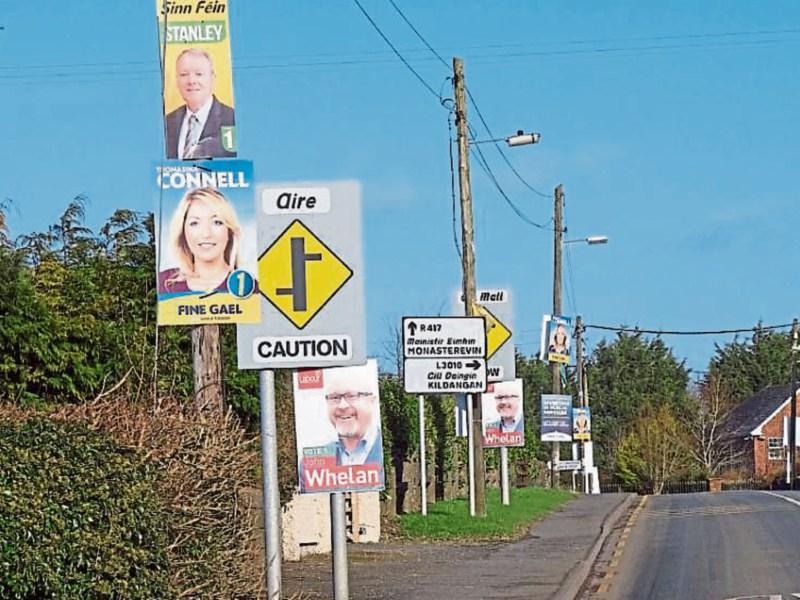 Councillors in Offaly County Council want to significantly reduce the number of posters during the local elections in 2024.

During local and general elections the candidates' posters are often the focus of heated debate because many people consider them unsightly and a litter problem.

During a recent Council meeting the councillors of Offaly County Council agreed that most of the posters should be done away with, while posters would be permitted in assigned locations only.

Cllr Ken Smollen moved the following motion and was seconded:

“That Offaly County Council creates designated areas throughout the county for the erection of posters for all future Local and National elections, that only one poster per candidate be permitted at each location and that the erection of election posters be prohibited in all other areas of the county.”

Cllr Smollen pointed out that when compared to the big parties, independent candidates and small parties can't afford to buy the same level of posters. “This leads to an unfair system whereby the candidates of larger parties are given an advantage,” he said. “Not only this, the posters are also eyesores.”

Cllr Seán O'Brien said he supported the motion. “The posters can be a blight in areas,” he commented. “We have all played the game. We know how competitive it can be. But the posters are pretty unpopular with the electorate. In Killeigh they banned the posters and it was observed by all the candidates.”

Cllr Mark Hackett agreed, pointing out that it has long been one of the Green Party's policies to do away with a lot of the election postering.

Cllr John Leahy also agreed. “I know that Tom Shanahan and the Council staff are working hard on the issue and it's hoped that the poster restrictions will come in place in time for the next local elections in May or June, 2024.”

Cllr Tony McCormack pointed out that the plastic on the posters is not recyclable. “The posters are often ending up in the ditches and the fields. They are not environmentally friendly. If it's windy weather they are blowing around the towns and villages and it looks terrible. I would definitely be in favour of restricting them to specific areas. We will need to discuss where the designated areas will be located.”

Cllr John Foley said if you do the groundwork then you don't need posters to promote yourself.

Cllr John Carroll said he always felt sceptical about the ability of posters to win elections. He pointed out that in Birr no election posters are allowed in the urban area.