"Just come out and say what you know and clear your conscience." 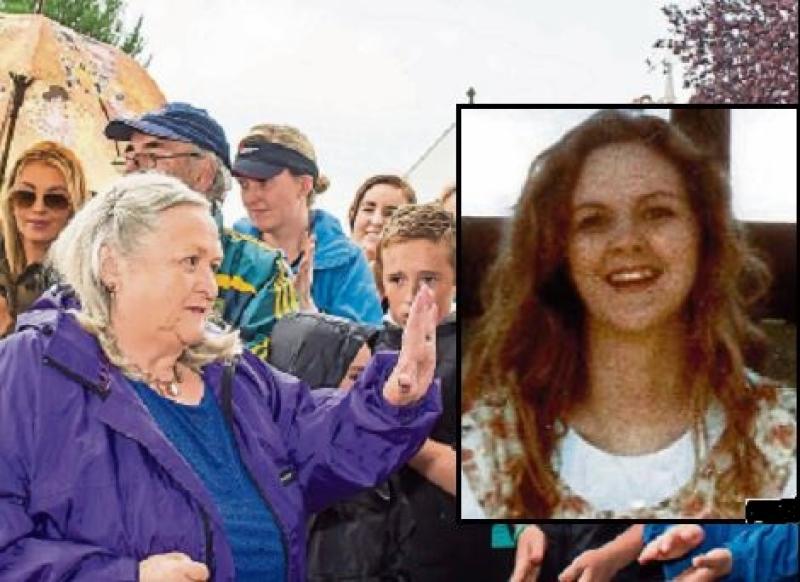 DESPITE a 25-year long investigation involving the questioning of suspects and searches in different locations, gardai appear to be no nearer to solving the mystery of the disappearance of young Tullamore woman Fiona Pender.

Prior to her death four years ago, Josephine Pender, the grieving mother of Fiona, repeatedly made public appeals for information on her missing daughter and unborn grandchild.

Mrs Pender passed away at the age of 68 in September 2017, less than a month after renewing her pleas on the 21st anniversary of Fiona's disappearance.

Speaking to the Tullamore Tribune at that time, she said it remained up to those with any information to come forward and she believed the person responsible for the disappearance had told others of what he had done.

“He has to have said something to somebody or got somebody's help. But they know and if they can live with it in their conscience I can't make them come forward and help us,” she said.

She said the years without Fiona were “a lifetime”: “It's tough but I still miss her terribly. We were such great old buddies and I miss her going shopping. Even when I hear things now and I would say 'God, I must tell Fiona that' and that's still there with me.”

She lost her son Mark in June 1995 to a motorcycle accident and just 14 months later her daughter, the hairdresser and part-time model Fiona, 25 years old and seven months pregnant, went missing.

Mrs Pender believed her daughter was murdered and her body buried and still hoped that one day her remains would be found.

She believed she knew the man responsible for her daughter's disappearance and death.

“He destroyed all of us. He didn't just destroy Fiona, he destroyed every member of the family,” she said.

“Fiona's baby would have been nearly full-term. Fiona was nearly eight months pregnant so that's a fully formed baby. When whoever harmed Fiona, the baby would have stayed alive for a while I believe, inside her body.

“And it's tough thinking of that. If we got to Fiona in time, when it happened, if we couldn't have saved Fiona we could have saved the baby.”

She said the investigation into Fiona's disappearance should continue and she hoped her remains would be found and given a Christian burial.

“I won't let her be forgotten. I still have visions of just finding her and laying her to rest properly with a bit of dignity. That was taken away from her.”

A year earlier, on the 20th anniversary of Fiona's disappearance, she said August 22, 1996, the date she last saw her, was “still like yesterday”.

Fiona was sharing a flat in Church Street with her boyfriend. She met her mother in the Bridge House for coffee, accompanied by Fiona's younger brother John, who was 12 at the time, and went to the Bridge Centre and bought some baby clothes.

They were to meet again the next day but Josephine knew something was amiss when she went to the flat. “I looked and it was all closed up as if there was no one there, the curtains were drawn. Fiona didn't like the dark, she always had some of the two curtains open so that light would come and shine in.”

Gardai began an investigation and a suspect known to Fiona was identified. “They brought them in for questioning but it's very hard to pin something on anybody without a body or without a crime scene,” said Josephine.

She made the following appeal: “Just come out and say what you know and clear your conscience. Not for me, for yourself, and see can we bring this to an end.”

Josephine Pender passed away four years ago without any answer to her heartfelt requests for information on her daughter.

A number of searches at different locations over the years did not turn up anything significant in the quest to find Fiona.

The nearby Grand Canal and a farm a number of miles away were the focus of early searches and then in late 2014, acting on information from a woman living abroad, a dig took place in the Slieve Blooms near Rosenallis.

The 2014 search resulted from information given to investigators by a woman living abroad who was linked with a man previously questioned in the case. No human remains were found at the forest site.

The late Mrs Pender always prayed for a breakthrough and her hopes were raised and dashed again when a man she believed to be connected to Fiona's disappearance was prosecuted for alleged crimes in a foreign jurisdiction but was not convicted.

“I am a person of faith. I have my faith. I'm not a 10 o'clock Mass-goer every day but I say my prayers and I have a good faith and I know she's up there in heaven with the Daddy and her brother and I would love to go and be with them,” said Mrs Pender, who worked in the Tullamore Parish Centre.

In a statement released on Monday, the 25th anniversary of Fiona's disappearance, a garda spokesperson said: “Fiona was last seen at approximately 6am on the morning of Friday 23rd August, 1996 when she was at her flat at Church Street, Tullamore.

“No person has been brought to justice for the disappearance of Fiona at this time.”

Fiona was described by gardai as being 5' 5" in height, with long blonde hair and wearing bright coloured clothing and white leggings.

They appealed to anyone that met, saw or has any information in relation to the disappearance of Fiona in the early morning of Friday, August 23, 1996 who had not spoken to Gardaí to please come forward and speak to their investigation team.

Gardai continue to appeal to any person who may have previously come forward who felt they could not provide gardai with all the information they had in relation to this matter, to contact the investigation team again.

Anyone with any information, “no matter how small or insignificant you might believe it to be”, is asked to contact Portlaoise Garda Station on (057) 8674100, or any Garda Station.

Anyone who wishes to provide information confidentially should contact the Garda Confidential Line on 1800 666 111.

Unions say pregnant teachers not being protected in Covid-19 response

Green light for extension to Community Centre in Offaly