Two incidents of theft and criminal damage at Meelick Weir 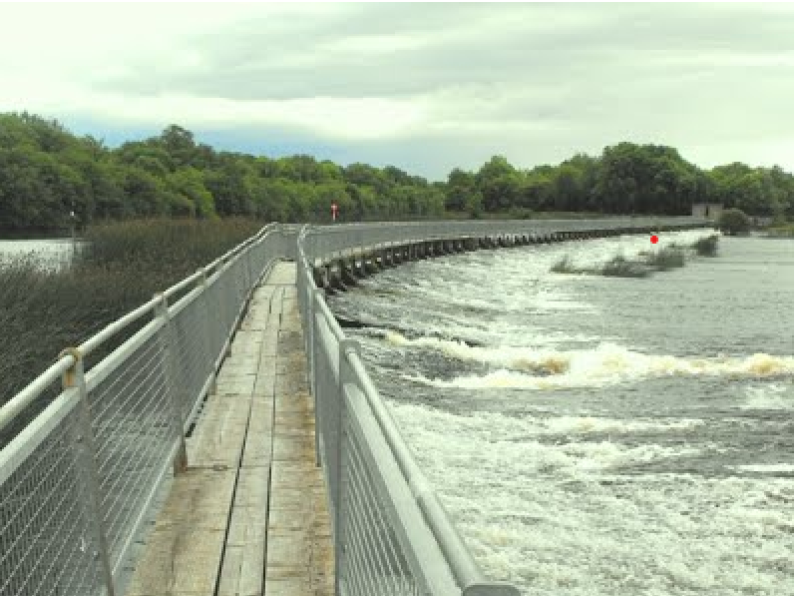 There have been two incidents of theft and criminal damage at historic Meelick Weir on the Shannon in recent weeks.
Waterways Ireland is currently carrying out a €2.8 million restoration project on the Weir and hopes to have the project completed by early next year.
Éanna Rowe, Western Regional Manager Waterways Ireland, said the first criminal act happened four weeks ago, when ten of the new, steel, tilting, weir-boards were stolen and a number of the other steel boards were tampered. He said it doesn't require much effort to remove the weir-boards from their location.
Two weeks ago criminal damage was caused to the concrete aprons beside the weir-boards. It's thought that a pick axe or a crow bar were used to cause damage to these concrete sections.
Mr Rowe told the Tribune that there is some CCTV footage of the perpetrators carrying out the vandalism and theft, and this footage has been sent to the Gardai, who are investigating the two incidents.
Meelick Weir was built in the 1790s as part of the Shannon Navigation. The weir is over 300 metres in length and has a 12-sluice barrage. It maintains and regulates the navigation level for the section of waterway between Athlone (Lough Ree) and Meelick (Lough Derg).
A local farmer speaking to the Tribune said the vast majority of locals are very keen to see the completion of the weir's restoration works and the opening of the new walkway across the structure. "Most people are very disappointed and upset to see this vandalism and theft," he said. "We can't understand what could possibly motivate people to behave like this. It can't be the flooding problem on the Callows, because it's wrong to link the Weir to that."
Éanna Rowe agreed. "The weir did not cause or exacerbate the bad flooding in the Callows region during July and August. In fact, the sluice gates were completely open throughout July and August to try and ease the flooding as much as possible."
"I believe that Waterways Ireland," added the farmer, "which manages the Weir, is doing its best to manage the flooding problems, when they arise, as best as it can. The simple fact is that when there is an awful lot of rain then what you do at the Weir is immaterial; you are still going to have flooding.
"We are really looking forward to have the walkway open again. We campaigned for it for ten years and were very happy when the restoration works finally began. It will once again link the two communities of Meelick and Lusmagh on both sides of the Shannon."
Éanna Rowe said the restoration is a very important project for Waterways Ireland. "This is our largest project since we restored sections of the Royal Canal. Meelick Weir is an iconic, much-loved structure and we are doing the best restoration job that we can. If it hadn't been for the summer flooding we would have expected to have been able to officially open the new walkway in October. As it is, it should be open before the end of 2020. The new sluice gate system with the tilting weir-boards, should be operational by early next year." He said the walkway will form part of the new Beara-Breifne Way. Parts of the Beara-Breifne Way are already open, including the section from Portumna to Meelick, a section which is receiving considerable praise from walkers.