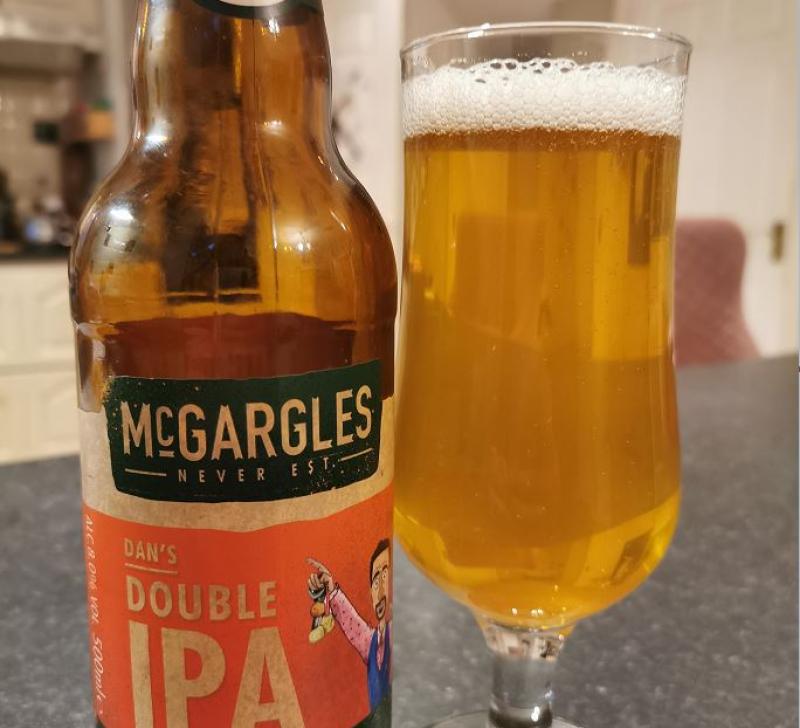 IT'S been a while since I picked up a McGargles brew from Rye River who comically refer to themselves as 'Never Established' and I usually prefer to support the independent off licences where possible.

However, that isn't to say the larger supermarket shelves aren't fully equipped with some of Ireland's best brews too.

In fact, I can always be assured of finding the same range of beers in supermarkets, consistently, which is something I like and McGargles are always on show.

On the label of this week's beer for review, Dan's double ipa, which is a whopping 8% abv, is the hand drawn cartoon artwork and the new brand labelling which I'm reliably told is the gentle moving away from the original branding which is now thought to be a form of paddy-whackery, as is the name.

In time I'm sure they'll drop the artwork and label altogether and I for one will miss it when they do.

Time to crack this brew open and get it in the glass.

The head on top of this beer is a little wispy for my liking but is instantly made up for by the intense aromas of grapefruit on the nose. There's a nice biscuit aroma too and a candy sweetness from the residual sweetness.

This beer has a really good body to it and an almost syrupy sweetness that's cut through by the strong bittering hops coating my tastebuds.

Resinous, with stone fruit flavours this tastes like a heavy hitter and doesn't pull any punches. Some beers hide their alcohol strength really well and although the alcohol here is not too warming, the rest of the beer let's you know it's a big beer and meant to be savoured.

It's amazing how much grapefruit-like bitterness there actually is in this beer without the addition of any grapefruit at all.

If you manage to pick one up, do check the best before date to make sure it's fresh as most of these supermarket beers are still unrefrigerated.

Craft beer reviewer Brendan Sewell is a Tullamore-based chef, award winning brewer, founder member of the Midlands Beer Club and creator of the Views on Brews YouTube channel. He writes a weekly column for the Tullamore Tribune and Midland Tribune.