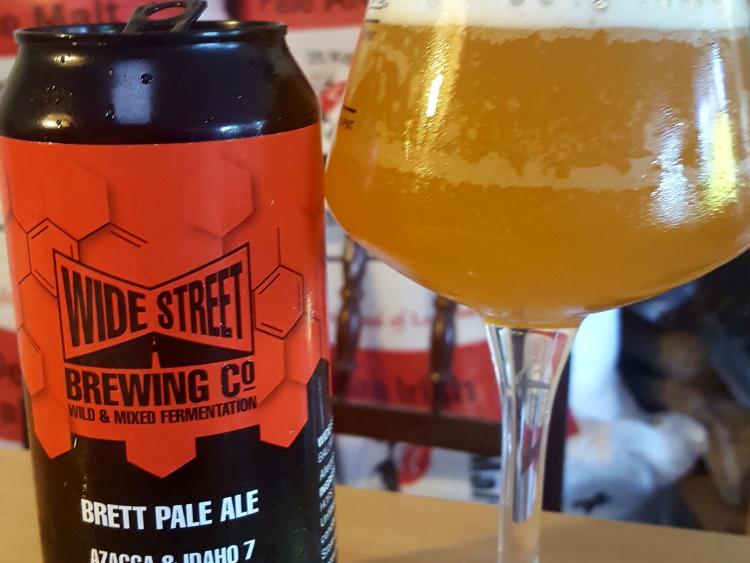 WIDE Street brewing company in Ballymahon, Co Longford has had a great first year of brewing wild and mixed fermentation beers.
One of their first beers, Brett pale ale, intrigued me a lot as it's a beer that evolves in the can over time.

Brettanomyces yeast strains are considered wild although that terminology is debatable in my opinion as "Brett", or British fungus as the name translates to, is now widely used and various strains of the yeast have been separated and cultivated for specific brewing use whereas historically, the yeast might have been considered an infection, particularly in wine.
Brett yeasts impart aromas that may at first seem unenjoyable but, much like some strong smelling cheeses, Brett grows on you and when you get used to it, the aromas are both pungent and nuanced at the same time.
This week's beer for review is simply titled Brett Pale ale and is a very sessionable 5%.
The beer was canned last July and is can-conditioned with champagne yeast.
Over that time the beer has metamorphosised from an easy drinking, medium bodied, hoppy beer with light Brett character, into a full-on, light bodied, dried out, leather scented Brett bomb.
The beer pours a delicate shade of light orange with half a finger-width head on it.
Citrus aromas meld with masses of barnyard, hay, leather-horse-saddle, funky, and wild notes.
Having cellared this beer for 10 months the Brett has done its job and taken over.
The hops have died down leaving minimal fruity tones and the beer is now thirst-quenchingly bone dry.  Perfect for the arid weather conditions we've been treated to recently.  Although Brett does take a bit of getting used to it is an incredible taste sensation and I would strongly urge picking a few Wide Street Brett pale ale cans and trying one each three months of a year to really appreciate the changes over time.
Very enjoyable indeed!