A statue commemorates him near Clonbullogue 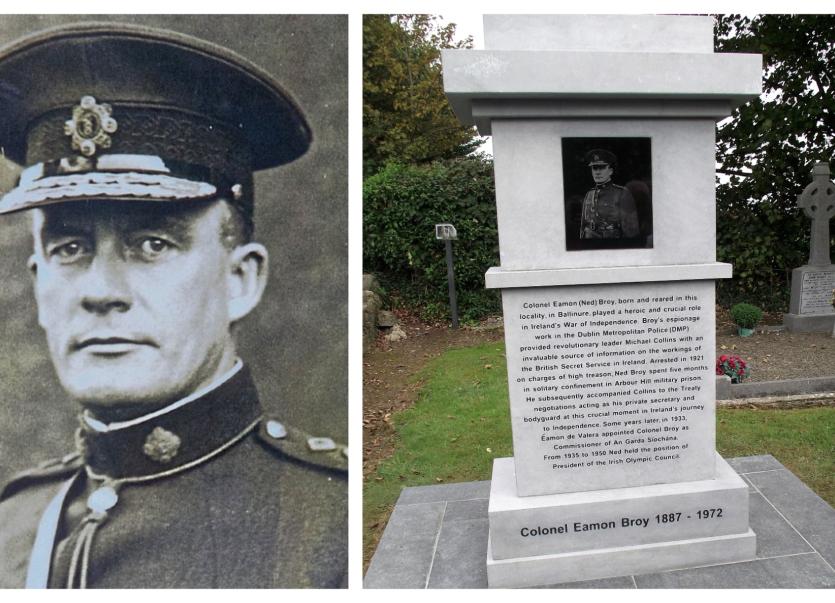 One of our best men – that is how Michael Collins described Ballinure, Co. Kildare native Eamon Broy before his own death at Béal na Bláth in 1922. The man in question led a remarkable live that saw him become a Colonel in the Irish Army, Garda Commissioner, and the man credited with saving Michael Collins' life on more than on occasion.

Collins' glowing assessment of Broy was revealed during the 2016 unveiling of a monument in his honour, which now stands at his graveside in Coolygagen cemetery on the Clonbullogue-Rathangan road.

Eamon, or Ned Broy, as he was commonly known, was born in 1887 and grew up in Ballinure on a farm on the Offaly/Kildare border.

He attended mass in Clonbullogue and attended school in Rathangan, where he showed great proficiency for languages. He learned French and German during after school classes, and these language skills would later become very useful as he used French to give a tip off to Michael Collins that the British controlled G Division were about to arrest him.

Ned Broy was played by Stephen Rea in the famous Hollywood film about Michael Collins and had many guises in his long life, but to the local people around his home community, he was referred to simply as ‘The Colonel.’ Ned Broy joined the Dublin Metropolitan Police in 1911, initially in E Division, before being moved in 1915 to the famous G Division where he was a clerk.

During the War of Independence, G Division was employed as an active intelligence agency against the IRA, but Ned Broy acted as a double agent, often feeding crucial information to Michael Collins about the activities of G Division detectives.

Indeed, a Garda spokesperson told the gathering at Coolygagen at the unveiling of a statue in his honour in 2016 that Broy was credited in some quarters with saving Collins’ life on more than one occasion. He even once smuggled Collins into the headquarters of the G Division and their archives at Great Brunswick Street, and at one point cloned the masterkey, using it to lock the dormitory door upstairs where all the Dublin Metropolitan Police men were sleeping. 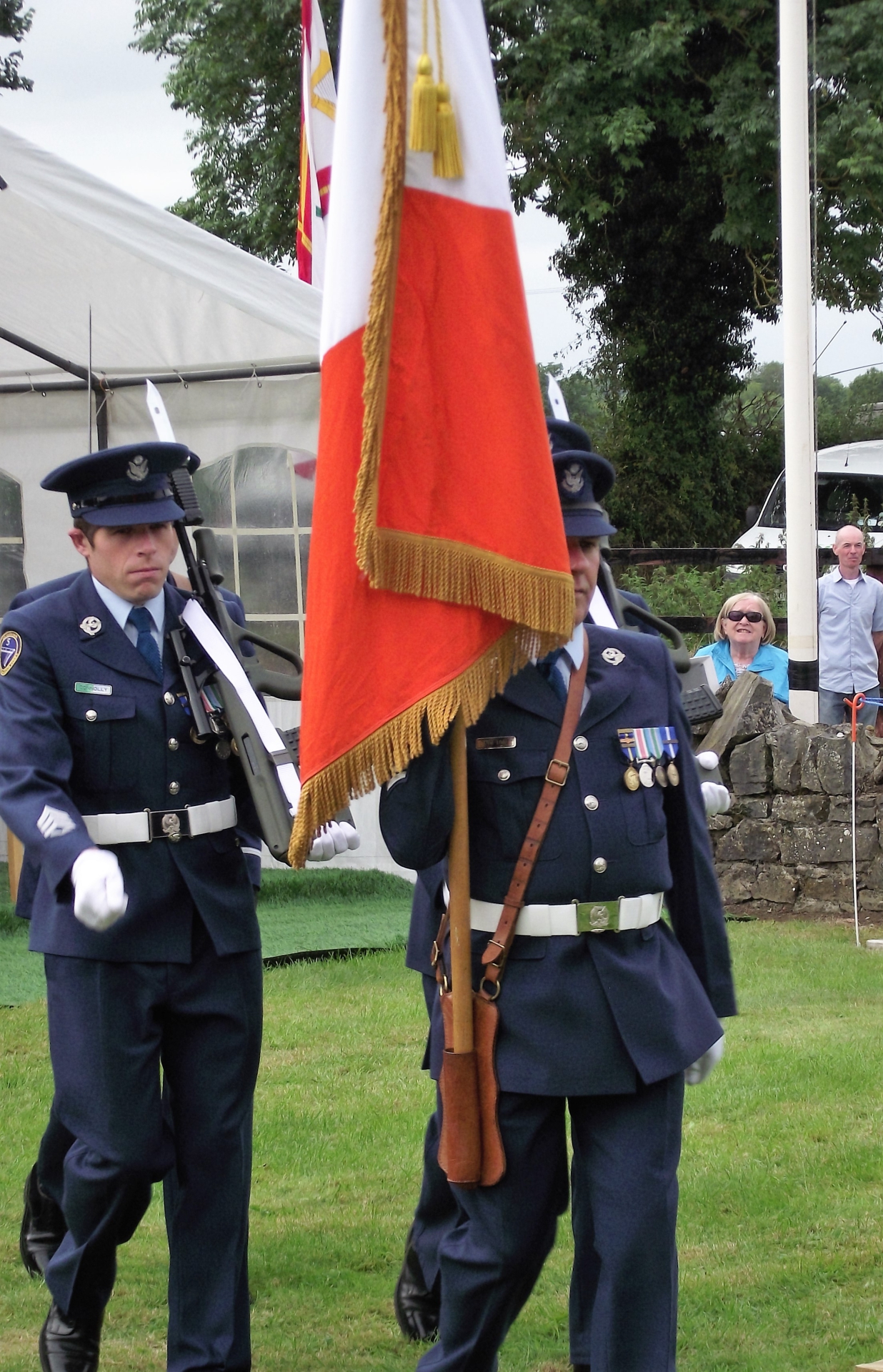 PICTURED: The Tri-Colour is lowered and marched from Cooleygagen following the Broy memorial event in 2016

Speaking at that 2016 event, Ceann Comhairle Sean Ó Fearghail said: “The independence, freedom and democracy we
have in this country is something people like Eamon Broy took huge risks to achieve, and is something that we today must not take for granted.”

The act of passing information to Michael Collins and the IRA was an act that put Ned Broy’s life in great danger, and he was once interred in solitary confinement for five months on 56 charges of High Treason for such patriotism. He was later released under the War of Independence Truce.

He became the Garda Commissioner in 1933, a position he held for five years, and has been described by senior Garda officials as “one of the Garda Síochana’s heroes.” He established the Auxiliary Special Branch within the gardaí during his tenure. Some of the systems he established in An Garda Síochana are still in place to this day.

Eamon Broy also held the position of second-in-command of the Irish Air Services, and in his lifetime held a number of important positions, including President of the Olympic Council of Ireland and Garda Commissioner, a position he was appointed to by Eamon De Valera in 1933.

In 1948, he led the Irish Olympic team to London and in that same year was received by King George VI at Buckingham Palace, an ironic meeting given the fact that 27 years earlier he was in Arbour Hill on charges of High Treason against the British Monarch.

Eamon Broy’s daughter Áine Broy regularly visits her father's grave at Coolygagen and said at its 2016 unveling that "the monument is the first local recognition of his contribution to our history, and I am so glad to have lived to see this day." 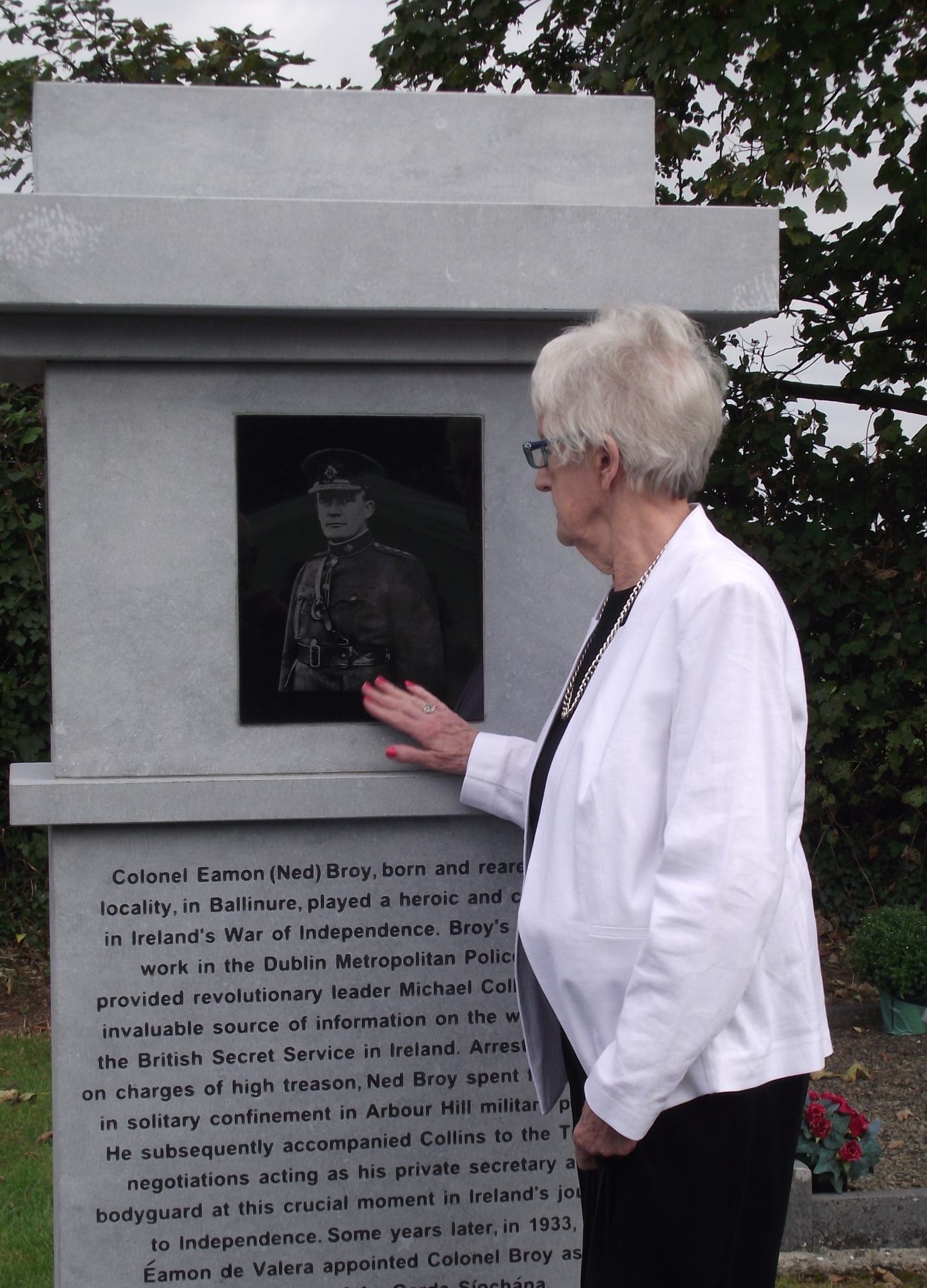 PICTURED: Aine Broy admires the monument unveiled in memory of her father Eamon 'Ned' Broy in 2016

His home was always Ned's first love, no matter how daring his escapades during the fight for Ireland's freedom, and that sense of place is summed up in a quote from the man himself before his death:

“Looking back on those years among simple country folk, life seemed to be warmer and richer than anything experienced since."

Ned Broy will always be remembered as a patriot, a man of Ireland, and a key cog in the wheel that brought about Irish independence almost 100 years ago.

He died in 1972 having lived a full life, a life in the service of the country he loved so dearly.