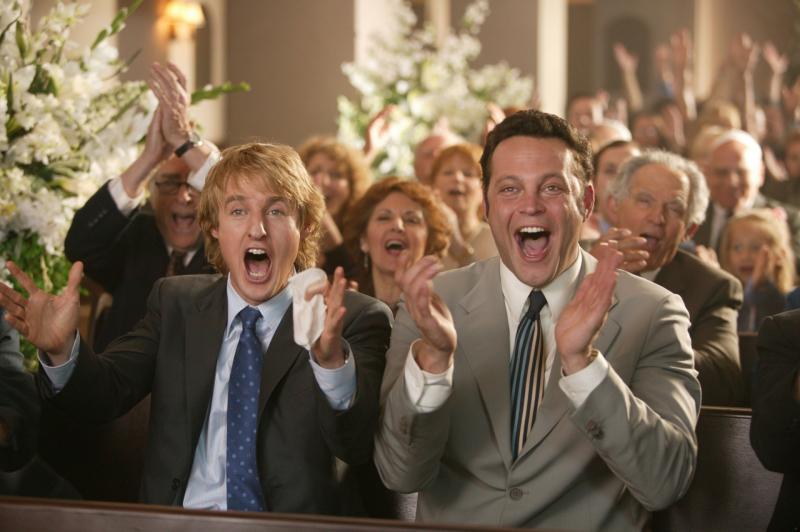 Standard snide question shared with another female wedding guest when you think the bride's mother looked a state. 'Mutton dressed as lamb doesn't do her justice.' Who does she think she is at all?'

The venue, the theme, the dress, the menu, the groom! This statement could apply to any of these and is generally a cutting dig at the bride and groom's choices. Yeah the top table was nice, and draped in white lace and all the rest, but I'd have gone for a round one myself. Sure Jazus, Paddy is stuck at the end talking to the priest for the night now!

3. Who are we sitting with?

Crucial question to ask. The usual wander over to peruse the table plan with the highfalutin theme like names of places the bride and groom have visited during their amazing, beautiful, special....(*give me a bucket) relationship. We're on 'Sydney.' The other people at the table you're on will determine the craic had at the wedding. You don't want the non-drinking great-aunt and uncle.

You're sitting with the lad from the football team who has the girlfriend with the big job up in Dublin. The girl just can't talk about anything else. 'I don't care how high up she is in that f**king job, I'm not sitting beside her. I wish we were sitting at 'Thailand.'

SEE ALSO: 20 things your aul lad said to you on the bog growing up

Uttered under your breath to a friend as you go into full E! News red carpet mode and analyse the whole day at about two in the morning. Dissecting every aspect of the day, from the 'over the top bridesmaids,' to the drunk cousin who has falling asleep in the toilets.

Everybody missed the free wine. Was there free wine at all? We went home for two seconds after the church so Mary could top up the make-up and somehow we missed the drinks reception. There isn't a glass of Aldi Prosecco to be seen anywhere and you're absolutely raging at this situation. You're tempted to take €50 out of the card!

7. The drinks reception was short lived, wasn't it?

The issue of missing the free drink comes up again at the meal as the table of random guests bond over their disgust at not getting a drop on the way in. 'You'd think they were short a few bob.'

8. There's one inside in the bathroom locked...

The drunk cousin from earlier (before she falls asleep) is falling all over the shop in the ladies toilets and Jazus, the aunt and uncle over from England are disgusted. A gaggle of slightly less tipsy female cousins will converge to sort her out - usually haul her to bed and say no more. She'll re-emerge for the DJ!

'It was a bit tough, wasn't it?' Everyone knows going for the beef at a wedding is a lottery. It's either 'falling apart' or 'tough as aul boots,' and some wedding guests are all too delighted to put the boot in when they're still chewing it at the breakfast.

There's always that one scabby guest (usually a friend of the groom) who arrives with a random young one on his arm and not a screed of a present. He will be talked about for years to come, most especially at every other wedding within the same circle of friends. 'Sure, where do we cash a lousy congratulations?'

The night is going well and your table was better craic than expected. You're only getting into the swing of things when the bus that has been laid on arrives to ferry you home. A true friend will make this offer and you'll think it's a great idea until you're wandering down the next morning for the breakfast as the only one still in the wedding clothes.

SEE ALSO: 7 things your non-Offaly friends do and say to really annoy you

The fear sets in the next day and you know well you made a show of yourself but don't remember how. 'Sure do you not remember getting up on the stage during Maniac 2000?' 'Oh the lord Jazus, I don't need the postmortems!'

There'll always be one girl at a wedding that nobody seems to know and she'll be slaughtered by the other women. Whether she genuinely looks a state or has just outshone them all, she'll get the same frosty response. Gimp!

When the first bars of it play, all hell will be let loose. It's like releasing heifers at a mart and everyone is on the floor - literally. Some (the drunker ones) never recover and struggle badly to get back to their feet. They'll be routinely nicknamed 'Bambi' for evermore.

Trying to coax the reluctant singer to belt out something so you can all sing along. You keep telling yourselves that John and all of you are great, while the staff try to herd you out of the residents' bar. 'John has a great voice all the same, doesn't he?' John is probably actually useless as well, but no one notices.

16. Jazus the speeches dragged on, didn't they?

The bet on the speeches lasting an hour has come in, everyone is smiling and clapping wearily and cursing under their breath, as the father of the bride gives you a rundown of her life story. Slowly people start to sneak to the bar, scolded by the top table, and afterwards, everyone makes the same statement.

17. I thought the best man would never sit down...

The best man thinks he's Ricky Gervais during his speech and after promising 'not to keep you long,' goes into a 30-minute monologue about all the hilarious (inside jokes) stories about himself and the groom that nobody else understands. You can wink and nod all you like about that one night in Coppers, but we're still f**king lost!

You're not the bride and groom's biggest fans, and you make this statement as you discuss putting €200 in a card. But by Jazus, you'll invite them back to your wedding to make that money back. If they turn out to give less than you did, you will never speak to them again (or at least talk about them behind their backs for years).

Some girl's up style has gone badly wrong and you spend a couple of glasses of wine talking about it and trying to find out who her hairdresser was so you can avoid them. You soon find out, 'she did it herself?' Ah no wonder she ended up like that so!

20. Will you be having wine with your meal, madam?
The most pointless question ever asked. You proceed to scoff at the young waiter - Will I what? 'I've got the day off work for this, I'll be inhaling wine quicker than you can get it to me.' That's what you say in your head – but to him you just reply politely, 'Oh yes please, but just a small one...This girl always becomes the honourary leader of the 'Rock the Boat' brigade later in the night.