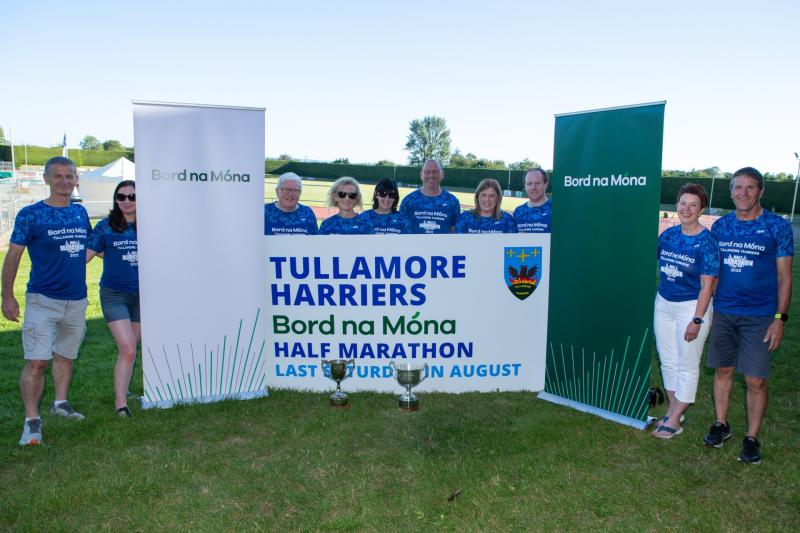 Tullamore Harriers and Bord na Mona officials at the announcement of Bord na Mona's deal to be title sponsors of the Tullamore half marathon.

BORD na Mona have come on board as major sponsors of the Tullamore half marathon, giving a major boost to the host Tullamore Harriers club as the race resumes at the end of August after a two year Covid enforced absence.

The half marathon took place for the first time in 2014 and has grown in popularity since then. The last race in 2019 had a sell out of 1,200 athletes and this year's event is almost full.

The race will take place on Saturday 27th August and is expected to attract 1200 participants from all over the country. The race will start from Tullamore Harriers Stadium at 11am, taking in a scenic route through Mucklagh, Killurin and Cloonagh before finishing with a lap of the stadium track. This race is ideally suited to anyone training for the Dublin City Marathon or simply wanting to go the distance over 13.1 miles.

Roads are closed for the event and it is a huge logistical undertaking for Tullamore Harriers, requiring a large number of volunteer workers and support from Gardai and medical personnel among others.

Some top class athletes will compete in both the mens and ladies races. The men are competing for the Quinlan Cup – the cup was resurrected as the top mens' team prize for the half marathon a few years ago and it occupies a pivotal place in the history of Tullamore Harriers. Named for a leading figure in Offaly and Tullamore athletics in the 1940s and 1950s, Ned Quinlan, it started out as a cross country event before becoming a hugely popular road race around town – its list of past winners include athletics heroes Eamon Coghlan, John Treacy and many more. Ned Quinlan was born in New York in 1892 but his parents came back to Ireland in 1900, settling in Killavilla and he went on to become a Garda Detective in Tullamore.

The top ladies team will compete for the Phyliss Delaney Cup, named for a great club worker and juvenile coach in Tullamore Harriers back in the 1970s and on.

For almost 70 years, Tullamore Harriers has been a significant contributor to the local community providing sporting facilities and attracting thousands of visitors to Tullamore each year with the Stadium hosting national and regional athletics competitions. It has a membership of over 500 and expert coaching is provided in both Track and Field and Middle-Distance training. Many of the senior and veteran members have been with the club since childhood.

The club has carried out an extensive programme of refurbishment in recent years. A new state of the art tartan track has been installed along with a new all weather pitch, which is very well used by Tullamore Hockey Club and local soccer teams. The heating and plumbing system has also been refurbished in their impressive club house as they have embarked on a serious programme of capital investment.

Sharon Doyle, Head of Human Resources Bord na Móna said, “Bord na Móna has been a proud member of the midlands community for many years and we are delighted to support the Tullamore Harriers Half Marathon, which is now the fastest growing half marathon on the Irish race calendar.”

The race will pass the house of Sharon's parents, Ger and Angela Fogarty at Ballincanty, just before the half way stage, and she commented: “This event is a celebration of the hard work of these athletes and the important role that Tullamore Harriers plays in the wider community for athletics. Like Tullamore Harriers, Bord na Móna continues to grow and develop while creating opportunities for the midlands. We look forward to seeing everyone taking part and celebrating their involvement.”

Mary Daly from Tullamore Harriers said: “We are thrilled to have Bord na Móna as main sponsor of the 2022 Tullamore Harriers Half Marathon. Both Bord na Mona and Tullamore Harriers have served the midlands community for over 70 years and Bord na Móna is one of the largest employers in the region. Despite the disappointment of having to postpone the previous events due to the pandemic, Tullamore Harriers is looking forward to an even better event in 2022. We expect that there will be over 1200 participants from all over Ireland and this will help raise funds for the club’s facilities and the services it provides for the community. The race will be a great day of fun and celebration and we encourage everyone to sign up for the half marathon or to come along to support the participants.”

The race is also the final event of the Offaly Endurance Road Race series, incorporting a 10 k, 10 mile and half marathon. It also doubles as the Leinster half marathon championship and there are a large array of individual and team prizes on offer, including age category ones.

Runners in the Tullamore half marathon will compete for both the Offaly and Leinster Half Marathon Championships. There will be cash prizes in addition to the team trophies. There are prizes for 1st, 2nd and 3rd seniors and age category prizes for first and second in over 40, 50 and 60. Teams of four will compete for the Quinlan Cup for men and the Phyliss Delaney Cup for ladies.