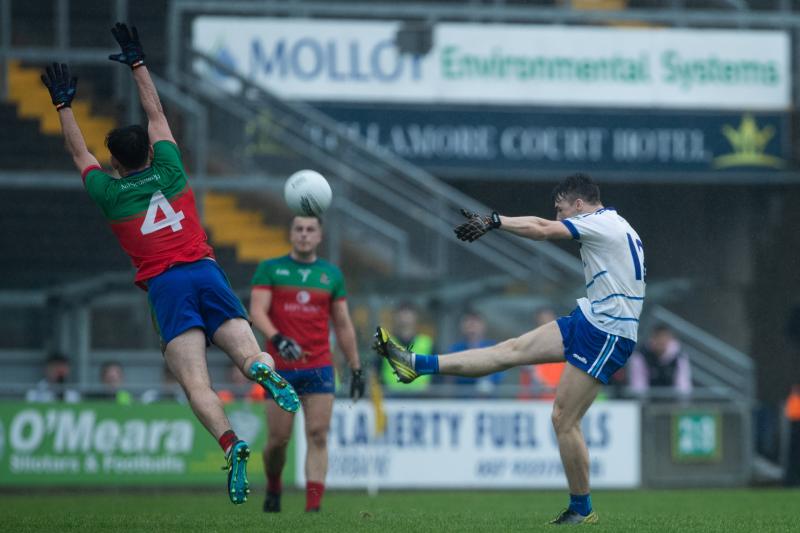 THE quarter-final pairings in the Tullamore Court Hotel Senior Football Championship will be known next Sunday when the final round of group games take place.

So far only Tullamore and Rhode are sure of their place in the knockout stages – Tullamore are in the semi-finals no matter what happens against Cappincur and Rhode will join them if they beat Clara on Sunday.

Ferbane, Cappincur and Durrow are all on very dodgy ground with a gun to their heads. In group 1, Tullamore are top with four points, Shamrocks have two and Ferbane and Cappincur have one each.

The top team goes into the semi-finals with the next two in two quarter-finals. Shamrocks should be okay though they would be out if they lose here and Cappincur beat Tullamore while Ferbane and Cappincur have a gun to their heads.

Ferbane play Shamrocks but even if they lose here, they could still scrape through. Despite performing with typical bravery, Cappincur are underdogs against Tullamore and if this result goes as predicted, a point may be enough to get Ferbane through – Ferbane's scoring difference is -2 points, compared to -5 for Cappincur and while this is very little, it is unlikely to be flipped, even in the case of Cappincur shocking the champions.

Rhode are safely through with four points in group 2 while Edenderry and Clara have two points ach and Durrow are on none. However, this group is not clearcut. Rhode will be warm favourites to beat Clara but Durrow still have a chance, albeit an outside one. They play Edenderry in their final game and while underdogs, an upset is possible here – if that happened, you would probably have Edenderry, Clara and Durrow on two points and in that case, Clara would probably be squeezed out. The scoring difference is: Edenderry +5, Clara -5 and Durrow -6.

While Ciaran Egan is likely to be out through suspension in addition to Tullamore's long term injuries, it would be a big shock if Cappincur win here. They have beaten Tullamore before and relish playing their big town rivals. Cappincur have great spirit but Tullamore have moved onto a different level in the past year and they won't want to lose this one, even if they have a semi-final place already in the bag.

It has been a strange year for Ferbane. They have struggled so far, drawing with Cappincur and losing to Tullamore, yet they have the potential to emerge as very serious contenders. They hit Tullamore with everything they had in their last game, displaying tremendous determination but forgot that they had to play a bit more football to win it. This game will tell more about them. Shamrocks will provide a good test and had a good win over Cappincur in the last round. It sets them up for a quarter-final and Shamrocks are capable of playing some good football. A win will put Ferbane through while a draw will be enough for Shamrocks. A defeat could put Shamrocks out but Cappincur would have to beat Tullamore for that to happen. It looks like both will go through but neither will want to be relying on favours.

Clara's biggest game of the year was against Durrow in the first round and it looks like their win here will get them into the quarter-finals. They were very poor in their defeat by Edenderry in the last game and are clearly in transition. Staying up is their priority. Rhode have motored well. They are missing players but are well capable of winning the championship. It will be a big surprise if they won't win here.

Edenderry and Durrow could well provide the game of the weekend. It is the most interesting of them, on paper anyway. While Edenderry are definite favours, Durrow could cause an upset. They got to the semi-finals last year and have a lot of very good footballers. Edenderry have gone okay without being brilliant. They competed well against Rhode and did what they had to do against Clara in the last round. David Hanlon will be back from suspension for this and Edenderry can expect a very tough battle. A Durrow win would not be a massive surprise.