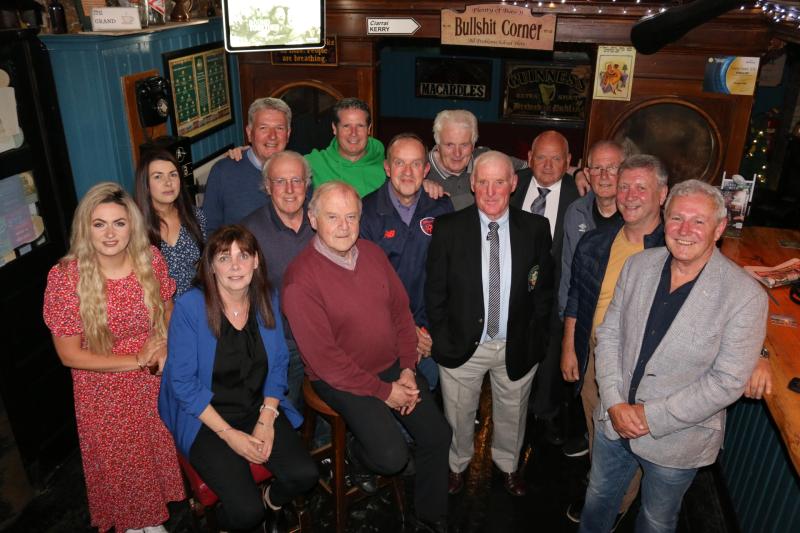 The attendance at the presentation function for veteran referee Mickey Flanagan, Tullamore.

On Wednesday night last, July 27th, Michael ‘Mickey’ Flanagan was honoured for his lifetime service to refereeing by the FAI.

A large gathering of people attended the event in Fergie’s Bar to congratulate the popular Tullamore character on his much-deserved recognition.

Officiating the event was FAI Referee Observer and proud Athlone man, John Stacey. John was a referee himself who officiated at the highest level of international football.

“It is with great pleasure that I get to officiate this tribute to Mickey Flanagan for his wonderful service to not just refereeing, but for all his great work and involvement in grassroots football over the years,” he began.

“Mickey’s early years as a player were with Knockville and Tullamore Town FC. On retirement from playing, he got involved with Tullamore Town FC where he offered his help in many ways including operating as groundsman where everything he did went into making Puttaghaun the best it could be for any game that was played there. It was irrelevant as to what standard the game was. The pitch was prepared to be as immaculate as one could expect. Mickey also took a great interest in looking after each player and, of course, referee that attended this famous ground and I’m sure they are eternally grateful for his friendship, help and support during their visit to Tullamore.”

“It was during the mid to late 80’s that I met Mickey on one of my first visits to Puttaghaun, and wow, I was immediately struck by his welcome and his desire to make sure I was made feel at home and not in need of anything for the game. He never left any request unattended and completed them with a smile and respect.

“Over these early years and many conversations with Michael I learned that he was also very interested in refereeing. He would regularly give a valued opinion on a happening in a game and he would always try to see and understand the referee’s decision. Soon afterwards, he took up refereeing himself and his love for it was mesmerising. This is evident by the fact that on weekends, despite not having a car, he could be seen on the road in the rain or snow hitchhiking to ensure he was getting to his games whether it was to Athlone, Birr or further afield.”

“Mickey was a very valued member of the Midland Branch of the Irish Soccer Referees Society (ISRS) and again his commitment can be underscored by the fact that he would again be seen hitch hiking to the Branches meetings in Athlone or Ballymore.

“Mickey can still to this day be seen attending every Senior FAI Cup final where he is dressed in his referee's grey slacks, blazer, shirt and tie which again displays a mark of the man he is.”

“In later years he took up refereeing in the schoolboys/girls’ league (MSL) where he gave undoubted credence that a referee is a valuable coach to children. He demonstrated this during his games by taking time to not only talk to, but listen to the children and he would regularly be thanked by said players and their parents afterwards.

“Finally on behalf of Myself, the FAI, the Referees and the players we would just like to say

a huge ‘Thank You’ and wish Mickey the best of health and happiness into the future.”

Mr. Flanagan was presented with a clock to mark the countless hours he dedicated to football over the years, an official plaque from the ISRS Midlands Branch and a framed letter of appreciation, penned by John Stacey, on behalf of the FAI, referees and players.

Mickey thanked all who attended and showed his deep appreciation on what was a very special night for the legendary Tullamore referee.