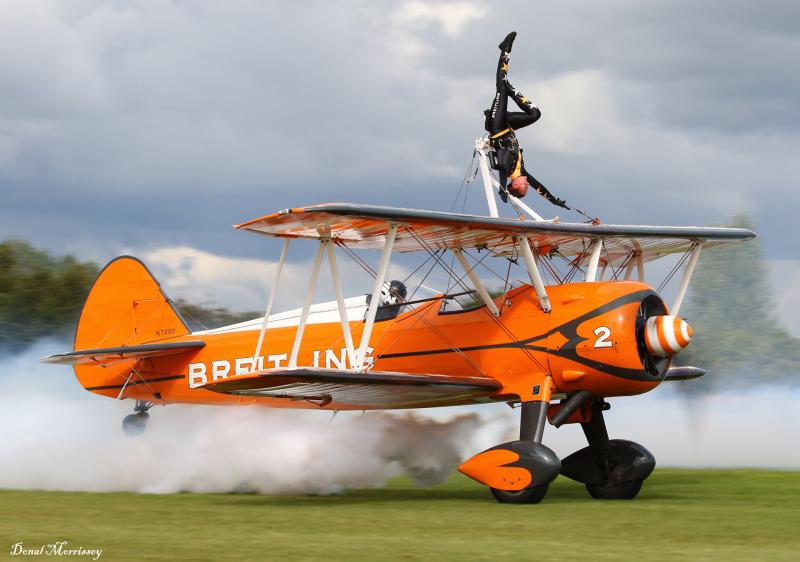 The spectacular wing walkers will wow the crowds in Birr again.

AFTER a three year gap Birr Airdisplay is back on August 1st with its biggest show in its 10 year history.

The many thousands of spectators each year at previous shows know how truly unique this event is. It’s Ireland only over land airshow and one of only a handful throughout Ireland and the UK that is based at an Aerodrome meaning visitors can see aircraft take off and land and meet the pilots.
Birr Airdisplay will showcase the best of Irish, UK and international aerobatic pilots and and display teams. As part of their 100 year celebrations the Irish Air Corps will have a special display with their Silver Swallows display team of PC9’s along with a helicopter display and static stand showcasing their history and giving information about joining the Air Corps. This year will see the first visit of the Royal Jordanian Falcons to Birr displaying their exciting four ship Extra 330 aircraft. The Royal Jordanian Falcons are one the top international display teams and only perform at a select number of air shows throughout Europe each year.
Other Irish talents will include Gerry Humphrey’s in his RV7 “flying Cow”, David Bruton based in Abbeyshrule displaying his Sukhoi SU31, Sligo’s Andrew Fenton in his Christean Eagle and the flying dentist Eddie Goggins in is Mudry CAP.

The ever popular and talented Team Raven from Wales will be back with their brand new RV8 addition bringing their display team to six aircraft and always put on a stunning show. Over the last number of years Team Raven are building a reputation for themselves that rates them as one of the top European display teams. This year’s Team Raven display will be sponsored by Hugo Loonam Motors Cloghan. Birr Airdisplay are delighted to partner with Hugo Loonam Motors for the 2022 Airdisplay.

The jaw dropping display of the Aerosuperbatic wing walkers are back. The wingwalkers are a real crowd thriller as spectators can watch them prepare on the ground and as the professional wingwalkers strap themselves to the wings of their Boeing Stearman aircraft. If you want to see the most amazing take off and hear the gasps of thousands of spectators then you will have to be there to watch Richard Goodwin take off and display his Pitt’s special biplane as it is one of the most unique displays that can be seen at any Airdisplay in the world.
The sound of the Coastguard Sikorsky S92 up close is something not be missed and watch as they display the awesome rescue helicopter. The Irish parachute club based in Clonbologue will be on hand to show their talent completing and formation parachute jump on the runway.

And if that wasn’t enough for the second time they will have the a display from the iconic Mustang P51. The P51 display is a sight to behold with famous roar of it roll Royce merlin engine. This year's P51 is known as “Contrary Mary”.