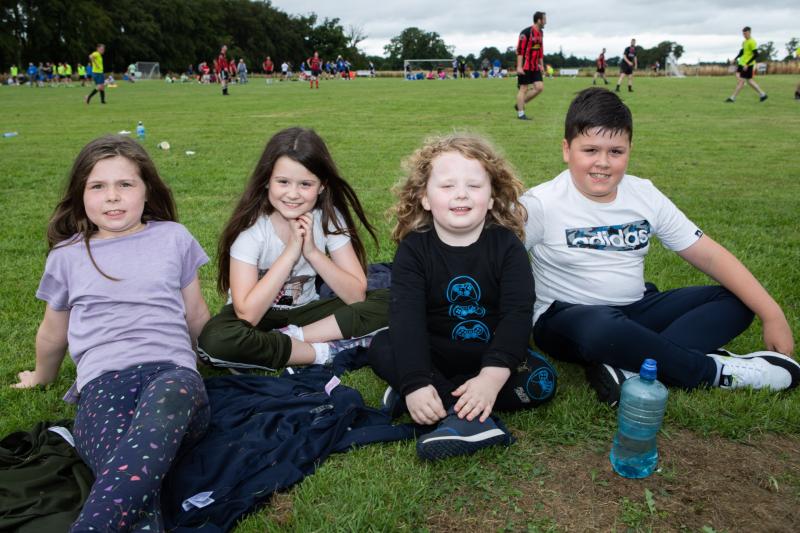 Thankfully the heatwave that brought temperature close to 30 degrees Celsius across the country over the last ten days or so relented to produce milder conditions sprinkled with some showers and a cooling breeze as 16 teams competed for the inaugural running of the Coolraine Football Club blitzes – for the for Paul Jordan Memorial Cup and Simon Walsh Shield.

Proceedings got under way at 11 am as the four groups of four teams began across the three pitches to decide who would go through to the quarter finals, the knockout stages where there are no second chances. The four groups at the start were as follows:

Group B: Penthouse FC, About to get Messi, The Goalpost, The Lantern.

Refreshments were available with ample tea and coffee from Jordy's Coffee, allowing those in attendance to enjoy the football without having to make the journey to the nearest shops and hot food was provided by Noel Kelly. An ice cream van was also in attendance to cater for those wanting such treats in the warm conditions that prevailed throughout the day despite some heavy showers that fell.

The ground and its surrounds were in pristine condition due to the hard work put in by committee members and players over the last month or so and after several pulsating contests, the cup final was between the Brewery Tap and Penthouse FC. The Brewery Tap side, put together by Coolraine player Rob Murray, emerged as the winners by 2-0 to gratefully claim the inaugural Paul Jordan Memorial Cup 0f 2022 with Paul’s family there for the presentation in Fergie’s Bar afterwards in front of a large attendance. Coolraine also presented a bouquet of flowers to Ann-Marie Walsh, representing the family of Simon Walsh for the presentation of the Simon Walsh Shield to the victors, Bayern Never Losin.

The club would like to thank all who ensured this day was a success, to all those who officiated during the games and the club members who volunteered on the day for what will now become an annual event due to the remarkable support for this tournament. Club Secretary Jamie Hensey superbly organised this competition and made the rules transparent for all to follow that allowed such a swift turnaround between games and remain on schedule as several teams had travelled from outside of Offaly to participate.

Tommy Feehan organised the clean-up afterwards to ensure that the facilities are in condition for the return of pre-season training on Tuesday night, in an operation that highlighted the team spirit within the club as we eagerly await the new season. The club would like to thank all our sponsors who made this occasion possible, Fergie’s Bar for sponsoring the cup and holding the presentation and Loughman Landscaping.

The Over-35s were presented with their winning league medals from last season as they went close to recoding a historic double only to be denied in a controversial 3-0 defeat to Portlaoise in the cup final, where some decisions made are still debated today as to how they were arrived at. Their campaign this year was rewarding as they played some nice quality soccer and allowed several players valuable game time ahead of the new season.

The second squad management team of Tom Feehan and Michael Hensey are eagerly looking forward to the season ahead and are in the process of trying to arrange some pre-season friendlies with local clubs as they prepare to tackle their division. Details of all friendlies will be reported on in due course and where possible, a brief analysis of how the teams performed.