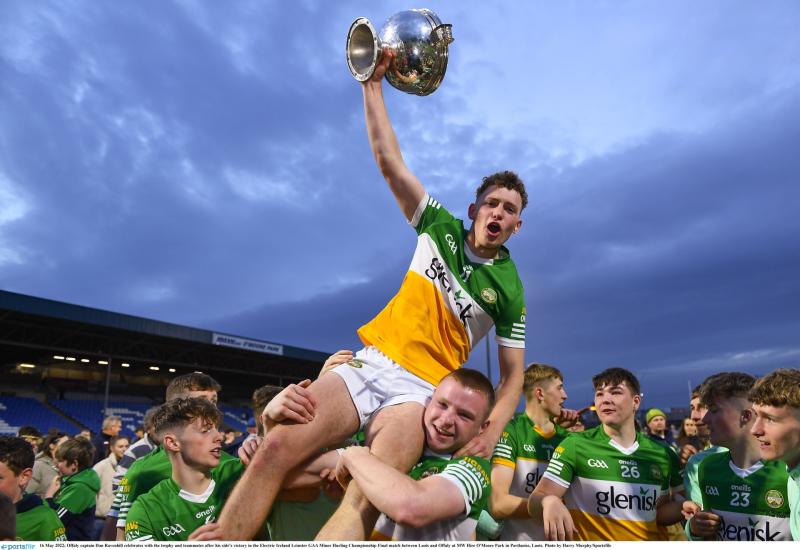 IT would not have been known as a hotbed of hurling activity but Durrow's contribution to Offaly county teams has been one of the big changes to hit the game in the county in recent years.

Ciaran Burke, Ross Ravenhill and Brian Duignan have all emerged as key members of the Offaly senior hurling team in the past two years - and now Ross Ravenhill's younger brother Dan will captain Offaly in Sunday's All-Ireland Minor Hurling Championship final against Tipperary.

It has been a remarkable development, one that people didn't see coming but Durrow is now at the hub of Offaly hurling. Durrow GAA Club doesn't field a hurling team and hasn't done so in several years – prior to that they fielded hurling teams, winning the occasional junior title but the game was very much behind football in their list of priorities.

Durrow and Ballinamere joined forces finally back in 2006 – they had a failed one year attempt before that in 1994 but the newest one has stood the test of time and has now reached the stage where it would be absolutely ludicrous to revert to fully separate clubs, each fielding football and hurling teams.

It has reaped great success for both. They have each encountered the traditional problems that dual clubs meet but both Ballinamere and Durrow are now senior. Durrow did very well to reach the senior football semi-final last year while Ballinamere are now a decent senior hurling team with a lot of the raw ingredients needed to transition into contenders.

The Ravenhill's, Brian Duignan and Ciaran Burke are all Durrow members who play their hurling with Ballinamere. It is in Ballinamere where they learnt their hurling and while football may be etched on the heart and soul of people in the Durrow area, a number of factors have played a role in the development of players from here as top class hurlers.

One of the main ones is down to chance. A couple of Offaly's greatest hurlers moved into the Durrow area over a couple of decades and brought an infectious passion for hurling with them. Goalkeeping folk hero Jim Troy and 1990s star Michael Duignan both live in the Durrow area – Duignan's son, Brian has emerged as a county player while Jim's son Mark Troy has played minor and U-21 hurling for Offaly in goals and looks set to follow his father's footsteps into the senior goals.

Pat Cleary, a goalscoring magnet as Offaly won the 1985 All-Ireland senior hurling title, lives in the Ballinamere area and they all gave great assistance to the locals, who have possessed a life long enthusiasm for hurling.

Ciaran Burke's family came in from Galway while the Ravenhill's grew up close to them all and they all fed off each other, they are all friends, one thing leading to another and the outcome as been a new, an unexpected hub, for Offaly hurling.

Stunning success followed at underage level. Ballinamere won U-16 hurling titles and then did what many traditional southern powerhouses struggle to do by winning back to back minor championships in 2016 and 2017 while U-21 was won in 2011 (as Ballinamere Gaels) and 2019.

Dan Ravenhill spoke last week about the impact those back to back minor titles had on him.

“The club minors a few years ago, we won two in a row. My brother (Ross), Brian Duignan, Ciaran Burke. Michael Duignan was over them. I was watching them lads and they pushed onto the senior tam. I was watching on the sideline and in the dressing room when they were going on. They inspired me.”

Having reached the U-14 Tony Forristal final three years ago, Offaly knew they had a talented bunch on their hands with the ability to make their mark at minor level this year.

Ravenhill admitted: “We knew the whole way up the ability that was in the group. Back training last December, Johnny Pilkington was talking about we want to win an All-Ireland. We knew we could. If we knew we would be in this position last December, we would have been laughing. We are delighted. We knew Offaly hurling wasn't in the top tier in a while but we knew what we could achieve. Hopefully we will do it.”

A transition year student in Tullamore's Colaiste Choilm, Ravenhill and Offaly have played in front of a near 20,000 crowd at the Leinster final win over Laois and a huge attendance at the All-Ireland semi-final against Clare.

He has savoured the experience.

“It was different all right. It was a serious buzz. We knew there was a massive crowd going. There was a savage roar in the crowd and looking up, you couldn't see any empty spaces. You couldn't believe what you were playing in front for a while and when the match starts, you kind of settle down, get into it and keep focusing on the game. You kind of forget about the crowd.”

Was it hard to play with that type of crowd watching?

“It's not that hard. It is not pressure. It is excitement really. You just want to go and make the county proud. To bring silverware to the county. It is great when you see an Offaly flag and flags everywhere. It is brilliant to see.”

The brilliant attacker is aware of Offaly's long spell in the doldrums but they are not burdened by it.

“We don't think about the past at all. We know the ability. Since U-14, we knew we could beat all these counties. We beat Waterford in the Tony Forristal semi-final. We beat Limerick. We have beaten all the strong counties back then so there is no reason we can't beat them at minor.”

He has seen Tipperary and knows what to expect.

“They are a good side. They showed great character there when they went down a point with a few minutes to go against Galway. They won't be easy beat.”

“Ah you do forget it. You have been playing hurling since you were eight years old. You have been playing matches since you were 8 years of age. You just go out and do the same thing. Try your best and all the work you have done pays off. I wouldn't mind any of that. I think it is normal to be nervous before a match. If you are not, there is something wrong. Not to be too nervous is the main thing. Just try and settle things down but you are obviously going to have the butterflies in your stomach going out in front of crowds like that.”