Gold for Dolan, bronze for Milner and Kennedy 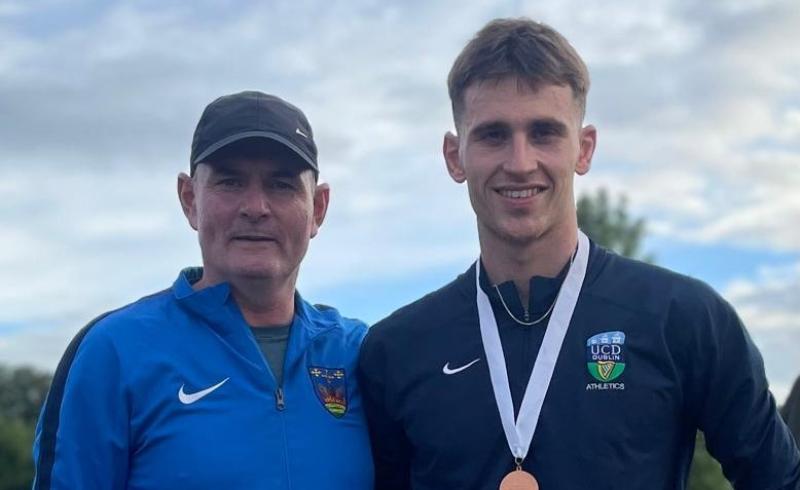 Mark Milner took a huge step forward with bronze in the national senior mens' 800m final. He is pictured here with Tullamore Harriers chairman Adrian Curley after the race.

THREE Offaly athletes were smiling after capturing much sought after medals at the National Senior Track and Field Championships in Santry this weekend.

She was a clear winner of the gold and her dominance is reflected by the fact that four of her throws were longer than the silver medalist, Laura McSweeney (Bandon AC), whose best was 6.71, and all six went further than the bronze winner, Roisin Howard, also Bandon, who had a best of 6.23.

(Pictured is Laura Dolan above after her national record)

Killeigh man Mark Milner performed brilliantly to take bronze in one of the championship's blue riband events, the senior mens' 800m on Sunday evening. He had qualified for the final from heat 3 in second place, posting a pedestian 1.58.52 and not running one bit faster than what was necessary to ensure one of the two automatic final spots.

Milner raced very well and turned the tables on Trim's Harry Purcell who had just finished ahead of him in the heat. Milner has broken 1.50 for 800 metres a few times and his best is 1.48.30, ran in Italy last year – he is in the shape to run sub 1.50 and has been training consistently well recently but the final was a tactical race and getting among the medals was his target.

Milner ran a brilliant tactical race here. He was content to settle in near the rear of the pack for the first lap as the race took a predictable shape with John Fitzsimons and Mark English leading it out – Fitzsimons carried the race to English before the Donegal man showed his immense quality by speeding clear inside the last 200 metres.

Milner quickly fought his way out of the bunch on the bell as Harry Purcell tried to keep pace with the two leaders. Purcell, a former 400 metre specialist who has now transitioned to the longer 800m, looked set for bronze but Milner was reading from a different script. As English and Fitzsimons burnt off Purcell with the winning post in sight, Milner got up onto his shoulder and then got past him inside the last 100 metres to take bronze by a few inches.

It was a huge achievement by Milner, an important step forward in his progression as one of Ireland's best 800 metre runners and it was his first medal to win at these championships.

Claire Kennedy also performed brilliantly to take the bronze in the discus. Her best throw was 37.09 with the winner Anna Gavigan of LSA reaching 46.22 and the silver medalist, Ciara Sheedy (Emerald AC) throwing 41.20.

Milner, Dolan and Kennedy were Offaly's only medal winners at the championships which were an important event for many athletes as August's European Championships looms into focus. 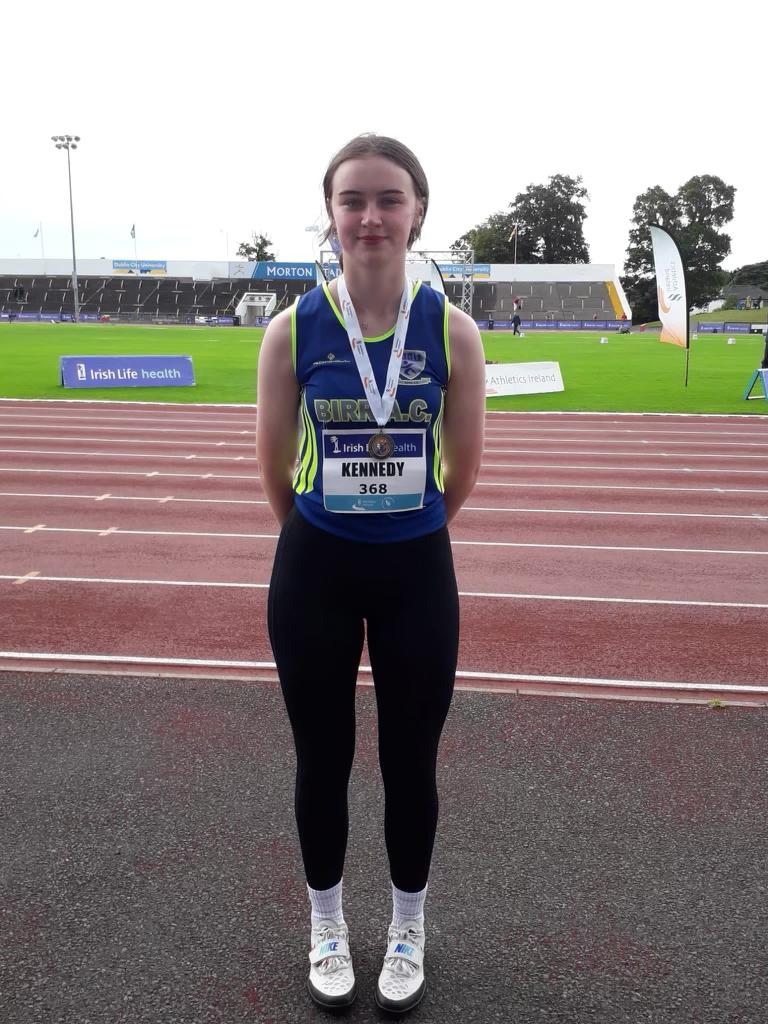 (Claire Kennedy with her bronze medal).

John Franks from Ballyskenagh AC finished 15th in the javelin with a best throw of 12.98 while Tullamore sisters Nadine and Danielle Donegan ran in the womens 5,000 metres final, finishing almost neck and neck with Danielle 11th in 17.24.28 and Nadine just three seconds back in 12th in 12.27.87. Nadine, on a scholarship in the USA, was running in the Tullamore Harriers' colours while Danielle is now racing for UCD. The race was won by the favourite Fionuala McCormack of Kilcoole AC in 16.07.75.