Gone to the dogs: Productive week for Offaly greyhounds 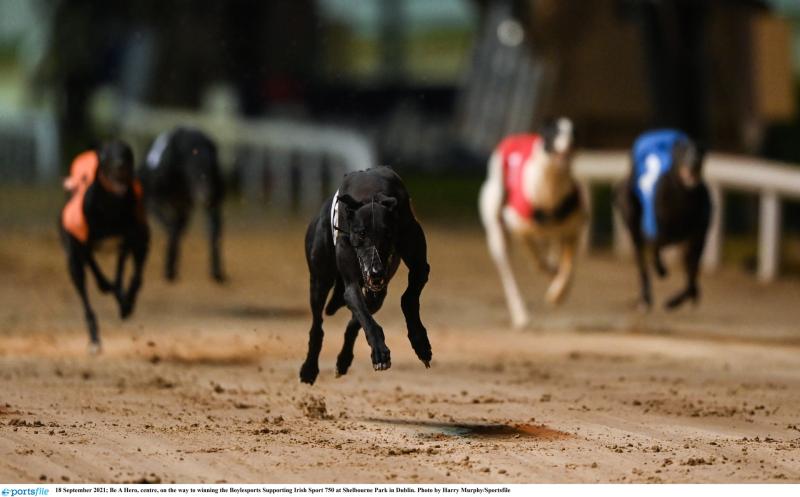 The final of the Irish Oaks was the highlight of a brilliant week’s racing on this side of the Irish Sea with the semi-finals of the English Derby dominating over in Towcester. A super final in Tralee plus loads more as well. Offaly dogs had another good week with plenty of winners.

Nothing of any significance early in the week with a few Offaly dogs getting into the prize money but none winning. No sweepstake finals of any consequence either.

Kilkenny hosted the semi-finals of the Mary Ramsbottom Memorial ON2 unraced stake, two good winners with only half a length between them on the clock. Bull Run Best won the first for James Quinlan in 29.37 (20 slow) by one length at a super price of 14/1 while Capitan Garfio was first over the line in the second for Kenneth Busteed in 29.40 (20 slow) by four lengths at 2/5 fav.

In Newbridge, in the final of the Track Supporters A2 sweepstake took place,  another shock here as 4/1 Payment Due (Ballymac Best - Kapalua Lady) won for Ray Melia in 28.63 by three lengths at 4/1 with €1.35k going to the winning connections. First Offaly winner of the week was in the semifinal of an A4 stake, Dark Design won for Rhode owner Sean Cocoman in 29.30 by one length at a well backed 6/4 fav.

Easily the most valuable final on Friday night was in Tralee, the Callaway Rambler @ Stud Race Of Champions 550 once again produced a top class field and winner as Bockos Budsit (Laughil Blake - Matts Monica) won by four lengths in 29.43 at 9/2 with Graham Holland training. The €15k first prize is easily his biggest win in his career so far expect to see him in Shelbourne next vying for the Irish Derby. Good Cody was second for Pat Guilfoyle and received a cheque for €4K.

In Shelbourne Park, in the final of an A3 575 yard stake, Paradise Nikibel (Magical Bale - Paradise Summer) made all to win by three lengths, at 4/1 in a fast 31.16, with the first prize pot going to Slane trainer Martin Lanney. In an A1 525 Famous Eight came from off the pace to win for Edenderry owner Thomas Glynn in 29.17 by one length at 3/1 with David Murray training.   Expect to see  this young dog over longer distances in the future.

Curraheen Park, Cork, first round of the Denis Linehan Solicitors ON1 unraced stake, won last year by Dromano Bucko for Mark O’Donovan. Just three heats with Kilcolgan Comet going fastest in 28.60 (10 fast) by three lengths at 5/4 fav with Nelius O’Connell at the helm. Some seriously well bred pups remaining in this stake and winning it will be an extremely difficult task.

Dundalk, first round of the Eamonn and Paddy Carroll Memorial A3 525, seven heats with the two fastest on equal winning times, Knight Tornado for Oliver Bray and Wilms Blake for Tim Caughey both stopping the clock at 28.73.  Limerick staged the semi-finals of the Martin Ryan Transport Treaty Cup open 350, hot favourite to land the stake Gizmo Cash won the first for Jamie McGee in 18.43 by three lengths at 1/2 fav. The second semi went to Seomra Nate in a slower 18.99 by three lengths at 3/1 with Chris Houlihan parading.

Four Offaly winners in Mullingar, in the first race on the card, an ON3 unraced, Castlehill Luke was first home for the Euro-Dollar Syndicate and Ballinagar owner Iggy Daly in 30.51 by four lengths at 6/4. In the semifinals of an A8 sweepstake, Lahinch Roxy won the first heat for Clara owner P.J. Cleary in 30.60 by two lengths at 4/5. In an A5 contest, Lingrawn Aoife won in 30.15 by a wide margin of eleven lengths at 2/1 for Moneygall owner Liam Jones. Our final winner was also our best as Wee Castle won a semifinal of an A1 stake in a fast 29.50 by six lengths at 4/7 fav for Edenderry trainer David Hanlon. All races were rated .60 slow.

A  fine crowd at Shelbourne Park for the final of the Sporting Press Online Edition Irish Oaks, the €25k first prize went to Rafa Mofo (Droopys Sydney - Clares Queen) who has certainly progressed since winning an A5 sweepstake in Shelbourne in early May. Her winning time of 28.14 is a super run and for her trainer Murt Leahy this is surely his biggest win so far and is so well deserved for the amount of hard work he does. Rafa won at odds of 3/1 by three lengths with Scooby Princess second for Jennifer O’Donnell getting a cheque for €7.2k. Droopys Nextone was third for John Linehan and got €3.5k.

Also in Shelbourne, we had the first round of the Shelbourne Champion open 550, won last year by Deadly Destroyer for Karol Ramsbottom.   Six brilliant heats with serious times in all, fastest of the six was Hoodoo Brown for Liam Dowling in 29.27 by eight lengths at 9/4 fav.

Four Irish dogs went into the semi-finals of the Star Sports and TRC English Derby at Towcester on Saturday and it turned out to be a brilliant night as all four made the final. We succeeded in winning the two heats also with Romeo Magico for Graham Holland and Kildare for Peter Cronin. The other two who qualified with ease are certainly in with a chance of winning are Priceless Jet and Hello Hammond, both for Paul Hennessy. The  Irish dogs are the top four favorites with the bookmakers to win this much sought after trophy with Magico and Kildare both 2/1, while Priceless Jet is 7/2 and Hammond 8/1. The two remaining English dogs are both 16/1 outsiders. It wouldn’t be a shock if we landed the first three spots home but in what order? Maybe Priceless Jet at 7/2 is where the value is as Paul Hennessy is no stranger to the winning podium on English final night. Should be a super night in Towcester on Saturday.

Three Offaly winners at the matinee meeting in Mullingar, in an A6 grade, Lingrawn Woody was first home, again for Liam Jones in 29.97 by eleven lengths at even money Fav. In an A4 contest Crackon Daisy had one length to spare for Geashill trainer Margaret Bolton in 29.88 at 11/2. Our final winner of the week was in an A6 race as Horseleap Misty won in 30.07 by one length at 9/1 for Sean McGuinness. Again all races were rated  .60 slow.

Friday, final of the Mary Ramsbottom memorial unraced in Kilkenny and final of the RCETS A4 stake in Newbridge.

Saturday, semi-finals of the Denis Linehan Solicitors unraced in Cork, second round of the Eamonn and Paddy Carroll Memorial A3 in Dundalk, quarterfinals of the Shelbourne Champion 550, final of the Treaty Cup in Limerick and of course the final of the English Derby in Towcester.

Famous Eight won an A1 in Shelbourne Park on Friday night for Edenderry owner Thomas Glynn in 29.17 and is a deserved winner this week.

Nine Offaly winners this week. Well done to all involved in any way.