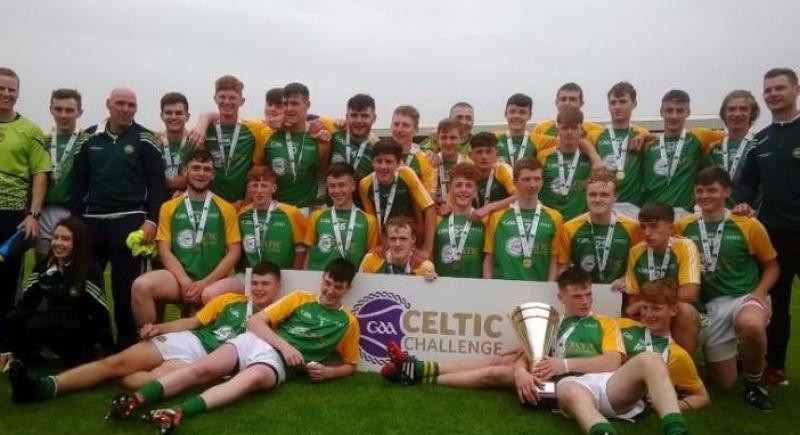 Aidan King, in front of the hurler fifth from right on back row, with the Offaly U-17 hurlers after a great win over South Kilkenny in the 2016 Celtic Challenge Division 1 final.

IT has been another magical week for Offaly GAA and it is profoundly sad that it co-incided with days of overwhelming grief and tragedy.

As Offaly won a sensational Leinster Minor Hurling Championship title in Portlaoise on Monday last, the air was tinged with sadness as people remembered a talented young hurler who had died suddenly just days earlier.

Aidan King, the Gables, Riverstown, Birr was a very good young hurler. In his early 20s, he had hurled at underage level for Offaly and CRC Gaels as well as U-21 for the Birr parish side of St Brendan's. A member of Carrig and Riverstown GAA Club, his tragic death has affected so many people – his family, community and friends were the most affected but it numbed everyone who heard about it.

A young man with his whole life in front of him, he was, by all accounts, a hugely popular individual with a personable, gentle and endearing manner.

He was talented on and off the hurling fields. A member of a faming family, he enjoyed helping his father Paul and uncles milking cows. He loved metalwork in school and often used his skills here to repair hurling helmets. He was an all round sports fan and enjoyed soccer and rugby while his love of hurling was obvious to all who knew him.

He stood out at every level he played in – in National School at Killeen, secondary school in Birr Community School and in third level at GMIT in Galway. He had been a regular on the Carrig and Riverstown intermediate hurling team in recent years – he was centre half back as they were pipped by Birr in a thrilling Intermediate Hurling Championship semi-final extra time shootout last year. He was in the St Brendan's defence as they lost to Ballinamere in the 2019 U-20 hurling final.

Rock steady and reliable in defence, no one could have envisaged that Carrig and Riverstown's IHC semi-final defeat last year would have been his last championship game for his club. He came up through the Offaly hurling development squad system, featuring on Offaly panels at various underage levels and he had a great passion for the game.

Many of the Offaly senior hurling team that defeated Kerry in the Joe McDonagh Cup on Saturday knew Aidan well and were very affected by his passing.

The Offaly team that won the Leinster Minor Hurling Championship in sensational style on Monday evening featured two of his Carrig and Riverstown club men in goalkeeper Liam Hoare and corner back Caelum Larkin. Both were outstanding with Hoare not putting a foot wrong in goals, showing great nerve on occasions as he came tearing out with the ball. Larkin was outstanding in front of him, making one sensational rob early in the second half to deny Laois danger man Jer Quinlan a goal – it was such a shame that Aidan was not there to witness it.

Instead, an emotional minute's silence was observed in his memory before the match. A match that showed the joy the sport can bring and the uplift it can give people.

It was a truly special evening, extraordinary in many ways. Offaly and Laois made the correct call by tossing for venue and playing it on a Monday evening rather than a Saturday afternoon in Kilkenny. Fair play to Offaly GAA chairman Michael Duignan and his fellow officers for instigating this and full marks to Laois GAA for their agreement and Leinster Council for facilitating it.

It created one of those magical evenings, the type that Offaly GAA supporters thought they would never see again just a couple of years ago but have now witnessed twice in two years as Leinster titles have been won in both codes, football and hurling.

There was a restricted attendance at last year's Leinster U-20 football final where Offaly ambushed a shellshocked Dublin in Portlaoise, though fortunately all supporters got a day out for the All-Ireland final win over Roscommon. There was nothing restricted about the attendance on Monday evening, however, as 12,500 supporters plus made the journey to O'Moore Park, resulting in traffic jams on the approach roads, lengthy queues outside and an inevitable ten minute delay to the starting time – all “first world” problems that many counties would like to experience and people really shouldn't be complaining at these type of inconveniences.

It has been an amazing two years for Offaly GAA as they have resurrected themselves from the doldrums in football and hurling at underage level. Those successes on their own don't mean anything. Senior success is far from inevitable and indeed, remains a long shot in both codes. As Offaly minor hurling manager Leo O'Connor said after Monday's final., “one swallow doesn't make a summer”. Senior hurling manager Michael Fennelly touched on this when interviewed last week as well, praising the minor hurling team but noting that an isolated pocket of outstanding talent won't change Offaly's stars and that they need to be producing these teams and players on a consistent, regular basis.

Yet the wins are hugely significant. They are successes that a lot of counties wouldn't enjoy and couldn't really dream about. It is the symptom of years of hard work as Offaly tried desperately to raise standards during a couple of decades of far more dark than bright days – from a GAA perspective and let's not forget that football and hurling is not a matter of life or death.

It gives great encouragement to the people at the coalface. The County Board working their socks off to raise the bar as high as possible, managers and mentors, those involved in the development squads system, schools and clubs. It is a collective effort and all have an important role to play. The club is the start of it all and if the right foundations are not in place there, their players will not emerge.

National and Secondary Schools are crucial and it is vital that Offaly GAA support their efforts. Success there can be such an important stepping stone for so many young players.

The development squads are the most important part of the jigsaw. It is where the elite players get the best coaching and guidance, where their skills and fitness develop to a higher level and they get the right guidance about what it takes to operate at the highest level – living the right lifestyle putting the right nutrition into bodies, training hard, recovering well and so much more.

It means that is an exciting time for Offaly football and hurling. There may be plenty of pitfalls ahead but once again it is possible to dream big. This minor hurling team was a breath of fresh air to the county – their work rate, honesty and skill levels was fantastic to witness.

The footage of the players, board officers and management singing the Offaly Rover in the dressing room afterwards was hugely emotional and touching. It was difficult not to shed a tear at it and the sight of one of Offaly's greatest hurling heroes, Johnny Pilkington, a selector, occupying a quiet corner in the dressing room and gently humming away to the anthem.

It was great that so many young people were there as clubs brought buses of school kids from all over Offaly to the final. The sight of thousands of young children on the pitch at half time, their complete excitement as Offaly won was a joy to behold. The exploits of these young minor hurlers and last year's U-20 footballers will inspire so many people coming behind them.

First and foremost, it will whet the players' own appetite for more of the same in the coming year but it will also help the people younger than them. Who wouldn't want to experience what these young men did on Monday, the excellence they achieved on the field, the joy they encountered once they won and the happiness they brought to so many people?

Sport can be such a healthy outlet for people – it brings joy and teaches life lessons in how to cope with adversity and defeat.

Aidan King's death, however, shows what can also happen young people. It is only one of a number of similar type deaths across Offaly in the past year plus and support for young people away from sport is so important.

It was good to hear that Carrig and Riverstown hurlers and St Cillian's senior camogie team gathered together in the local community hall to hear words of advice and support from Bernie Carrol l(Pieta Midlands), a Suicide Bereavement Liaison Office and from Josephine Rigney (HSE), Resource Officer for Suicide Prevention following Aidan's death.

And it was great that his memory was recalled and also celebrated on Monday evening and this week.