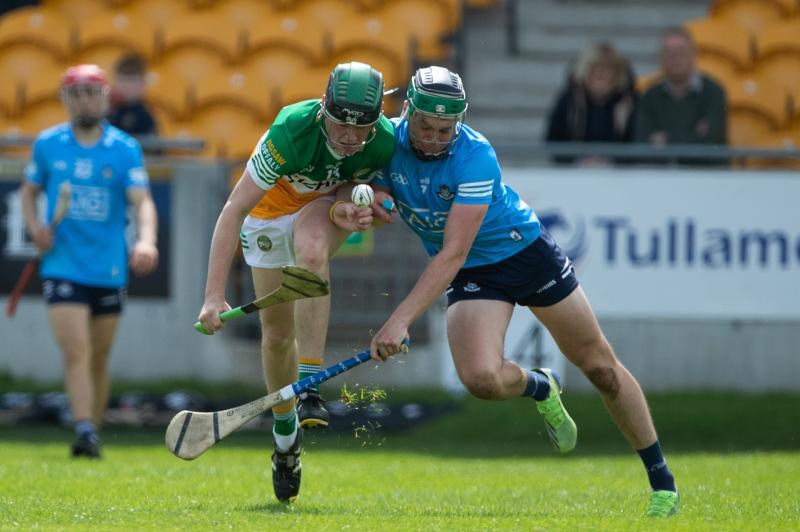 Cathal Robinson in action against Dublin.

A PAIRING that few anticipated at the start of the year has emerged in the Leinster Minor Hurling Championship final with Offaly and Laois preparing to do battle on Monday evening.

It is a novel, historic pairing, a first ever final between the two midland counties. It will create a real buzz of excitement next Monday evening in Portlaoise - the counties took the wise decision of tossing for venue.

The grade is now U-17 rather than U-18 but the pairing is a breath of fresh air to the province. Laois have shown their mettle by beating Kilkenny and Wexford while Offaly took out Dublin in the semi-final, having beaten the O'Moore county in the group stages.

With victories over Kilkenny and Wexford under their belt and their confidence soaring, Laois should be favourites, yet that mantle belongs to Offaly. They are slight favourites by virtue of their earlier win over Laois but this is as close to a 50/50 game as you can get.

It is a huge window of opportunity for both counties; a chance to win a minor hurling title and reap the benefits that this will yield in the future as these young players develop into adult ranks.

The pairing is also a tribute to the great work going on in Offaly and Laois in recent years. Laois have gone ahead of Offaly in the hurling world in the past decade – they have been better at senior level and have been making good, steady progress while Offaly dropped back to the third tier, the Christy Ring Cup before bouncing back to the Joe McDonagh Cup.

Laois have competed much better than Offaly against top tier counties in the past couple of years and have been in the Leinster Senior Hurling Championship since winning the second Joe McDonagh Cup in 2019.

Offaly, however, have been able to beat Laois underage teams and they will never fear their near neighbours. The historical backrground to this final will matter more to supporters than the young players who will play on Monday but they will be very aware of the vast interest in this final in both counties.

It will be Offaly's second Leinster minor hurling final in three years – they also reached the final in 2020, losing out to Kilkenny in a delayed championship that was only finished in 2021. Laois' last appearance in the final was in 2013 when they lost to Kilkenny. Offaly were also beaten in th 2003 final, again by Kilkenny while their golden era in minor hurling was in the 1980s when they won provincial and All-Ireland championships in 1986, 1987 and 1989.

Laois have also won four Leinster Minor Hurling Championships but their wins came far in the distant past, between 1934 and 1964.

Both counties are desperate for success and they are coming from quite similar places. Both have worked extremely hard at underage level in recent years, investing considerably in their development squad systems and expert coaches. Both are dual counties with very strong, traditional football areas.

There are differences in that Offaly have a much more recent tradition of winning at the top level. While their decline since the 2000s has been dramatic and severe, they won All-Ireland senior hurling titles in 1981, 1985, 1994 and 1998. The 1990s successes were backboned by that great minor run in the second half of the 1980s and members of those squads are now leading or playing a role in the efforts to bring Offaly back out of the doldrums.

Michael Duignan, a forward in the first All-Ireland minor in 1986, is now the County Board chairman and he is at the fulcrum of all the good things happening in Offaly at the moment. Johnny Pilkington, a star in the 1987 minor triumph and hero in the 1990s, is a selector and many others have done important work with development squads and at club level.

There is a great appetite in Offaly for success in both codes and the bar is being raised across both codes.

The performancs of this minor team gives tangible evidence that it is paying off. There has been hushed talk about their prospects for some time in Offaly and they have shown their potential by reaching the final.

The format of the championship suited both Offaly and Laois. They were in tier two along with Kildare and with all teams qualifying, there wasn't a whole lot at stake but it was invaluable in terms of providing games. Offaly came out with a 100% record. They hammered Kildare by 3-23 to 0-8 and were then pushed all the way by Laois before winning by 1-20 to 1-17. Laois destroyed Kildare by a similar margin, 4-23 to 0-10 and that shows how evenly matched the counties are.

Both have been in excellent form in the knockout stages. Laois' displays will turn more heads by virtue of their wins over Wexford and Kilkenny but Offaly have also been compelling.

Offaly pulled away for a very convincing 3-22 to 0-11 win over Antrim in their quarter-final while they were clear masters against Dublin after a slow start, winning impressively by 3-18 to 1-15.

It sets the scene for an intriguing final. Both counties have very skilful and fit teams and a decent level of physicality. They have a great work ethic and it really should be an epic tussle. It is likely to go right down to the wire.

Offaly have a very solid and hard working side. They also ooze some real quality and Laois will be particularly aware of the threat posed by Offaly's star forwards Dan Ravenhill and Adam Screeney. Ravenhill is a physically strong player with a great engine and the power to burst past players. He had a few wides against Dublin but is well capable of scoring from distance. His performance is pivotal to Offaly's prospects.

Adam Screeney looks to be a real star in the making and he will be earmarked for special attention by the Laois defence – he can expect to be double teamed. The Kilcormac-Killoughey man was assisted to the line in injury time last Saturday and Offaly will be hoping that his injury is not a serious one. He was clearly carrying a leg for a few minutes before going off and such injuries are not always straightforward. He is a different player than Ravenhill. He is smaller, slighter but he possesses pace and a breathtaking level of skill. His display last Saturday was a throwback to a young Brian Whelahan, Johnny Dooley and he is as exciting a prospect as has emerged on the Offaly scene in a long time.

He had a long road ahead of him of course and his physical development will dictate so much at senior level but that is not a concern at the moment. Any successful team needs good players all over the field with a huge work rate but they also need a few above average players, match winners who will punish teams up front. Ravenhill and Screeney are Offaly's two key players in this regard while James Mahon is also a tower of strength at full back. They have good players in every line, players bringing different attributes to the table and this Offaly side is creating a buzz that underage sides haven't supplied in a long time in the county.

Time will tell how good they are and this final will dictate a lot. They are entering the final in a different place than they might have expected. Offaly would have had the luxury of being underdogs against Kilkenny and in bonus territory. That is not the case now. Instead they are slight favourites and there is an air of optimism and expectancy that they can put silverware on the table.

It will take a really top class performance to do it and no one in Offaly is under any illusions about the challenge that Laois presents. They have shown their quality by beating Wexford and Kilkenny and Laois will have the same challenges – an air of expectancy and confidence among their own supporters that they can make history.

They too have their match winners up front in a deadly free taker, Ben Deegan and an exciting full forward., Jer Quinlan. They have character and strength all over the field and they won't fear Offaly.

It should make for a great evening's entertainment and Offaly do have the form and players to take their first title since 2000.