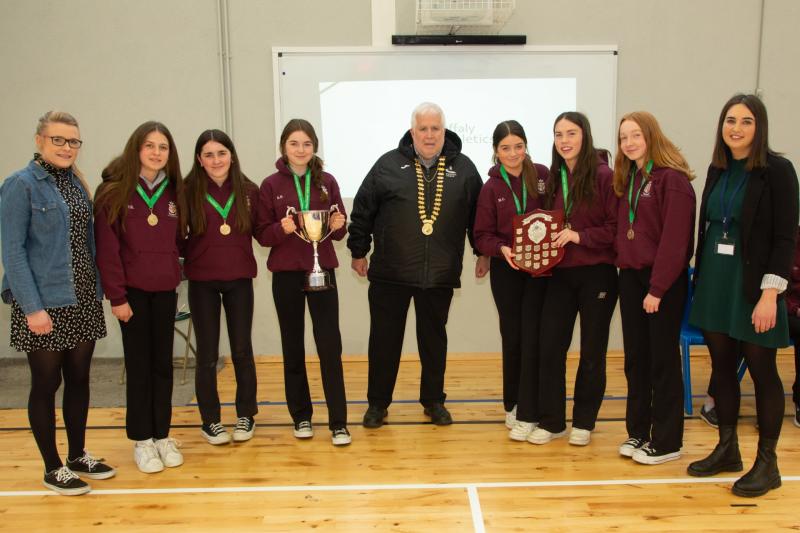 A GROUP of young runners from Tullamore Sacred Heart School will have one of the greatest experiences of their lives when they run in the World Schools' Cross Country Championships in Slovakia later in April.

They qualified for these prestigious championships after winning the Irish schools' cross country intermediate (U-17) team title a few weeks ago and will spend a week in Slovakia from April 21 to 28.

The championship race is on Sunday, April 24 and various other events have been organised, including a cultural day, a nations night and a friendship relay.

The top three scored on the day but it was a real team effort and these six will be joined on their squad by Tullamore girl Imelda Lambe in Slovakia – Imelda ran in senior at the Belfast event, finishing an excellent 12th. She was overage for intermediate but there is only one race at the Worlds and she will strengthen the Tullamore SHS team further.

Another student, Eabha Multaney-Kelly finished a superb third in the minor race. All of these students were given a great reception at a function to recognise their exploits in the school last week.

They are all members of Tullamore Harriers Athletics Club and juvenile coach, Tom Godley presented them with a cheque towards the cost of their trip. Tullamore Lions Club gave a very significant donation of €1,500 and president of Athletics Ireland, Tullamore man John Cronin was also present.

School principal and vice principal, Pauline McKenna and Orla Healy congratulated the students, noting that their exploits reflected well on everyone there. Pauline McKenna remarked: “For the girls to be able to achieve this level of excellence after Covid is phenomenal”.

Tom Godley told the gathering that their success didn't happen overnight and was the result of a lot of training and hard work. “They train in all kinds of weather, good and bad”, he stated, describing the horrible conditions they had to run in at Belfast/. He singled out Saoirse Murtagh for praise, stating that she fell in the junior race and had to pull out but picked herself up to run in the intermediate, where she was the team's second scorer. “It made a huge difference to us,” she smiled.

Mr Godley pointed out that the only previous winners from Offaly at the All-Ireland schools cross country was a Tullamore CBS team who won gold in 1964 while Kilcormac Vocational School took silver medals in 1989 – Eabha Multaney-Kelly had aunts on that Kilcormac team. He described it as a “true championship”, with no A, B or C grades and just the one race while it also covers all 32 counties with 800 secondary schools affiliated.

Mr John Cronin wished the team every success in Slovakia. They will be accompanied by teachers Ellen Godley and Aisling Burke in Slovakia.