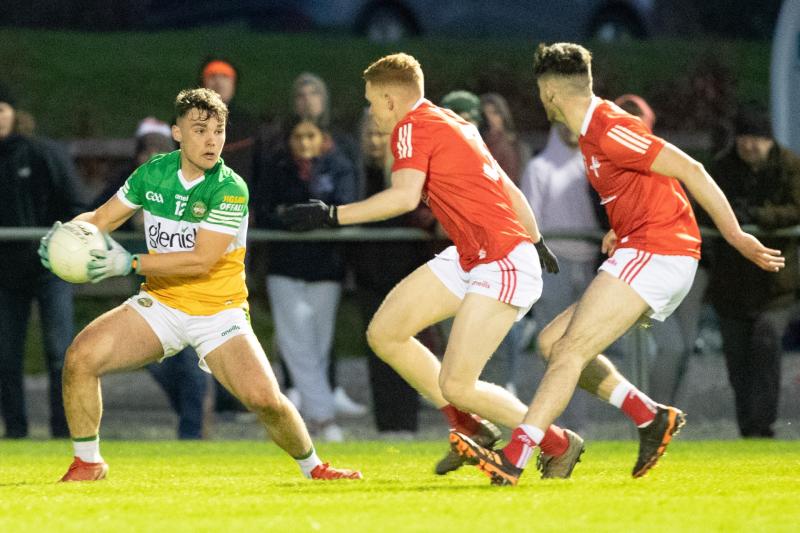 Marcas Dalton in action for Offaly against Louth.

IT is a big weekend for Offaly football and hurling with three county teams in action – the U-20 footballers and minor and senior hurlers.

First up is the U-20 footballers who have home venue for their Leinster quarter-final against Carlow in Faithful Fields, Kilcormac on Thursday evening.

The reigning All-Ireland champions had to work hard to get off to a winning start against Louth last Thursday evening. The visitors pushed them the whole way but Offaly were able to come good late on to edge home, 3-7 to 0-13. It was a close run thing, though, and manager Declan Kelly will be looking for improvement this week – he will also be aware that Offaly made a slow start last year in wins over Wexford and Westmeath before embarking on their sensational All-Ireland winning run.

Offaly received a massive blow before the Louth game with the news that star forward Cormac Egan is out for the campaign with a hamstring injury. The Tullamore flier has to get an operation on his hamstring in London and Declan Kelly confirmed afterwards that he won't play for Offaly U-20s this year.

Offaly will have learnt a lot from last week's game with a number of players making their debut at this level. They still have Sean O'Toole, Lee Pearson, Tom Hyland, John Furlong, Fionn Dempsey, Cormac Delaney and Keith O'Neill who played in last year's All-Ireland run and Offaly will be hard beaten. They will be wary of the challenge presented by Carlow but Offaly are favourites to advance.

The minor and senior hurlers are out on Saturday. Most attention will be focussed on the senior hurlers who travel to Belfast to take on Antrim in the Joe McDonagh Cup opener. Offaly gave a disappointing display when losing to Antrim in the National Hurling League relegation play off a few weeks ago and will be determined to restore their pride. They have a tough Joe McDonagh Cup campaign as they play Meath, Down, Kerry and Carlow in the space of a few weeks.

Offaly will be aiming to continue their encouraging start to the Leinster Minor Hurling Championship when they welcome Laois to Tullamore on Saturday. Offaly are in tier two with Kildare and Laois and with all three counties staying in the championship, this stage is all about games and sharpening up – the tier two top team go into the quarter-finals with the other two in the preliminary quarter-finals.

Laois will tell Offaly a lot more about where they are. Both had easy wins over Kildare in their first game and Saturday's meeting is an important one. Offaly have a promising young side and they are slight favourites to win.