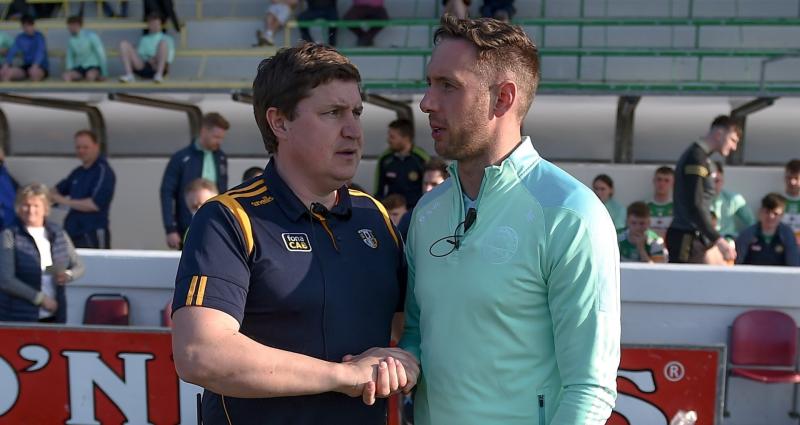 UNDER no illusions about the challenge that Antrim in particular will present, Offaly senior hurling manager, Michael Fennelly still has his sights set on winning the Joe McDonagh Cup and promotion back to the Leinster Senior Hurling Championship.

Offaly travel to Belfast's Corrigan Park on Saturday for the first of five group games, with the top two reaching the final.

While Offaly were well beaten by Antrim in the National Hurling League Division 1 relegation play off a few weeks ago, Fennelly wants them to win the McDonagh Cup. “That is still the target. There is silverware there and that is what we are aiming for.”

Antrim will be the favourites and the Kilkenny man anticipates plenty of other tough opposition on the way.

“Carlow and Kerry were not at their best last year and they have regrouped. It is a very competitive competition. Antrim are hot favourites and have a good bit to spare on most teams but you never know.”

Fennelly was given an indication of the strength of Antrim when they beat Offaly by 2-24 to 2-17 in that relegation play off in Navan. His target on Saturday is a much improved, more cohesive performance and see where that takes them.

“Ideally we would have liked one or two others before we play Antrim. Antrim are clear favourites, others are very competitive and had very competitive Division 2A league campaigns. It is not a must win and they beat us comprehensively the last day. I was disappointed with our own performance, they were well on top in all positions and we were beaten fair and square. We are looking for a strong performance, more than anything and see where we end up then.”

Were you surprised at how much better Antrim were than Offaly that day?

“Antrim were very good to be fair. They won a lot of individual battles but they scored 1-2 just before the break at a crucial time. They went five points up but we got it back to a draw seven, eight minutes into the second half. They got their tails up again and punished us. They were worthy winners and even more so than the final score indicates. It was more like a 10-11 point deficit, looking at it from an unbiased perspective.”

He spoke about Antrim having a better league campaign that Offaly as they ran Kilkenny, Waterford and Dublin close.

“They were bringing them down to the wire and putting up good scorelines. They performed much better than us in our group. We are trying to get our performance right and not concede as much.”

Fennelly was glad to receive that lesson then and not in the championship. “It was an eye opener more than anything but I would prefer to get it back then than now. The last thing you want is to be covering holes with plasters that will not hold. It was a reality check but better to get it early than later. It is championship now, it is a new competition, we have shaken off that disappointment and are genuinely looking forward to it.

“It is a massive task in Corrigan Park. They beat Clare there, drew with Wexford there. They were close to Dublin and Waterford. Those are the games you look forward to. We hope to be very competitive and to be there or thereabouts.”

Offaly have a tough schedule with three away games and long trips to Belfast, Newry and Tralee. The Antrim and Kerry games will have overnight stays and Fennelly remarked that they have not had much luck with their schedule this year as they also had three out of five away in the league.

They have no serious new injuries and some of their existing ones are on the mend. Forward Luke O'Connor has an injury that means he is unlikely to last seventy minutes while Shane Dooley, Cathal Kiely, Ross Ravenhill, Aaron Maher, Conor Langton and Conor Molloy are all recovering well, though the manager does not expect them to be involved this week. Oisin Kelly is also leaving no stone unturned as he rehabs from a cruciate operation – Fennelly is not fully ruling out involvement from the Belmont man at the end of the competition but said they are taking it day by day and that it would be a huge ask to throw him in.