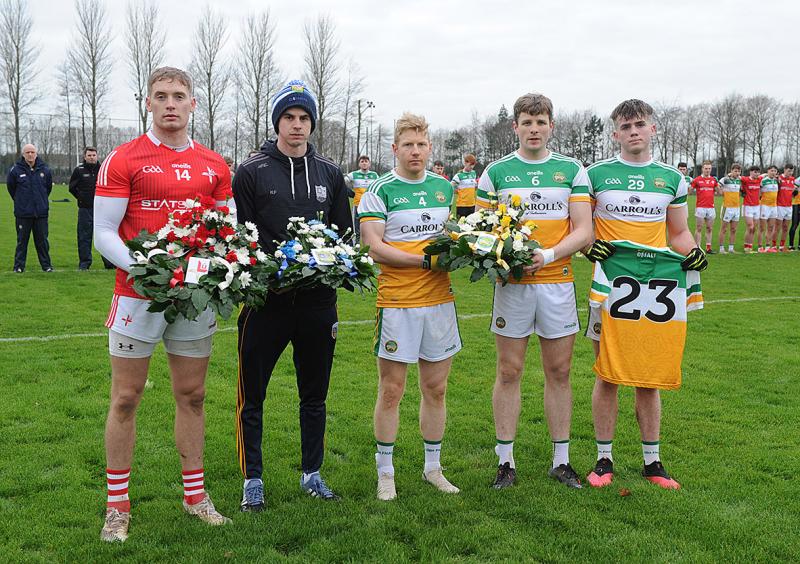 Offaly finished the day on a winning note with a win over Louth on a day when a number of poignant tributes were paid to Ashling Murphy.

The players stood arm in arm for a minute's silence before the game with wreaths laid in memory of the Offaly schoolteacher who was murdered earlier this week. Neither team used the number 23 jersey on the day and the game was stopped after 23 minutes as a mark of respect.

Offaly were in control for much of the game but Louth scored a goal with 59 minutes on the clock to level the scores but an explosive cameo from Rory McNamee put Offaly back in front with the Rhode man hitting three late points along with one from sub goalkeeper Ian Duffy to seal the win.

In what could be a first for the GAA, both Offaly's goalkeepers on the day, Paddy Dunican and Duffy, got their names on the scoresheet.

Niall McNamee opened the scoring with a point and this was quickly backed up with a 45 from Paddy Dunnigan to double their lead.

Louth got off the mark on 10 minutes as Ryan Burns rose highest to win a mark near the goals and he duly tapped it over.

The sides traded scores through Ciaran Byrne and McNamee, however as the game progressed Offaly were looking that bit sharper. A mix of good solo runs and an accurate kicking game forcing Louth into numerous fouls. By the water break the visitors led by 0-4 to 0-2.

The game went into a lull in the second quarter, yet there were still three more scores, two points from McNamee cancelled out by a free from Ryan Burns. At the break Offaly led by 0-6 to 0-4.

Jack Darcy extended the lead for Offaly at the start of the second half but Louth responded with a goal for Leonard Grey on 40 minutes to level the game.

Offaly bounced back well, notching three in row courtesy of Bernard Allen (2) and Dylan Hyland to take a 0-10 to 1-5 lead into the final water break.

Louth struck for a second goal on 59 minutes to once again level the game  but the late scores from Ruairi McNamee and Ian Duffy secured the win for Offaly.