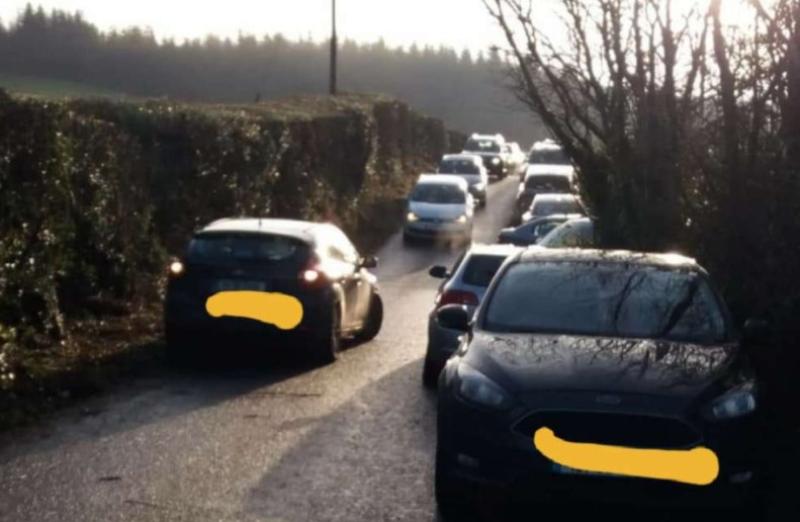 Some of the cars causing obstruction on the road leading to Glenbarrow carpark over the Christmas period.

"Chaos" was one word used to describe a situation at a popular beauty spot in the Slieve Bloom Mountains over the Christmas period.

Glenbarrow in the Slieve Blooms has been very popular with families and walkers for a number of decades but its popularity absolutely exploded during the Pandemic.

During Level 5 Lockdown the authorities blocked the road to the carpark with massive concrete blocks to deter people from visiting.

The concrete blocks are long gone and for several months there's been a steady stream of families and walkers to the area. Over the Christmas period this steady stream became a flood, resulting in lane and road congestion due to motorists parking their cars in non-designated parking areas and blocking cross-roads.

The cars prevented residents from being able to exit their driveways, with the local residents' Facebook page voicing concerns about the "chaos" over the festive season.

Local resident Tom Joyce said the blocked lanes are resulting in the restriction of access for the emergency services. "We had a couple of incidents," he said, "where walkers suffered a sprained ankle and a broken wrist. They needed evacuating but the wide-bodied emergency vehicle was unable to come down the lane."

It's not the first time that local residents have raised concerns about parking issues at the popular beauty spot. In July an elderly lady fell and injured herself, but the ambulance was unable to reach her.

Residents want to see an expansion of the parking currently available.

Tom Joyce said last July he rang the Guards because of a car which was blocking his lane which meant he couldn't leave his house. "The Guards said they'd get a recovery truck to remove the car to Portlaoise, but it turned out that they couldn't get the recovery truck in."