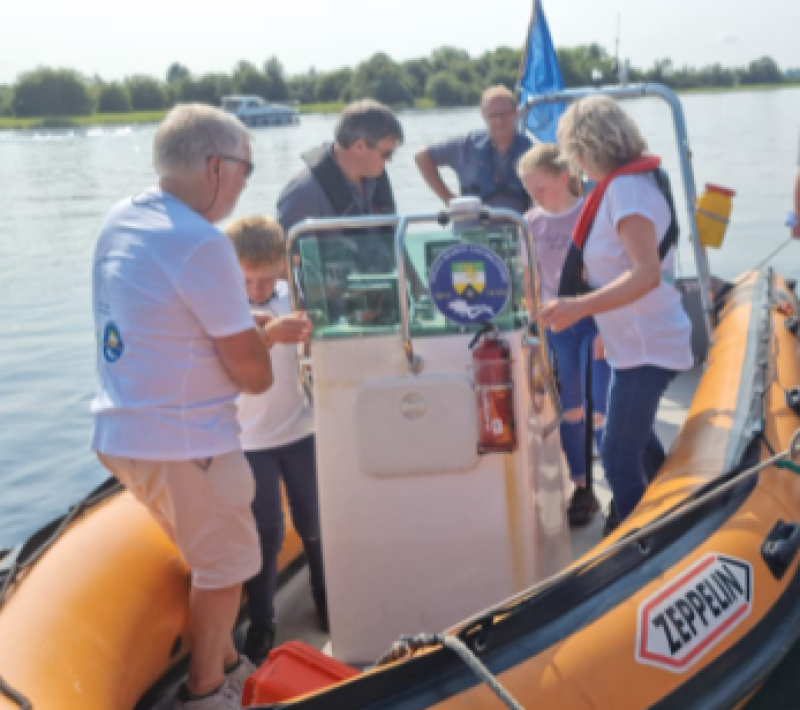 The Biffochallenge team assisted by Martins grandchildren unveiling the name of the OS&R rib, which is now known as Marty

THE Biffochallenge launched on March 1 last year has been an outstanding success exceeding the original target of €24,000 by a massive €10,416.

Organising committee member John Wallace stated that the Biffochallenge team were overwhelmed by the huge support from so many people in the locality and beyond who made contributions big and small thus ensuring that the original target was exceeded by such a large amount.

With donations coming from as far away as Australia, Canada, USA, France, UK, and every county in Ireland it was truly humbling to see the support that made this fundraiser so successful.

John, Tony, Delores and Trish wish to thank everyone who contributed to this enormous fundraiser. In particular the help and support of so many family members and friends was unbelievable.

In October 2019 the team had originally committed to raise €20,000 for the newly formed Offaly Search and Recovery group.

Following the accidental drowning of their brother Martin the Wallace family and Martin’s partner Trish decided to assist the Offaly Search and Recovery group to raise money to purchase a rib. Having endured the loss of a loved one through a water tragedy they decided to support this new charity. While they did not require the services of such a group, they felt very strong on the idea of been able to assist families who are less fortunate when a love one is lost through water-based tragedy.

In early 2021 the group decided to support another worthy local charity and raise €24,000, €12,000 to deliver on the original promise to Offaly Search and Recovery and €12,000 to the new charity partner. Having considered a number of local Offaly charities it was decided to choose Offaly Hospice. Taking on Offaly Hospice fitted with the group's ethos of supporting an Offaly charity that provided family support to families in time of great need.

On March 1 2021 after losing a full year on the fundraising trail following a number of virtual meetings The Biffochallenge was born and launched. Supporting the two charity partners the Biffochallenge team could not believe how quickly the idea took off even with Covid restrictions in place. The number of challenges and the vast number of venues were unbelievable and the money started to roll in. When things slowed down a bit the team got back to the drawing board. This is when the Caman agus Puc challenge was launched and it was designed to bring the fundraising to a close. However the week before the Caman agus Puc Challenge was due to take place the original goal of €24,000 was achieved. Following a super day in St Brendan’s Park Birr on July 11 the Biffochallenge had exceeded its target by more than €10,000.

The Biffochallenge team are overwhelmed at the response and support they received from family, friends, the many Offaly people from within the county and further afield and the people from many other counties with no Offaly connections. A special word of thanks goes to so many of Martin's friends who came on board to make the Biffochallenge such a success. John, Tony, Delores and Trish are delighted with the goals and achievements which were attained by the Biffochallenge. It is unbelievable how much good can come out of a tragedy which can rock a family to its core when a family member dies suddenly in tragic circumstance.

The team are very proud of the many goals achieved in Martin’s memory some of which were not part of the original plan when the fundraising started in October 2019.

The original target of €24,000 was far exceeded with the Offaly Search and Recovery group receiving in excess of €25,000 in total between the proceeds from the show run by Guy and Kode and the Biffochallenge.

The Offaly Hospice building fund received €12,000. The overall total between all the fundraising was just over €42,000 wich was a huge success by any standards.

The Offaly Search and Recovery team purchased the rib which will secure their operation well into the future as an efficient fast response unit. It will ensure that they will be in a position to keep their training updated along with the ability to respond to water-based tragedies in the quickest time possible.

The Caman Agus Puc competition will become an annual fundraiser for The Offaly Search and Recovery team. The aim is that it will become part of the Offaly GAA calendar with club participation. The date set for the 2022 final is Sunday July 10. This will be a real bonus and provide an annual income which will become the corner stone in their annual financial requirements.

The Biffochallenge team and the Wallace, Clear and Condron families are so proud that the memory of Martin Wallace lives on in such a vibrant manner in the form of the 200HP Zeppelin RIB which is named in his memory. This rib provides the very best form of safe water transport on the river or lake where ever it is required. This craft will help the Offaly Search and recovery team deliver a timely safe service in Offaly and surrounding counties for many years.

The end is never the end it is just a new beginning and the John, Tony, Delores and Trish wish to thank everyone who helped make the Biffochallenge such a success which has helped many new beginnings along the way. John says the Biffochallenge team feel that they provide the opportunity for people to do something good, something with a challenge and something that was enjoyable during covid lockdown at times. They hope that people realise how much their contributions have made a difference in the Offaly area during such difficult times.