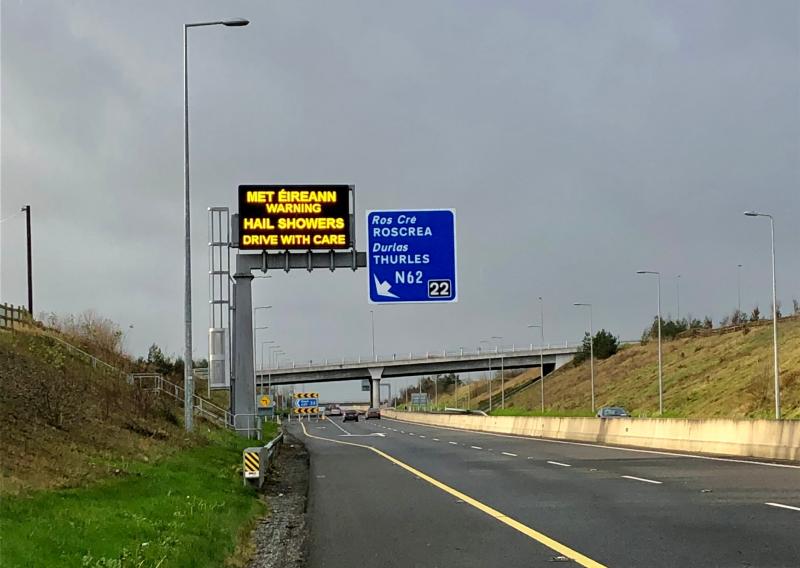 The M7 is known for being dangerous in inclement weather - photo: D. Keegan

Many motorists who frequently use the M7 motorway might not be aware that the new time-based speed detection cameras installed last year are still not functional.

The camera system, which although not yet operational, has already had a major impact on speeding on the busy motorway and Gardaí want the system to move into it's next phase of active service.

The system, which is in place south of Nenagh between junctions 26 and 27, was installed in March 2021 and remains in the testing phase and facing delays.

Chief Superintendent of the Tipperary Garda Division, Derek Smart, wants the system to go live as soon as possible and told a meeting of the Joint Policing Committee it's already yielding results.

“That system is still in the testing phase - but I have been speaking with our national officer of road policing with regard to getting that system into service”, the Chief Super explained.

“A lot of people don't realise that what we have there at the moment between those two yellow concourses is still testing. That needs to come live as soon as possible, because at the start when that system went in it showed people were responding and slowing down on the particular stretch of road we were aiming to try and get people to slow down on - particularly when there is inclement weather”, Chief Superintendent Smart said.

The system is designed to detect motorists who break the speed limit but avoid getting caught by slowing down as they pass single-point speed cameras. Transport Infrastructure Ireland (TII) and Gardaí jointly announced the system for part of the M7 in March 2021.

The section of the M7 between junctions 26 and 27 is a known speeding blackspot according to the Garda and road authorities.

TII said the delay in passing the testing phase is the need to calibrate and provide certification for the accuracy of the system.
Because the camera system is not yet authorised the possibility of a legal challenge to any evidence they capture is open to challenge in court.

TII said this week they expect the first prosecutions arising from the average speed detection system would begin to be seen in the first quarter of 2022. In 2020, there were a total of 357 speeding detection made in the vicinity of Junction 26 and Junction 27, which is a known speeding blackspot.

TII said speeding on the motorway is very reckless, particularly during heavy rain or hail showers, which increase the potential of serious accidents. Junction 26 to 27 are in an area noted for sudden and severe showers of hail. TII said it had analysed speed data on the M7 corridor since 2017 and identified speeding as a significant issue with some 40 per cent of drivers exceeding the 120km/h speed limit on certain sections.