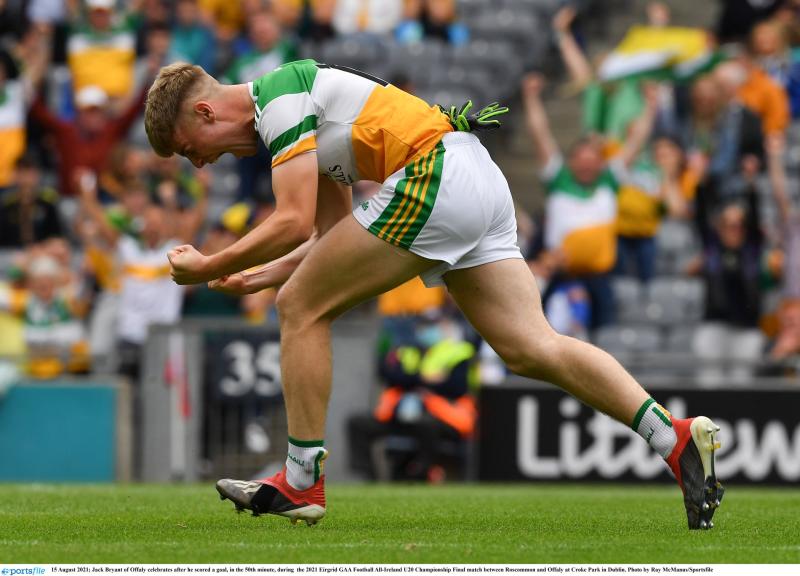 Jack Bryant, one of 11 of the 2021 Offaly U-20 footballers on John Maughan's senior panel.

OFFALY senior footballers will witness a changing of the guard in 2022 with a number of long standing regulars ruled out while 11 members of the 2021 All-Ireland U-20 Football Championship winning side are currently part of the squad.

Offaly begin their 2022 season with an O'Byrne Cup game against Dublin in Tullamore this Saturday, followed by a home game against Longford next Wednesday evening and then a trip to Ardee to face Louth that Saturday.

Eoin Rigney (Rhode) and Cian Farrell (Edenderry) are likely to be out for the inter-county season having got cruciate operations last November. “It is not looking like either will play for us this season,” manager John Maughan revealed this week, stating that there is normally a six to eight month recovery period from an ACL operation – Offaly play Wexford in the first round of the Leinster Senior Football Championship at the end of April.

Peter Cunningham is on an Army Tour of Duty in Syria and while he is due back in Ireland in April, Maughan expects that this will be too late for him to feature for them.

“Peter knows from his last tour and I know from experience myself that it can't be done,” Maughan confessed. He talked about Rigney's and Farrell's injuries. “It is very unfortunate. They are two young men who would be on the team but it is what it is.”

Long serving midfielder Eoin Carroll has taken a year out to tour Australia, while Shane Horan has also opted out – the son of a Ballycumber father and Kilcormac mother, Kilmacud Crokes man Horan declared for Offaly under the parentage rule and impressed with his work rate and honesty on the half forward line.

Rigney, Carroll, Cunningham and Farrell would expect to be starters if fully fit and it means that there will be significant changes to the Offaly team this year. The blow, however, has been cushioned by the naming of 11 of the U-20 side that brightened up the football world with the quality and pace of their football as they took All-Ireland honours in 2021.

Jack Bryant (Shamrocks), Cathal Donoghue (Kilcormac-Killoughey) and Rory Egan (Edenderry) were on the panel last year, though they didn't play as they were kept available for the U-20s. They have been joined this year by Sean O'Toole (Shamrocks), Aaron Brazil (Shannonbridge), Lee Pearson (Edenderry), Kieran Dolan (Shamrocks), Morgan Tynan (Ballinagar), Cathal Flynn (Ferbane), Cormac Egan and John Furlong (both Tullamore).

Clonbullogue's Keith O'Neill will be added but is tied up with his club at the moment as they are preparing for the Leinster Club Junior Football Championship final.

Tullamore's Luke Egan is also on the panel – Egan impressed as Tullamore won the Senior Football Championship in 2021 and he would have been on the Offaly U-20 football panel only for opting for the county U-20 hurling squad when manager Declan Kelly made it clear he would not facilitate dual players.

Other newcomers to the panel include Raheen's Dylan Hyland, Durrow's Gerry Spollen, Shannonbridge's Jack Darcy and Tullamore's Diarmuid Egan (a brother of U-20 star Cormac). Rhode's Conor McNamee has also been brought back after being off it last year.

Some of the newcomers are carrying injuries with McNamee, Spollen and John Furlong all missing training over the Christmas period. Cormac Egan and Cathal Flynn were also carrying injuries but both trained last weekend, with Egan on the way back from a bad hamstring injury that ruled him out of most of Tullamore's triumphant campaign.

“You never know. It depends on how they appear in training and if they are up to the strain of intercounty football, if they are strong enough to play. On the evidence of what we have seen, albeit with some of them not able to train fully, some do appear to be ready to step into senior intercounty football. We will not be exposing players who are not physically ready. We were very conscious of that last year and none of the three (Bryant, Donoghue and Rory Egan) were togged out for the championship. I have a very good working relationship with Declan Kelly. We engage regularly and all will be discussed with him. There is an open line of communication between us. Last year, we didn't jeopardise any of their chances and whatever decisions are made will be done in the best interest of the players and Offaly football.”

He is very much aware that some newcomers will take time to adapt to the training for senior county football and he includes Luke Egan as one of those players. “Strength wise, he has a bit of building up to do. He is a very talented footballer and has a bit of developing to do but he has a senior county future.”

Defender David Dempsey has a foot injury at the moment and will be seeing a specialist this week while Tullamore's Declan Hogan is also dealing with injury. Covid has also reared its ugly head with eight players unable to train at the weekend because of either having it or being close contacts. “It is a fluid situation and you never know what you are going to be hit with,” the Mayo man admitted.

He has been delighted to have so much outstanding young talent to come on board. “It makes a huge difference. They bring great energy and confidence around the squad. Some are well able for it and have great confidence. They are quick and pacey as well. I am very hopeful for the future. It is a great opportunity for them to step up. It will be down to their personal determination and desire. I hope they don't become sullied or head off on a different tangent. I don't think they will. They have bought in really well to what we are doing.”

Maughan believes that the experience will serve all these players well, even if they don't play much this year for him. “Rory Egan, Cathal Donoghue and Jack Bryant had no game time with us last year but Jack was the U-20 player of the year, Cathal was man of the match in the All-Ireland final and Rory improved incrementally the whole way through. They all benefitted enormously from being exposed to the senior county setup. These guys are young, they will learn and they will get stronger and better.”

His back room team is the same apart from the addition of Kerry legend Tomas O'Se as coach. “It is great to have someone of that pedigree and winning experience getting involved. I am delighted. He is very enthusiastic, he is a decent guy and he has no agenda. He was there yesterday morning an hour before training, chatting lads individually. He is in 100% and will be there for every training session.”

He will take each game in the O'Byrne Cup as it comes and doesn't expect to be able to finalise teams until the day of each game. “We have eight down with Covid at the moment. Some might be back but we don't know what will be thrown at us. It is very difficult at the moment and we won't know until the last minute. The second game against Longford is on the Wednesday and we will have thirteen lads playing Sigerson Cup that day.”