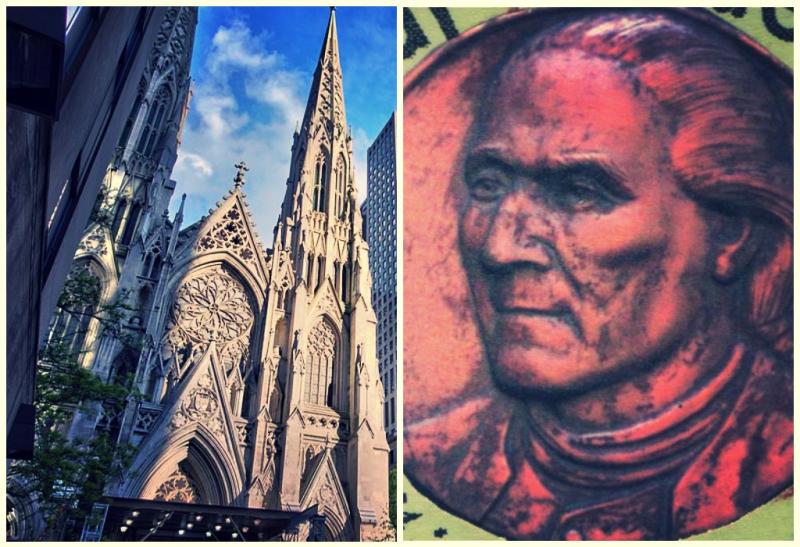 Born in the then named King’s County in 1754, Cornelius Heeney’s life took a momentous turn from the day he left Ireland for America some thirty years later.

Not much is known about his early life, but historian Dr Ciaran Reilly shared some of the information he found while researching Heeney: “The family definitely lived locally. There was a dispute about whether he was from Edenderry or Rhode, but my theory is that he was an Edenderry man."

However, Cornelius Heeney’s headstone does not stand in his native Offaly, but rather is located 3,000 miles away from Ballymacwilliam in Brooklyn, New York. It was in New York where this man’s life made its greatest impact on the human experience of the people who benefited from his charitable work and donations.

Ciaran Reilly claims that “his story is truly remarkable,” but he was not always in a position to be so generous, and this incredible tale began in Edenderry in the mid-1700s.

“As a young boy he actually worked as an apprentice for a brewer called Robert Fullard at the White Heart Inn on JKL Street in Edenderry. The brewery was located opposite where Brady’s shop stands in the town today,” Ciaran Reilly stated. Not much is known about Cornelius Heeney’s family but they do not appear on valuation lists or property listings relating to the town from that period, and so don’t appear to have been property owners, something Ciaran Reilly says suggests “his family were not that well off.”

However, Heeney’s business acumen was evident before he left Ireland and he had received a mercantile education in the business house of a friend in Dublin. This ability would stand to him when he finally arrived on American soil in 1784.

The 30-year-old sailed for Philadelphia, but the ship he was travelling on hit trouble in the Delaware River, and the experience that followed may well have influenced his enduring charitable nature later in life.

It is said that the ship was struck by lightning and Heeney ended up in the water. Oystermen were fishing nearby and they rescued Heeney and his fellow passengers. Once ashore, they tried to charge the passengers a dollar each for the rescue, but Heeney was penniless and could not afford the fee. A Quaker standing at the shore side gave him the dollar and said, “Whenever thou seest a fellow creature in want of a dollar as thou art now, give it to him, and thou shalt have repaid me.”

It is fitting that this became the mantra by which the quiet Offaly man would live out his days in America.

Heeney subsequently associated himself with the Quaker population in Philadelphia and worked there for a number of months, but he was soon on his way again, this time to New York. There he met another Quaker called William Backhaus, an Englishman running a successful fur business. He employed Cornelius Heeney, and while working for Backhaus, Heeney met a German called John Jacob Aster. Heeney was employed as a bookkeeper and accountant, while Aster was working as a porter and salesman in the Backhaus store.

The pair became firm friends and for a short time, they even formed a partnership, running the Backhaus business after William Backhaus retired and returned to England in 1797. After dissolving this partnership, Heeney continued to work in the fur industry, showing his early business zeal to good effect by becoming hugely successful.

The extent of his wealth was monumental, but Heeney was a shrewd and cautious man, and did not invest in a lavish lifestyle. “Information about his personal life is scarce, other than the fact he was a bachelor with no children. He just seemed to continue to give his money away to charitable causes as he earned it,” Dr Ciaran Reilly revealed.

Heeney lived at Water Street in the city, and was a revered Catholic in New York at the time, where many of his charitable donations involved the church. In Manhattan, he gave a gift of $18,000, a colossal amount at the time, to build the Prince Street Orphan Asylum. Also, in the 1780s, he donated money and helped organise the congregation of St. Peter’s Church. Heeney was a patron of this church for many years and was a trustee and treasurer, helping to fund many upgrade works on the building.

He owned vast amounts of land around the modern day Fifth Avenue area of New York, a very lucrative address. Rather than make commercial gains from the land, he gifted a portion of it to the building of St. Patrick’s Cathedral, one of the most recognisable Catholic cathedrals in the world. After that, he built the free parish school for girls, and made numerous gifts of money and property to St. Peter's and St. Patrick's, amounting to about $60,000, a truly staggering amount of money in the 1800s.

However, perhaps his greatest achievement in life was the Brooklyn Benevolent Society, a charitable organisation he founded in 1845 to help the poor of New York, most notably orphans and widows. At the first meeting of the society, Heeney explained that his vision for the charity was mainly that his “fellow Catholic countrymen and their families should be relieved from
want, many of them on their arrival here being in absolute need of assistance.”

Cornelius Heeney was also involved in politics, and was in fact the first Catholic to hold public office in New York, serving five terms in the State Assembly from 1818-1822. He also served as one of the first Catholics on the New York legislature. He campaigned for the rights of the poor, and also as a patriotic Irishman, joined with Thomas Addis Emmet and the other exiles of the 1798 rebellion to defeat the effort of Rufus King to be chosen United States Senator for New York. King was an English minister who had tried to keep Emmet and his fellow exiles of 1798 as political prisoners longer than their set terms.

In 1835, Heeney’s home at Water Street was destroyed by a fire when 648 homes and business premises were engulfed. He did not rebuild the home and instead moved to a farm overlooking the East River in Brooklyn. Here, Heeney lived quietly and at the time of his death in 1848 at the age of 94, was alone without a family, but instead was considered a true friend of many, especially the people his charity had helped in New York. In fact, in his will, he left every penny of his vast fortune to the Brooklyn Benevolent Society, the organisation he had founded just three years earlier.

Heeney’s legacy is lasting in New York, and the Brooklyn Benevolent Society is still in operation to this day, primarily helping underprivileged children get an education to further their lives. “I think it is incredible that 170 years after his death, people are still benefitting from his wealth and his generosity in distributing that wealth,” Ciaran Reilly remarked.