Faithful teams on the hunt for Leinster and All-Ireland glory 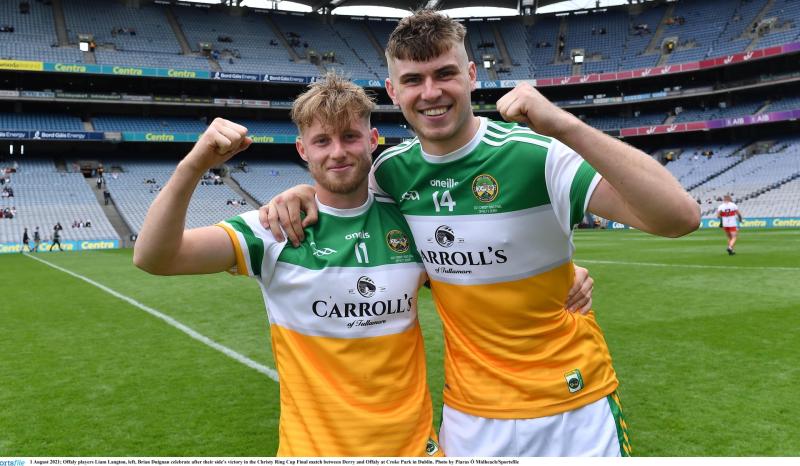 THE fixtures for the National Football and Hurling Leagues and intercounty championships have been announced for next year. Offaly have tough campaigns ahead in Division 1 Hurling and Division 2 Football after both sides won promotion last year.

Both will face an intensive schedule of games from the end of January through to the end of March. The footballers have received a more favourable throw of the dice with four of their seven games at home in Tullamore – retaining their Division 2 status will be the priority and their first game away to Clare on January 30 will be absolutely crucial to their prospects.

The hurlers will receive a major examination of their credentials in Division 1. Promoted from Division 2A and the Christy Ring Cup this year, they will be crossing hurls with the country's top teams. The draw has not been as kind to them as three of their five games are away and they open and close with teak tough games out of the county – against Galway in Salthill on Sunday, February 1 and at All-Ireland champions, Limerick on Sunday, March 20.

Offaly's two home hurling games, against Cork and Clare are both in Tullamore. In previous years, a home game has generally been fixed for Birr but with only two fixtures in the 2022 NHL, it has been decided to go with both in O'Connor Park – this year, a home game against Down was switched from Birr to Tullamore at the request of the Offaly team management.

The championship fixtures for 2022 have also been made. Offaly will compete in the Joe McDonagh Cup in hurling and will start with an away game against Antrim on April 16, followed by Meath at home on April 23, Down away on May 1, Kerry away on May 14 and Carlow at home on May 21. The top two teams will contest the final on June 4.

In the Leinster Senior Football Championship, Offaly are away to Wexford on Sunday, April 24. The winners play Dublin on Saturday, April 30. While venue details have not been announced for that quarter-final, it is likely to be a home game for either Offaly or Wexford – had Offaly beaten Kildare in the Leinster championship this year, they would have played Dublin in O'Connor Park and Leinster Council will be keen to level the playing field by taking the Dubs out of Croke Park for early games.

Meanwhile some Offaly football, hurling and camogie teams will have to ease back a bit on the Christmas turkey and cake as they keep one eye on big games coming up in early January.

Clara, the Offaly senior “B” football champions, continued their good form when they beat Kilcock by 1-9 to 1-7 in the Leinster club intermediate football semi-final on Saturday. Clara were dismayed to be relegated from senior in 2020 and have bounced back into the top flight at the first attempt. They are very keen to take advantage of their unwanted journey into lower level football by winning a provincial title for the first time and they will play Trim of Meath in the final on Sunday, January 16 in Navan.

Offaly intermediate football champions, Clonbullogue have continued their red hot form into the Leinster Club Junior Football Championship. Playing some sensational attacking football, they have steam rolled their way through the competition and destroyed the Kilkenny intermediate champions, O'Loughlin Gaels by 3-16 to 0-6 in the semi-final in Freshford on Sunday morning. They face Kildare opposition, Kilcullen in the final on Saturday, January 15 in Newbridge.

Shamrocks have gained some consolation for their defeat by Birr in the Offaly Intermediate Hurling Championship final. Despite losing, they represented Offaly in the Leinster Club Junior Hurling Championship as a second team of senior clubs is not allowed compete at this level. They have qualified for the final in impressive style and face Kilkenny's Moincoin on Saturday, January 8 in Nowlan Park.

St Rynagh's camogie team have once again shown their quality outside of Offaly. The dominant force in Offaly camogie for a few years, St Rynagh's qualified for the 2020 All-Ireland Club Intermediate Camogie Championship final with a convincing 3-15 to 1-3 All-Ireland semi-final win over Eglish of Tyrone in Templeport, Cavan on Sunday last. The Offaly senior champions were among the clubs who furiously resisted plans by the Camogie Association to shelve the 2020 provincial and All-Ireland championships earlier the year. After their protests, a change of heart took place and as expected St Rynagh's have shown a great appetite for this level of competition.

They will face Gailtir of Waterford in the All-Ireland intermediate final on the weekend of January 15/16 – Gailtir broke their hearts in the 2019 All-Ireland final, snatching victory with a late goal.

Incidentally, the St Rynagh's senior hurling team were left to reflect on what might have been when Ballyhale Shamrocks destroyed Clough-Ballacolla of Laois in the Leinster club Senior Hurling Championship final at Croke Park on Sunday. St Rynagh's had victory snatched from their grasp by the Kilkenny champions in the semi-final and will look back with huge regret on a game where they were the better team and almost had it in the bag.

Colaiste Choilm, Tullamore have also embarked on a great adventure. Competing in the Leinster Colleges Senior Football Championship for the first time since the early-mid 1990s, they have competed very well, advancing out of a group with St Mel's of Longford and Moate Community School. They beat St Peter's of Wexford in an enthralling last 16 extra time shootout in Stradbally on Monday. Five points up near the end of normal time, the former Tullamore CBS were hit by 1-3 to trail by a point in injury time. A superb Harry Plunkett free forced extra time and they edged home here by 2-12 to 1-14.

Colaiste Choilm have competed in “B” football since the mid 1990s but decided to give the top flight a go this year, having won the Leinster “B” title last year. It has yielded a rich dividend and they will play a combined Wexford Schools side in the quarter-final at a neutral venue – possibly Stradbally again – on Saturday, January 15.

See Tullamore and Midland Tribune for reports on all games.