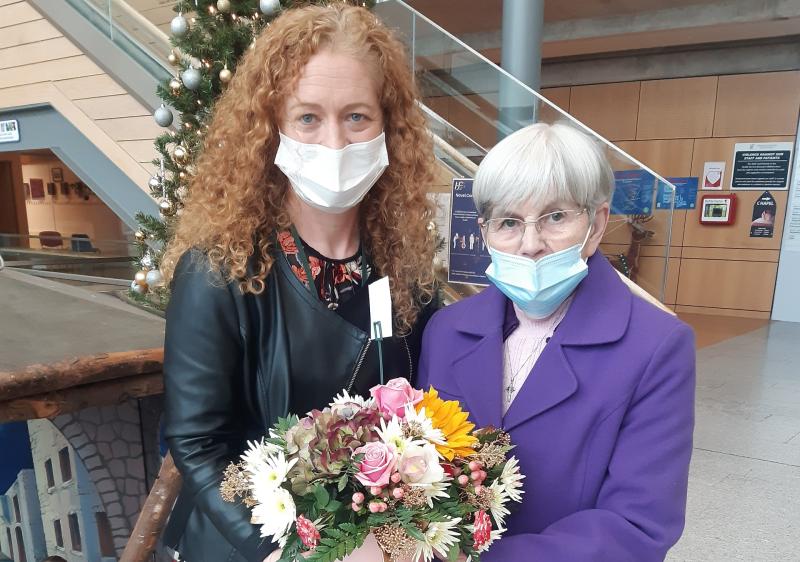 A BEAUTIFUL bouquet of flowers was presented to Sr. Concepta O’ Brien, Mercy Convent, Tullamore by Louisea Burke, Director of Nursing at the Midlands Regional Hospital in Tullamore at an informal reception in the hospital recently.

Louisea expressed her gratitude to Concepta for her years of service in visiting the patients, distributing Holy Communion and erecting the hospital crib at Christmas time with the assistance of her co-workers.

On receiving the flowers, Concepta expressed her gratitude to all the staff, past and present. She was delighted to know that the tradition of erecting the crib will be continued by others well into the future.

Concepta was born in Corofin, Co. Galway on November 12, 1933, one of a family of four, having three brothers. She lived on the family farm and attended primary school in Ballinderry, Co. Galway, until she was twelve years of age. She completed her secondary school education as a boarder in Tuam.

She expressed a wish to become a member of the Sisters of Mercy in Rochfortbridge, Co. Westmeath, where her cousin Maureen already was a member of the community. She entered in September 1952. She went to Carysfort College, Blackrock, Co. Dublin to train as a Primary School Teacher. When she qualified, she began her teaching career in the primary school in Rochfortbridge where she remained until 1979.

She was transferred to Tullamore convent and taught in Scoil Mhuire from1979-1998 when she retired at aged 66. Scoil Mhuire had a larger pupil intake than Rochfortbridge.

As well as being a competent teacher, she also immersed herself in after-school activities. She started taking camogie training after school and at weekends. She became involved in inter-school competitions and her past pupils fondly remember those outstanding days. She also took her pupils on school tours and some overnight stays especially to the Isle of Man. The class enjoyed the boat journeys and they still reminisce about their weekend after so many years.

Following her retirement Concepta studied for a year at All Hallows College, Dublin. When she returned to Tullamore she became involved in parish ministry. She helped as Eucharistic Minister and in hospital visitation. All the people who touched her life down through the years have enriched Concepta. She now enjoys her time in Tullamore Convent, devoting herself to prayer and helping out with little jobs around the convent.

Tullamore Hospital owes a deep debt of gratitude to Sr. Concepta who was one of the last links between the convent and the hospital. Her gentleness and kindness touched the lives of many patients as she carried out her pastoral care work in the hospital.

It is always nice to see Sr. Concepta back in the hospital at Christmas time and it was with great pleasure that hospital staff and management could mark her contribution this year.