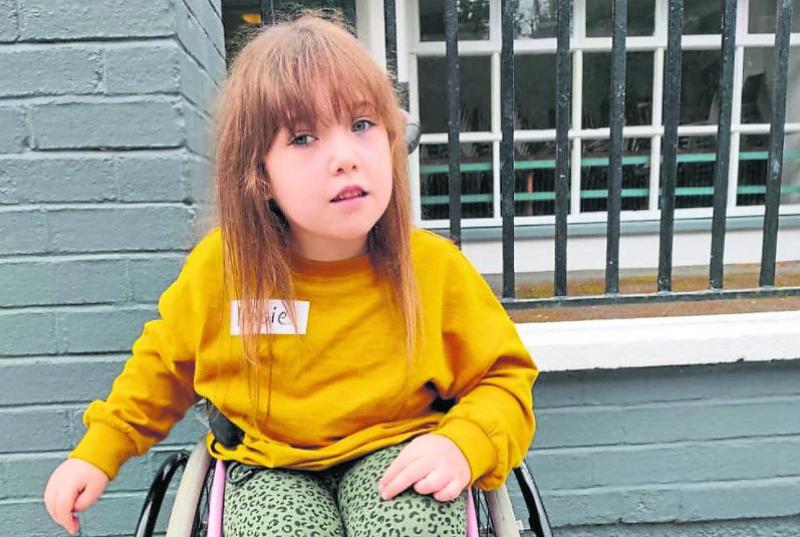 A six-year-old girl from Offaly has been waiting two years for an essential operation.

Shinrone girl Rosie Mortensen suffers from Spina Bifida and Hydrocephalus, which is a deteriorating condition. Her parents Jessie and Gareth say her condition has deteriorated “massively” during the last two years and she is confined to a wheelchair.

Jessie told the Midland Tribune that she and Rosie first met with a paediatric orthopaedic surgeon in early 2019.

“We met again with him in September 2019 and he told us that he hoped to carry out the surgery on Rosie in December 2019; but nothing came of that. Since then we have been waiting forever and Rosie's condition has been getting worse.

"She received a date for the 4th of October last but this was cancelled and we never received a new date.”

Jessie said she and Gareth have come together with other parents to form a group of parents of children with Spina Bifida and Hydrocephalus. The group has written a letter to the Minister for Health asking him “to make some changes for our children.”

The group has the names and details of 82 children who are waiting for orthopaedic operations. The group has also been heavily publicising its cause in local and national media.

Rosie was born with Spina Bifida and Hydrocephalus and is a full time wheelchair user. In early 2019 her mother noticed some tightness in Rosie's legs following on from multiple fractures of her femurs.

“We finally were called to clinic in December 2020 where we met with the surgeon and his team, Rosie was x-rayed and it was discovered that one of her hips had become dislocated, and that she now had scoliosis with a 30° curve on her spine. They still had no date to offer us for surgery so again I lodged a complaint with risk management and eventually in March of this year I lodged a complaint with the Ombudsman for Children. I requested an appointment with Connor Green as I had become increasingly concerned by her deterioration.”

“Four days before the surgery was due to take place it was cancelled, with no future date given and the reason for the cancellation being that there was a shortage of beds and all elective surgeries were being cancelled. I have phoned several times a week since that and electives have been cancelled every day since which is seven weeks in a row. You can imagine the difficulties that we then faced having to explain to her that her surgery wasn't going ahead. It was extremely upsetting for both Rosie, ourselves and our families.

“There were over 130 comments on that post many of which were other families in the same situation. So this is where the paediatric advocacy group stepped in.They began speaking to all of the families affected and set up some zoom meetings. They now have the names and details of 82 children with Spina bifida and or Hydrocephalus alone who are waiting on urgent orthopaedic intervention.”

“Rosie's surgeon Connor Green and Prof. McCormack adressed an Oireachtas health committee on the 11th of November and Mr Green told them that these waiting list numbers have always been there since before Covid and before the cyber attacks.

He later said in an interview that the solution to this problem was quite simple - they have found space in Cappagh Hospital which will only be used for elective procedures. The problem with Temple Street is that they are both acute and elective so if an orthopaedic emergency comes in when an elective procedure is planned, the acute case will obviously take priority. That wouldn't happen in Cappagh and Mr Green reckons that will increase the amount of paediatric surgeries by 400% and has costed it at about €5.1 million, which is, in the grand scheme of things, a drop in the ocean! All they need is the green light to go ahead and get this up and running.