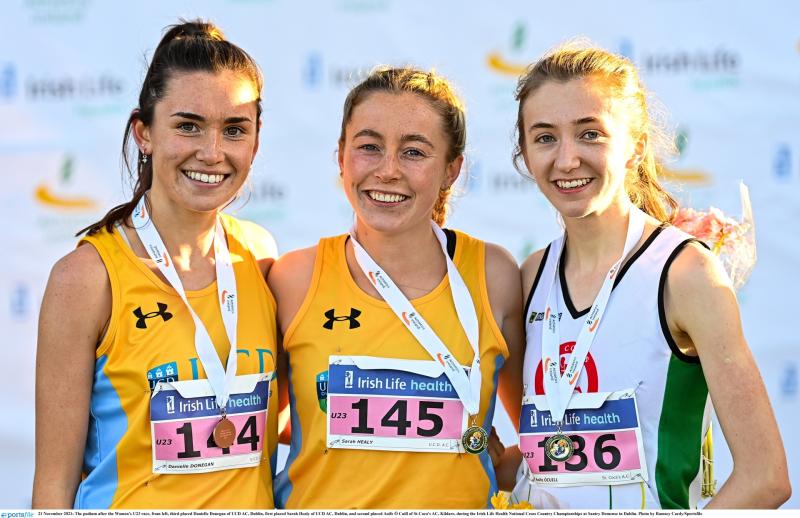 Danielle Donegan, left, after finishing third in the national U-23 cross country championship with the winner Sarah Healy and second placed Aoife O'Cuill.

THERE was great satisfaction for two Offaly athletes on Monday afternoon when they were selected on the Irish team for the forthcoming European Cross Country Championships.

Tullamore woman Danielle Donegan and Cappincur's Laura Mooney have made the Irish womens' U-23 and U-20 teams.

Donegan was an automatic selection for the U-23 team after a superb performance in the National Senior and U-23 Cross Country Championships in Santry on Sunday. A long time Tullamore Harriers member but racing in the colours of UCD, where she is on an athletics scholarship, Donegan ran a superbly steady race, pacing herself well for the 8k distance, moving up the field at every opportunity and finishing third in the U-23 grade in 28.59 – she was 18th overall.

Laura Mooney's superb form in the USA was rewarded with selection on the U-20 team. Mooney is on an athletics scholarship in Providence College in Rhode Island and has made tremendous progress this season, excelling in both track and cross country events.

Both Donegan and Mooney have been products of the excellent juvenile section at Tullamore Harriers and are now thriving as they enter into adult ranks.

The championships take place in Abbotstown, Dublin on December 12 and another Tullamore man, John Cronin, the President of Athletics Ireland, is playing a pivotal role in organising the event.

There was plenty of consolation for McGlynn, who has previously represented Ireland in these championships, as she led Letterkenny and Donegal to the team gold medals. Fionnuala McCormack didn't compete but was always going to be an automatic selection while another Tokyo Olympian Eilish Flanagan also made the cut.

They will be joined by Abdel Laadjel (Donore Harriers) who returns from action stateside as well as Dean Casey (Ennis Track AC), Scott Fagan (Metro/St. Brigid's AC), and Sean Kay (Clonliffe Harriers AC) who all performed superbly in national championship competition over the weekend.