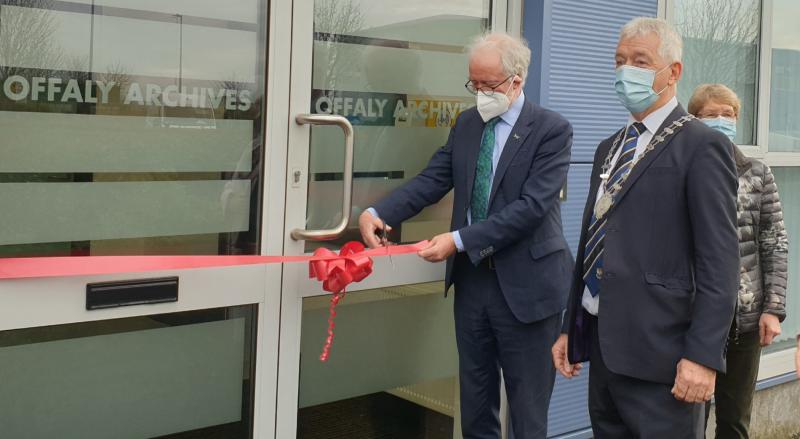 Minister Noonan was speaking when he officially opened Offaly Archives, a repository of documents from the county housed in purpose-built units at the Axis Business Park in Tullamore.

After inspecting some of the records, the Minister said: “It's just absolutely amazing to delve into that. And actually as you delve into that archive material, the stories behind that, the people, the photographs, it's just quite remarkable.”

“These records provide fascinating accounts of life in the Midlands from the early medieval period to the present day,” said Minister Noonan.

The Offaly Archives are a collaboration between Offaly History (Offaly History & Archaeological Society) and Offaly County Council, with the support of State funding and private donors.

Minister Noonan said councils around the country could replicate the Offaly project and he also spoke of the importance of keeping local records locally, especially in the context of current debates around mother and baby homes, whose survivors deserved justice and redress.

“In many cases these are the only records they have of their existence,” said the Green Party TD from Kilkenny.

Also speaking at the event, Virginia Teehan, Heritage Council chief executive, noted that Ireland still had many unresolved issues in relation to the management of archives, unlike other European countries.

For that reason, she described Offaly Archives as an “exemplar” of what could be done at national level in Ireland and she praised Offaly History and the council for how they had worked together.

“The work here that you have achieved is just extraordinary in that context,” said Ms Teehan.

An archivist herself, she emphasised the “richness” of the information in the records.

Cllr Declan Harvey, Cathaoirleach, Offaly County Council, recalled how Offaly History had begun with a premises in the gate lodge to Charleville Castle on the Charleville Road in Tullamore, then moved to a building in Bury Quay and had now expanded to Offaly Archives.

“This is huge for both Tullamore and Offaly,” said Cllr Harvey.

The facility is managed by archivist Lisa Shortall and she told the Tullamore Tribune that the oldest document in the collection dates from 1631.

It is a deed of conveyance for the purchase of land in Tinnycross, Tullamore by a man called Mathew DeRenzy (also known as Derenzie) for his son from the local O'Molloy family.

“It actually existed in an old solicitor's collection. So it was retained with the title deeds,” said Ms Shortall.

The records specifically mention “the towns and lands of Derrykilliagh and Killbeg” and say the land had been granted to the Molloys by King Charles.

Offaly Archives contains local government records such as the King's County grand jury, the boards of guardians for Tullamore, Birr and Edenderry, rural and urban district councils, town commissions and the county council.

There are also many important collections relating to Offaly's social history, including papers from the landed estates, literary papers, diaries, photographs, letters and tenants' records.

“They've been collected by both the library and the Historical Society and now they're all together under one roof so a researcher need only come here to get access to all this manuscript material,” said Ms Shortall.

An example of social history is the collection of photographs taken by the landlord Middleton Biddulph (1849-1926), Rathrobin, Mountbolus in the early 1900s.

Ms Shortall described the albums, which identify the people pictured, as “priceless”, “especially for ordinary people at that time who would never have been actually able to take a picture of themselves. They wouldn't have had cameras or photographs.”

Records are being digitised and the digital images can be viewed online on www.offalyarchives.com

The Offaly Archives premises is open to anyone but is by appointment only because all of the records are in storage.