THERE was a great air of satisfaction in Colaiste Choilm, Tullamore on Friday evening when a famous football success was celebrated. Read more below the picture 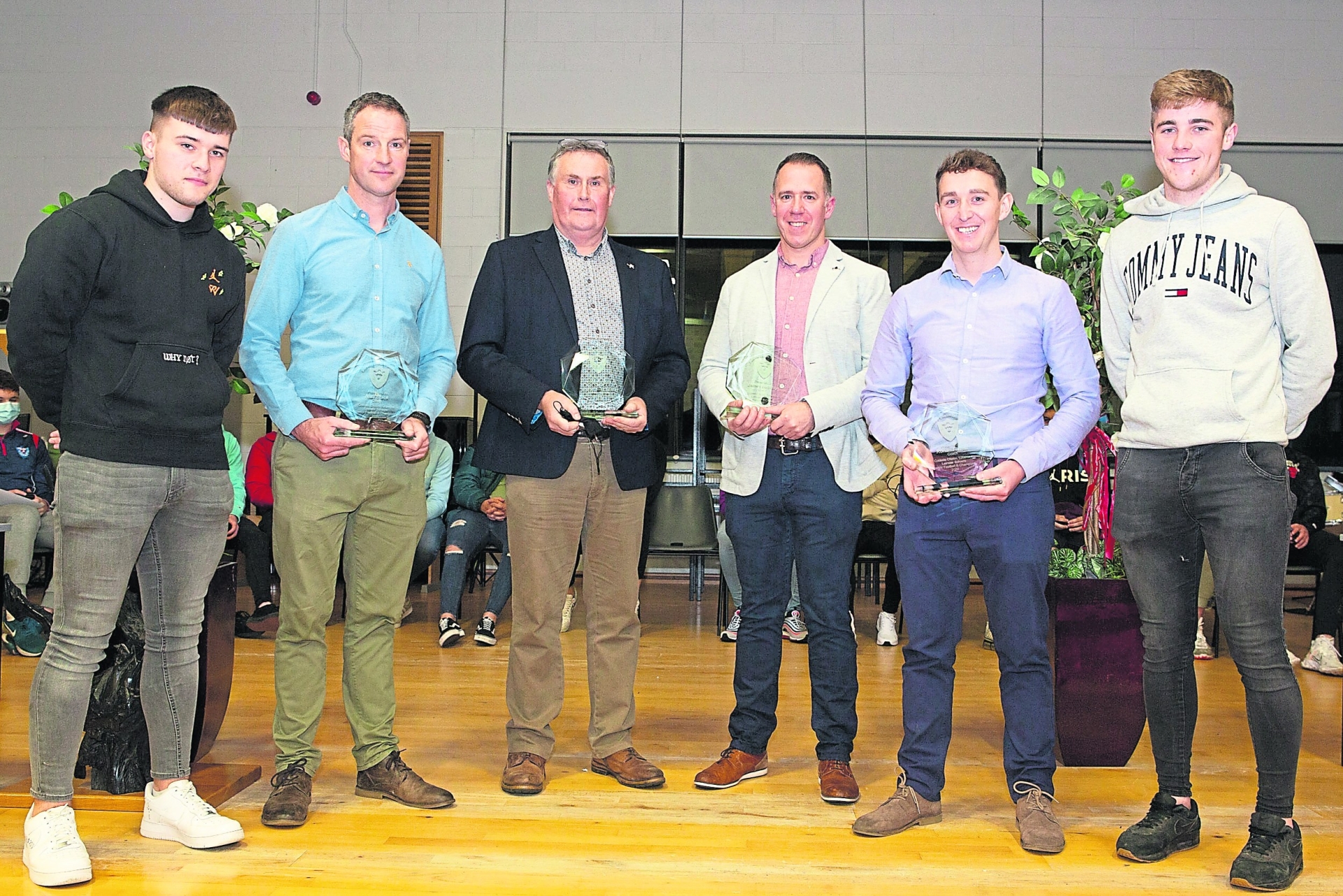 A brilliant Colaiste Choilm side won the 2020 Leinster Colleges Senior “B” Football Championship and the winning squad were finally presented with their medals on Friday evening – the presentation had been fixed and cancelled a number of times because of Covid-19.

Master of ceremonies on the evening was Ray O'Donovan and also present were the school principal, Tadgh O'Sullivan, the team managers John Lydon and Ronan Farrell, along with Niall Stack and James Buckley, who were a major part of the backroom team; Liam'hOistin, the manager of the last school team to win this championship in 1990; former Offaly hurler Colm Cassidy, who won an All-Ireland hurling colleges title with many of this team; Offaly GAA football legend, Matt Connor; a Tullamore GAA stalwart, John Keane and the Offaly minor football manager Ken Furlong, who is the current Colaiste Choilm senior football joint manager along with John Lydon and Mark Plunkett.

Mr O Sullivan  welcomed all and outlined the importance of sport and in particular, GAA in the overall development  of Coláiste Choilm students. He, as well as Niall Stack, later on, emphasised that  sporting excellence and success goes hand in hand with academic excellence and success, a fact, borne out by the success in the Leaving Cert by all these players.

Mr O'Sullivan spoke about Coláiste Choilm having an excellent sporting history of success but also a very high academic record as well.  Sport fosters discipline, organisation, a determination to succeed and a work ethic that has,  and certainly will continue to contribute to the overall development of the students of the school, Mr O Sullivan added.

Ray O'Donovan spoke about it being a historic occasion in an optimistic time for Offaly GAA. He noted that 10 members of the Offaly All-Ireland U-20 winning panel were pupils of Colaiste Choilm and were an inspiration to the present students. “The school is now playing at A level in Leinster Schools in all age groups and this is due in no small way  to the efforts of these young men as well as the success of the Offaly U 20s,” he said.

Mr O'Donovan paid tribute to Offaly County Chairman Michael Duignan, stating that h has raised the profile of Offaly Gaa in recent times and he emphasised that everyone is in this together: Primary schools, Secondary schools Clubs, Development Squads, County Teams, all for the betterment of Offaly Gaa.

He complimented all the feeder Clubs and also Líam O Reilly and the Offaly Coaching Development Programme for their continuing and very much appreciated help.

Niall Stack spoke on behalf of himself and James Buckley saying it was with immense pride in their old school that they came in to help out with this group of players and were delighted that they had contributed to their success.

Ronan Farrell , on behalf of himself and John Lydon thanked each and every one of a huge panel of players. He paid tribute to the parents and the clubs of the boys and again, re-iterated the point of everybody being together in the pursuit of excellence in Offaly GAA.

A special award ceremony took place then with the presentation of the Coláiste Choilm Footballer of the Year Award for 2019-20 and 2020 21. These awards had been announced at the virtual Graduation Ceremonies in the last few years but it was great to be able to do so in person. This is the Adam Mangan Award, a cherished award , named after a cherished past pupil of Coláiste Choilm, Adam Mangan of Kilclonfert, who sadly is no longer with us. Janette Mangan, Adam's mother, presented the award to Jack Bryant for 2020 and Cormac Egan for 2021.