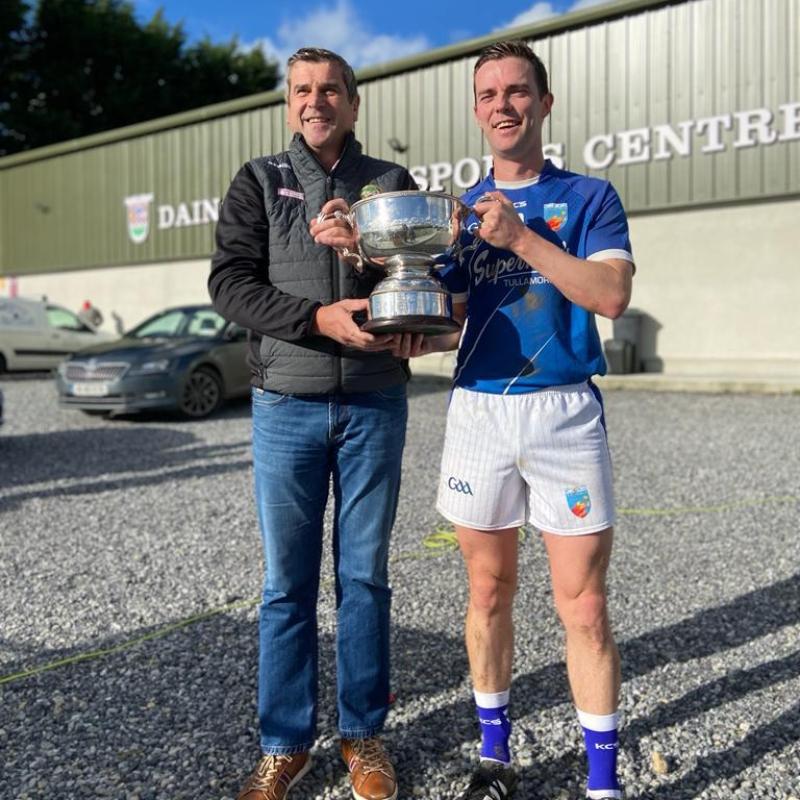 Tullamore are the 2021 Junior ‘A’ Football Champions after a comfortable win over Edenderry on Saturday afternoon in Daingean. The Blues led from start to finish as they cruised to victory.

They played with a strong wind and Shane Kelly’s goal just before the half time whistle ensured they carried a nine-point lead into the break, a lead which they never looked back from.

There were many questions over this Tullamore side before throw in. They were in a similar position last year, coming into the game favourites against Daingean, and were made pay for a slow start in the final last year.

However, any doubts or questions marks hanging over The Blues were answered accordingly inside the opening quarter. Backed by a strong breeze, they came racing out of the blocks and Mike Fox starting a scoring spree which yielded five unanswered points inside the opening 10 minutes.

Shane Kelly (two) and Kevin Williamson both pointed frees for Tullamore and another excellent Mike Fox point had them five points up with just 10 minutes played.

Edenderry struggled against the wind and they struggled to cope with the relentless Tullamore pressure. Ciaran Nolan got a rare score for Edenderry, but Tullamore responded immediately, and Peter Fox’s point gave them a five-point lead at the first water break.

With a strong breeze on their backs, Tullamore were in an unforgiving mood, and their superior fitness levels began to show in the second quarter as they took control of the game. Peter Fox caught a long ball, called a mark, turned and kicked a beautiful curling effort to continue Tullamore’s impressive start.

Edenderry did have half a goal chance when Barry Cullen’s shot bundled past Tullamore goalkeeper Anthony Lambe, but Daire McDaid was on hand to clear off the line. Edenderry captain Derek Kelly left footed point did briefly reduce the deficit to five once again, but just before the half time whistle, disaster struck for Edenderry.

Tullamore’s full forward Shane Kelly pounced on an Edenderry wayward free in their full back line and the experienced forward rolled the ball neatly past Eric Corcoran to give The Blues a healthy nine-point lead at the half time break.

Scores dried up for a period in the second half, and with Edenderry badly needing a goal, they kicked some wasteless balls wide and into the Tullamore full back line. They did not cope well with the wind, and they still struggled for scores with the aid of the breeze. Remarkably, they went the whole third quarter without a score, a period which was vital to them if they were going to mount a comeback.

Kevin Williamson scored two quick-fire frees to increase the gap, and just before the second water break, another Shane Kelly free increased the gap to 13.

Edenderry did finish well and to their credit, they battled to the end. Sean Moriarty and substitute Daniel Lowry both pointed late on for them and they did get a consolation goal when Ciaran Breen’s low shot trickled into the net.

However, it was a mere consolation goal and two excellent Jay Sheerin points for The Blues were the icing on the cake as they ran out comfortable winners in the end to claim the silverware.