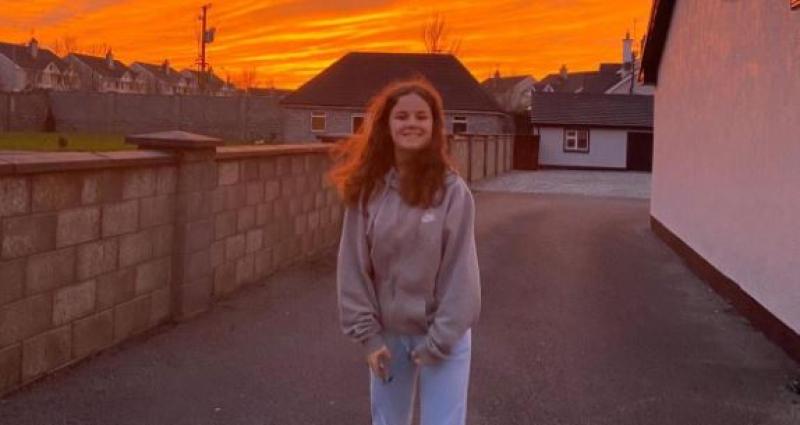 'SPECIAL ANGEL': Aoife Doyle, as photographed about an hour before her tragic death by her best friend Cara Cronly

Drivers involved in road traffic collisions should be tested for the presence of drugs, the Offaly coroner said on Friday.

Speaking at an inquest in Tullamore, Raymond Mahon, Offaly county coroner, said it seemed illogical to him that a test for alcohol is mandatory but one for drugs is not.

Mr Mahon was responding to relatives of a teenage pedestrian who died when she was knocked down by a jeep last year.

Emer Doyle, aunt of the victim, 14-year-old Aoife Doyle, questioned why a sample was not taken from the driver Eric Dunne but her niece was subjected to toxicology tests during a post mortem.

“It's just something that the family are very upset about,” said Ms Doyle.

Sergeant Simon Murphy said while the gardai are obliged to test for the presence of alcohol, there is no such requirement for drugs and there was no evidence to suggest Mr Dunne had drugs in his system.

Mr Dunne, 26, of Bellair, Ballycumber, a learner driver who had failed his driving test three times, pleaded guilty to dangerous driving causing death at Erry, Clara and was sentenced to three and a half years in prison, with the final 18 months suspended.

He was also disqualified from driving for 10 years after the court heard he had been texting from his mobile phone when his Hyundai Santa Fe struck the girl head-on.

Darragh Scully, uncle of Aoife Doyle, said it had been stated at the court hearing that Mr Dunne was addicted to cannabis.

“I'd like to know what evidence you need above the death of a child to take a drug test from someone,” said Mr Scully. “It's something that's very hurtful to the family.”

Aoife Doyle was walking on the road between Clara and Ballycumber with her best friend Cara Cronly on the evening of March 20, 2020.

They had taken photographs of the sunset and were walking two abreast on the right hand side of the road when Mr Dunne's jeep struck Aoife, who was on the outside.

Sinead Cronly, mother of Cara, told the inquest Aoife was a huge part of the Cronly family and their concern was why the question of Mr Dunne's speed had not been pursued.

Ms Cronly said she believed he was driving at more than the permitted speed on the road, 60kph, and they had seen him in a different vehicle a month later driving around Clara unaccompanied with no L plates displayed.

“I saw him and a lot of my friends and family saw him. And he didn't care, he had no respect,” she said. “How dare he do that after killing our little girl.”

In an emotional statement to the coroner, Ms Cronly added: “We're so heartbroken, my family, the Scully family and the Doyle family.”

“Her parents are so heartbroken they cannot be here, they cannot face to come in here. My daughter has to live the rest of her life without her best friend and it's all his fault.”

The inquest heard Aoife Doyle was thrown into a drain by the impact and despite the efforts of people who came on the scene, including a nurse Ethna Kenny and her husband Michael Corcoran, she did not respond to CPR and was pronounced dead.

Sergeant Murphy said Mr Dunne, who was at the scene when gardai arrived, admitted when interviewed later he knew he had hit something and said he drove on for about a minute and then turned around and went back, where he saw two shoes on the road.

While he could recall the time leading up to the collision and the time after it, he stated he could not remember the actual collision itself. An alcohol breath test carried out at the scene was negative.

There was damage to the front of his vehicle and some debris on the road.

A forensic investigator, Garda John Cregan, said an examination of Mr Dunne's mobile phone indicated he was texting at the time of the impact because there was a 60-second gap between his last message and his attempt to make an emergency call.

Garda Cregan said it was a dry evening and the collision occurred on a long, straight, dry road.

The inquest was told both girls were wearing light coloured clothing and Cara Cronly had the light on her mobile phone switched on.

Garda Cregan said the speed of driving could not be determined because of the absence of a brake mark and other evidence which could be used to make calculations.

The collision occurred at about 7.15pm and occurred on a road 5.8 metres wide with no hard shoulder.

The vehicle was in good working order and there was no evidence anything hindered the driver's vision on the road, which had a 60kph speed limit.

In a statement which was read at the inquest, Cara Cronly said Aoife Doyle had been in her house where they were working together on a science project.

They noticed a lot of people were posting photographs of the sunset so at 6pm they decided to go for a walk and take pictures.

Cara said she had the torch on her phone switched on and while it was getting dark, it was not “pitch black”.

They saw a car coming and then she heard something and stepped in and then saw Aoife was no longer beside on the road but her shoes and socks were.

She called her mother from her mobile and got help from other people who came upon the collision.

Dr Charles d'Adhemar, pathologist, Tullamore Hospital, gave evidence of carrying out a post mortem and said the victim suffered multiple injuries including fractures to the skull.

Death was due to skull fractures caused by massive blunt force trauma after being struck by a vehicle.

Dr d'Adhemar said the injuries were to the front of the body and from his experience, the impact must have occurred at a significant speed.

He said children are more at risk than adults from a big vehicle like a Santa Fe because they tend to take the full force of the impact rather than the legs and trunk.

Mr Mahon returned a verdict of homicide by dangerous driving and said the cause of death was massive blunt force trauma brought about by the manner of the driving.

He said the use of mobile phones had become pervasive in every aspect of society and it was accepted in this case Mr Dunne had been texting when he collided with Ms Doyle.

“It seems to me it's akin to driving while reading a book,” he said.

He recommended that Offaly County Council review the speed limit on the road.

Mr Mahon also said the authorities needed to examine the “illogical” situation where despite how “society has evolved”, the requirement for an alcohol breath test had not yet been extended to a drug test.

Ronan Scully, an uncle of Aoife Doyle, said it is important that the message go out to people that they should not call or text while driving.

Mr Scully also thanked the emergency services and everyone in Clara, Offaly and around Ireland for the many messages of support the family had received following the death of Aoife.

“They are special people and special angels and we thank them for looking after our angel Aoife,” he said.