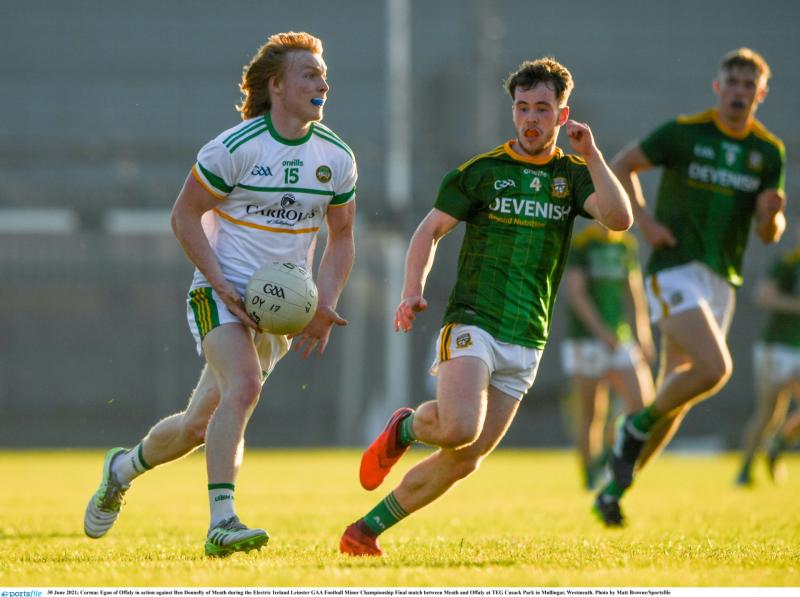 Cormac Egan had a fine game in the Offaly attack.

The Man Behind the Wire

IT was with bitter disappointment that supporters across the county learnt that flying Tullamore attacker, Cormac Egan could not play in Saturday's Senior Football Championship semi-final against Ferbane and that it looks like his year is now over.

Another brilliant young Tullamore forward John Furlong couldn't start because of injury, though he did come on as a sub while exciting Ferbane forward, Cathal Flynn sported a heavy bandage on his leg and was clearly not firing on all cylinders.

Egan's injury is causing the most concern. He has had a bad hamstring tear and while he is still being examined by medical personnel, it looks like his season is at an end. That is a devastating blow to the young player, whose performances for Offaly U-20 footballers brought him to national attention this year.

With his distinctive mullet style haircut, his lightening pace and his audacity in chipping balls into the hand while running at full pace, he created a buzz of excitement for football lovers everywhere this year.

These injuries are a symptom of the very heavy games programme they have had to go through in Offaly this year. After Offaly's incredible All-Ireland U-20 football title win, they haven't had time to catch their breath. They were straight into the club scene with the 2020 minor football final to be completed first – Egan and Furlong were outstanding as Tullamore won this.

Since then it has been almost non stop with a brutally punishing schedule of two games almost every week for Egan and Cathal Flynn in particular.

Firstly, the 2020 U-20 championships had to be completed and then it was into the 2021 campaigns. Both Egan and Flynn are dual players, playing both senior and U-20 football and hurling for their clubs – Furlong also hurls but isn't on the Tullamore senior “B” hurling team and the club have a duty to limit the amount of junior hurling games he plays, even if he would be good enough for them.

It is a very delicate balancing act and the Offaly GAA Competitions Control Committee deserve plaudits for the very efficient manner in which they have ran fixtures this year.

They have had a huge volume of games to get through and have found themselves in extraordinary territory because of Covid-19 lockdowns and restrictions. They had a large number of outstanding competitions from 2020 to get completed this year before they could tear into the 2021 schedule.

The Senior, Senior “B” and Intermediate Hurling Championship finals from 2020 all had to be completed along with most of the underage finals. And most of these couldn't take place until August, after the completion of Offaly's inter-county season.

The 2021 programme has ran like clock work since it started in August, with a hurling weekend followed by a football weekend. There has been a massive schedule of games and the CCC have scarcely put a foot wrong. Clubs and players knew where they stood, they knew postponements wouldn't be granted for internal events or weddings and the only time a game has been called off is because of funerals – and in one unfortunate situation, when a referee couldn't be secured for a junior hurling fixture.

We are now down to finals in most of the football championships and the hurling ones will be coming on stream in the next two weeks – hurling is a bit further behind as there were bigger groups and more games to be played in the Senior, Senior “B” and Junior championships.

It is an absolutely fantastic achievement to have the competitions run on schedule but there has been downsides and one has been the volume of games inflicted on some players.

The GAA of course is not and cannot be all about the elite players but the schedule has been very hard on some of the most promising players in the county. It would be an absolute tragedy if Cormac Egan's injury ended up being a career threatening one. Hopefully it isn't but it has happened promising young players in the past and Offaly has an onus to protect players like this.

It has also placed their clubs in an invidious position as they balance their own duty of protecting players with their need to win games and championships. Tullamore have taken players off in games, not started them when there were doubts and there will always be questions about if they have done enough in this regard.

They didn't use John Furlong at all in the 2020 U-20 final against Durrow, though they probably should have taken off Cormac Egan once the game was in the bag – and they were out of sight early in the second half. It is very tricky territory for Tullamore and Ferbane footballers and Belmont hurlers. Clara have also found themselves in a similar boat with U-20 players Ed Cullen and Cormac Delaney getting a large volume of football and hurling games.

It is easy to see why the Competitions Control Committee ploughed ahead with the 2021 U-20 championships. The U-20 grades are popular among clubs and players, they mean something to everyone involved and playing them in the worse weather at the tail end of the year is far from an ideal situation. There are a lot of players involved in this level but the competitions should have been put on the long finger until the county adult club championships were completed.

There would have been little criticism of them for doing so and it would have been the right thing to do. Not one club or manager could augur with a decision made to protect young players from too many games. And you would have been depriving very few footballers or hurlers of action – the best U-20 players will always make their club's senior or first team and almost every player with get adult action at some level.

If Tullamore win the Senior Football Championship, they will be into a Leinster club campaign and it wouldn't be right to push the U-20 competitions out for this but their adult hurling season will be over in the next few weeks and that would at least alleviate the strain.

U-20 competitions aren't simple ones to get completed and it is a fact of life that players at this level receive more games and demands than at any other stage in their life. They are in school or college, most are getting games there as well and Offaly GAA should have erred on the side of caution by holding off on these competitions for the duration of their adult championships. It is a shame for players to miss out on big games because of overload and it is also a shame for supporters to miss out on seeing them in action during what is an unexpectedly exciting time for Offaly football.

1 – Name the club that lost three successive junior football finals and won on their fourth final in a row?

2 – Offaly played Antrim in the 1985 All-Ireland senior hurling semi-final. All but three of the starting fifteen appeared in the 1984 All-Ireland final in Thurles. Name the three?

3 – The Furlong family of Tullamore have represented Offaly in how many successive decades?

How many All-Ireland senior hurling semi-finals did Martin Hanamy play before he won one?

2 – No club can claim to have won three junior football titles in a row? One parish did win three in successive years. When and name the clubs?

3 – Offaly's first victory over Louth in the Leinster SFC was at the ninth attempt. When?