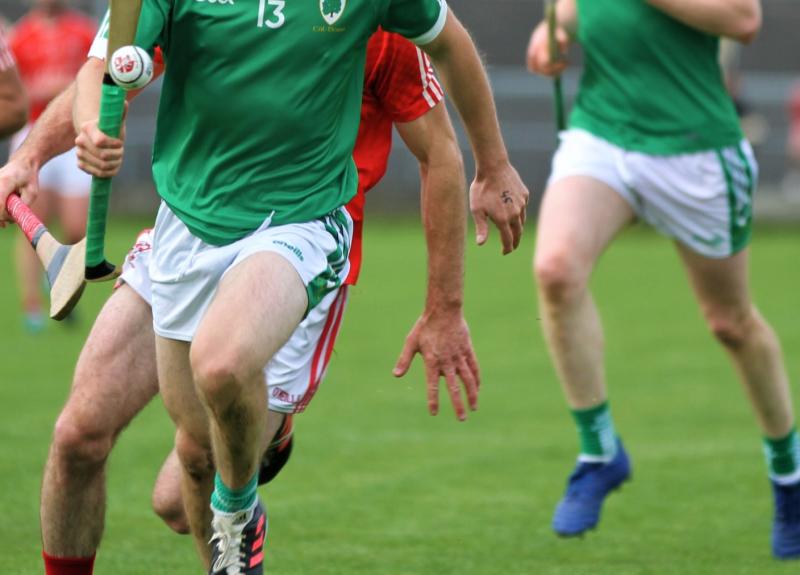 Kevin Connolly runs at the Shinrone defence for Coolderry.

Coolderry dished out a 36-point hammering to Drumcullen in an impressive performance in Birr on Sunday morning. Brian Carroll was the star of the show yet again, contributing 3-15 in an impressive victory for the 2018 Champions.

They were outstanding in every position and look a seriously dangerous side at the moment. It was a bitterly disappointing day for Drumcullen and they only managed a single point from play in a game where they were completely outclassed by a far superior side.

Coolderry have relied on the accuracy of the hurl of Brian Carroll in most of their games this season and this was no different with the veteran forward firing over six points in the opening 10 minutes, including two from play.

Drumcullen were slow to settle into the game and they only managed three points in the opening quarter thanks to the placed ball accuracy of Conor Gath.

Kevin Connolly was the first Coolderry man other than Brian Carroll to register a point and two further frees from Carroll and an Eoin Ryan point gave Coolderry a seven-point lead at the first water break.

Coolderry carried all the momentum into the second quarter, and they were in cruise control firing from all cylinders. Kevin Connolly was on fire in the first half scoring five points from play as Coolderry found him time and time again in the corner.

Brian Carroll was his usual accurate self on frees and he fired over two frees in the second quarter to put Coolderry in complete control.

Disaster struck for Coolderry in the 29th minute. Padraic Cashen came to gather a high ball. When he was coming out with the ball in hand, he attempted to handpass the ball but it was brilliantly blocked by Daniel Miller with the block falling straight into the hands of Carroll who buried to an empty net.

Coolderry smelt blood and went for the jugular. Brian Carroll played a terrific cross-field ball into the hands of Kevin Brady and with Brady racing goal bound, he unleashed a rocket which flew into the back of the net, opening up a 17-point lead at the half time break.

Coolderry were in an unforgiving mood and any expectations that they might ease up were put to bed with their third quarter performance. Substitute Cian Burke fired over the first point of the second half and two minutes later, they had their third goal. Daniel Miller turned provider again, this time setting Kevin Connolly one on one with the latter making no mistake in burying it to the back of the net.

Coolderry had their fourth goal soon after when Martin Corcoran bundled the ball home in amongst a crowd of bodies from both sides and just before the second water break, Carrroll buried a penalty for his side after Daniel Miller was fouled inside the small rectangle.

It was a devastating yet remarkable 15 minutes from Coolderry in which they outscored their opponents 3-04 to 0-00.

Coolderry cruised home at their ease in the final quarter and they added a sixth goal when a long Brian Carroll free dropped into the net. Daniel Miller, Trevor Corcoran and Cian Burke all contributed to the scoreboard late on as Coolderry eased home to record a comprehensive 36-point victory over their opponents.