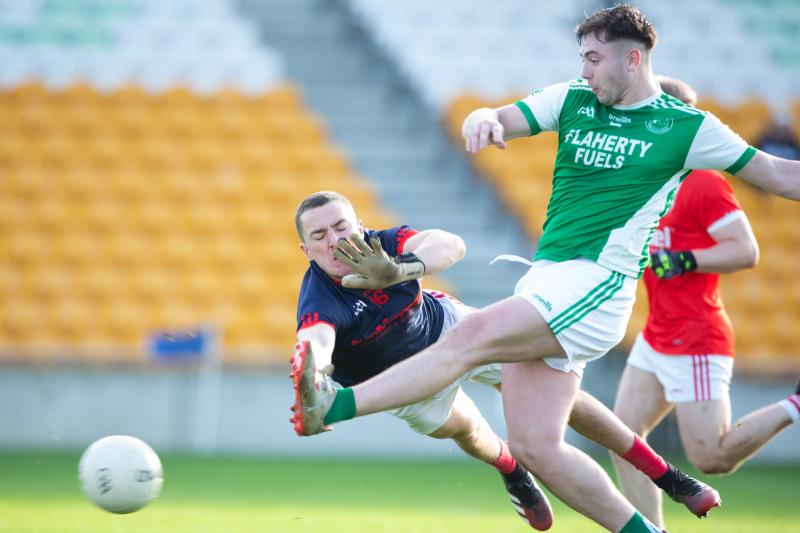 A Ferbane goal in their quarter-final win over Edenderry.

THE draws have been made for the semi-finals of the Offaly Senior, Senior “B”, Intermediate and Junior Football Championships.

The draws had been scheduled to take place on Offaly GAA Facebook Live but an international outage for the social media giant meant that this could not happen.

Most interest focused on the Senior Football Championship where champions Rhode face a renewal against surprise packets Durow, and Tullamore meet Ferbane. Durrow shocked Rhode in the first round of the championship and also drew with Ferbane and beat Cappincur to top the group. They have added a great touch of romance to the championship but will be underdogs against a Rhode side who are down key defenders in Eoin Rigney and Jake Kavanagh while forward Paul McPadden was stretchered off in their facile quarter-final win over Shamrocks on Sunday. They, however, remain championship favourites with forward Niall McNamee playing some of the best football of his long career.

The Tullamore and Ferbane game is a repeat of last year's semi-final which Tullamore won on a penalty shoot out. Ferbane are also down players with Oisin Kelly getting a cruciate operation this week and Cian Johnson has played no part this season with a groin injury. Joe Maher got a straight red card in their very impressive quarter-final win over Edenderry on Saturday and Ferbane will have their work cut out to get this overturned. Maher was sent off before half time after an off the ball incident and to get the player off, Ferbane will have to produce video evidence to prove the referee made a mistake – the fact that the incident happened so far off the ball means that this will be hard to get.

In the Senior “B” Football Championship, favourites Clara will face Walsh Island, who beat St Rynagh's in the quarter-final but at a high cost as midfielder Colm Gavin and key forward John Doyle received straight red cards in a late brawl. Walsh Island will be examining recorded footage of the game to see if they have any grounds for appeal. In the other semi-final, Tubber will meet Ballycumber in a mouth watering local derby. Ballycumber had a fine win over Erin Rovers in the quarter-final last Friday evening.

The semi-finals for the Intermediate Football Championship have thrown up two mouth watering ties. Clodiagh Gaels will meet an improving Raheen in a parish derby while Daingean will face Clonbullogue in the other game. Clodiagh Gaels surprised Raheen in the group stages but the Geashill-Cloneygowan club have come good since then and beat St Brigid's in the quarter-final at the weekend. Daingean also face a renewal, having beaten Clonbullogue in the group stages on their way to topping the table. Clonbullogue, however, have come on in leaps and bounds since then and their form in their last group game against St Brigid's and the quarter-final against Shannonbridge on Sunday makes them title favourites.

In the Junior Football Championship, favourites Tullamore will meet Rhode while Doon have Edenderry. Rhode beat Tullamore's second team, An Tulach Mhor in the quarter-final on Saturday while Edenderry rallied in the second half to beat Ballinagar on Sunday.