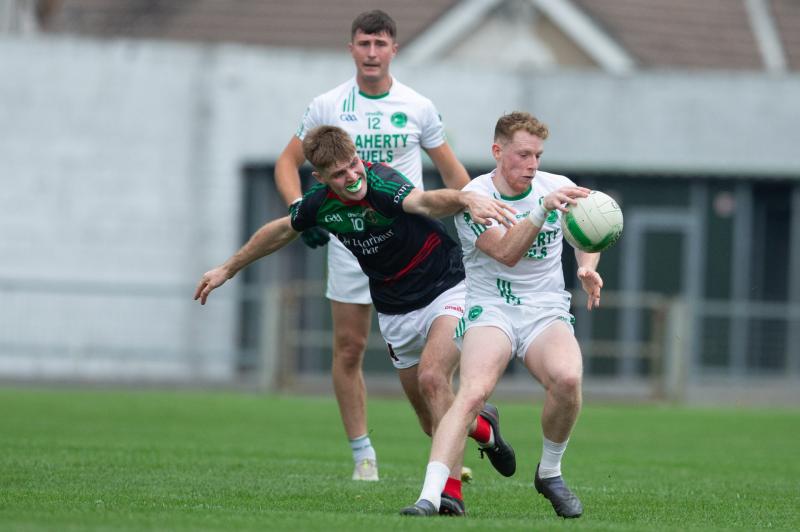 DURROW and Tullamore booked their place in the semi-finals of the Offaly Senior Football Championship on Sunday evening.

The final round of group games took place with results going more or less as expected and it paves the way for the knockout stages. First up will be two quarter-finals on the weekend of October 2/3 where champions Rhode will meet Shamrocks and Edenderry and Ferbane clash in what should be one of the games of the championship. There will be a draw for the semi-finals and the relegation play off is between Cappincur and Bracknagh.

Durrow have been the big surprise packets of the championship, stunning the Offaly football world by topping group 1 and claiming the automatic semi-final place from here. They shocked champions Rhode in the first round. Rhode were understrength that evening but Durrow showed that it was no fluke by drawing with Ferbane in the second round in a game that they could and perhaps should have won.

They continued their excellent form with a comfortable 1-13 to 0-11 win over Cappincur in their final group game in Ballinagar. It was an important win for Durrow as they knew that a victory here coupled with a Rhode win over Ferbane would secure them a semi-final place – Ferbane could have denied them on scoring difference if they beat Rhode.

As it was, Rhode did them the favour, getting their season motoring with a 4-12 to 3-13 win. Rhode have looked vulnerable this year and it looks like full back Eoin Rigney could be out for the season with a knee injury but this was better from them. Niall McNamee was in sensational form, scoring 3-8, 3-6 from play.

That win enabled Rhode to finish second and on paper, it gives them a more favourable quarter-final draw against Shamrocks as opposed to Edenderry.

In group 2, a draw with Edenderry was enough to give Tullamore top spot and a semi-final place. They both finished on four points but Tullamore topped by virtue of a better scoring difference. Them and Edenderry served up an exciting game in Gracefield. Tullamore controlled the first half and led by 0-9 to 0-4 at the interval. Second half goals from Cian Farrell and Ciaran Farrell put Edenderry on the cusp of victory before Tullamore gained the initiative again and an injury time Alex Kenny point gave them a share of the spoils.

Shamrocks defeated Bracknagh by 1-11 to 1-8 in a winner takes all showdown in Geashill with the victors into the quarter-final and the losers into the relegation play off. Bracknagh were the better team in the first half but this was not reflected in their interval lead of 1-5 to 1-4 – Peter Cunningham got a penalty goal for Bracknagh while Shamrocks quickly replied through Jack Bryant.

Shamrocks played much better in the second half. They were helped when Bracknagh corner back Eoin Hyland was sent off in the 37th minute for a second yellow card and gradually Shamrocks got on top and got the scores for the win.

It is emerging into a very interesting championship. While Rhode have blown hot and cold, they remain the team to beat. Tullamore and Edenderry both have the ability to win it and while there are question marks about Ferbane's form, they have a proven pedigree and are contenders. Durrow and Shamrocks are the two outsiders, though Durrow's form commands utmost respect.

Bracknagh will be slight favourites to beat Cappincur in the relegation play off but it's 50/50 really. Cappincur have been the worse team in the championship so far but it looks like Bracknagh will be without their star player Peter Cunningham for this as he is scheduled to go into isolation for two weeks before going on an Army tour of duty to Syria in early October.