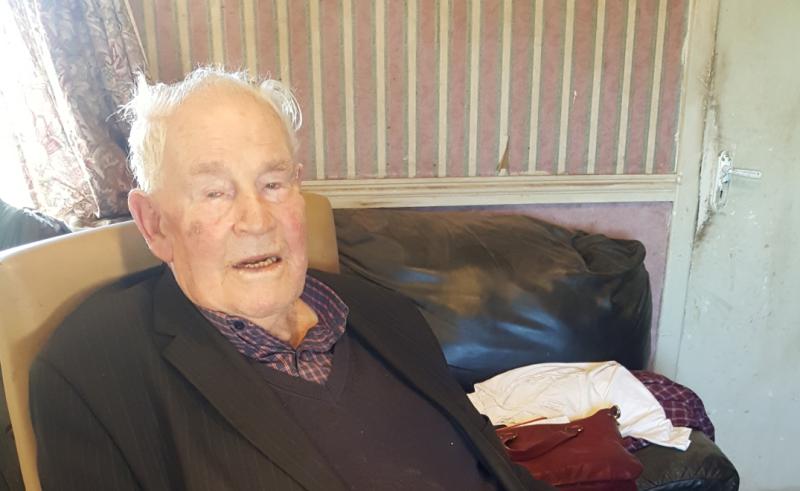 The death of the late Pe (Peter) Molloy on August 23 truly marked the end of the era.

Pe passed away peacefully at home in Roscore, Blueball, in his 99th year.

Father of five children - Ann, Con, Fintan, Peadar and Pat - he was predeceased by his wife Maggie. He had an unmatched store of yarns and tall tales, built up over his long life which was characterised by hard work and dedication to his community.

In a profile in the Tribune in 2018, Pe said he was driving “until a year ago and still socialises most nights of the week, enjoying card games in the White House (Maunsell's), Durrow, the Blueball, Ballinagar and Kelly's, Mucklagh.”

In the Tribune interview with Gearoid Keegan, he recalled how he moved into this house when he was 11 or 12, and that it was built by Pat Lambe, with the help of Pe himself, carrying one-hundred-weight bags of cement.  During the interview he asked the journalist the question: “Will you have a drop of whiskey?”

He remembered getting his first alcoholic drink in Lawless’s (now Spollen’s), High St, Tullamore when he was about 19. His sister Mary worked there.

“It was St Stephen’s night and I never had a drink but I met this fellow in Tullamore, it was Pat Lambe, he’d be 20-year older than me, wouldn’t he? He was a Pioneer at the time too. He said we’ll go into Lawless’s and get a drink.”

Pat got two brandies and “we drank a good few”, Pe laughs, relating how the man “had a few bob” because he was a builder at a time when money was scarce.

Peter Molloy was already a seasoned worker by the time that St Stephen’s night came along. He left school at 14, having survived a master who “bet the lard out of us” after replacing the gentle woman from Monaghan who had been his teacher before.

“The women might go to the convent or secondary school and the lads went out to work. There was 60 on the roll book in Coolanarney at that time,” he says.

He started work on the family farm of 38 acres, in the pre-myxomatosis era when “the rabbits would eat every ha’p’orth you’d have”.

His father Con died in 1972, having been predeceased by his mother, Katie Kenny, in the 1950s. By then Pe and his brother Carthage, who died only recently, had grown the farm substantially.

In subsequent years he bought three or four further parcels of land before he “divided it up and gave the lads (he has four sons) some”.

They had tillage, sheep, cattle and foul. Beet was a key crop for many years and he bemoans the closure of the sugar factories.

He bought his first tractor, a Ford Major, in GN Walsh's “through the hire purchase” but had “a few pound” saved for the second one.

Investment in a plough and a combine followed as he made the best use of land which he says was always “nice” for tillage. But he adds: “The only thing that beats us is the dry weather, if you have too much drought.

Even with machinery the work was hard. Family, extended family and neighbours would row in regularly.

A believer in self-sufficiency like her husband, Maggie, nee Dunne from Drumcullen, ran the home even though she never drove because her brother Charlie was killed in a car crash in Kilcormac at the age of only 31.

The Molloys brought their own produce for sale in Finlay's of Mountbolus, Craven's of Kilcormac, and further afield in Clara and Tullamore.

The Molloys would kill their own beast once a year and put the meat in the big freezer they bought through Maggie's brother Mikey who worked with the ESB.

Hurling was the pastime he had a passion for, playing with Blackwood, Rahan and Mucklagh, and from full-back he won a county intermediate title in the early 1950s. He followed the great Offaly football teams of the 1960s, 1970s and 1980s and supported the hurlers who made the breakthrough in the '80s and added more All-Irelands in the 1990s.

There were many trips to Croke Park, the journey up and down to Dublin interrupted by stops in watering holes. He was one of the 90,000 sardines jammed into Croke Park for the 1961 final against Down and remembers a man getting his arm caught in a pillar and being stuck there for the entire game.

Deceased was a religious man and other than matches, Sunday always was the day for Mass. That reverence extended to working on a Sunday which was only permitted in exceptional circumstances.

Good humour was the one ingredient which kept him going him going, and it ensured he was on good terms with himself as well as everyone else. “As long as you're not giving any abuse or anything... Anyone that's cranky or bad, shure they can't get on anywhere. No-one wants them,” he told the Tribune in 2018.

His remains were removed from Lawless Funeral Home, Mucklagh to St. Carthage's Church, Killina via Blueball with Funeral Mass celebrated the next morning. Burial afterwards was in Mucklagh Old Cemetery.

My he rest in peace.