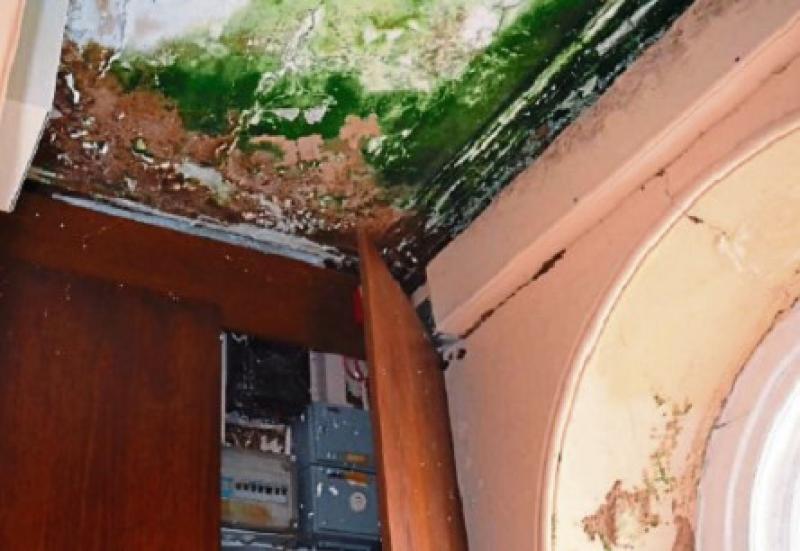 After years of lying idle, Birr Courthouse is in danger of severe damage. Pictured is damp damage in the entranceway ceiling.

Emergency work is to begin on Birr Courthouse this autumn, according to Offaly Heritage Officer Amanda Pedlow.

The courthouse is an historic building dating back to 1810 but it's now in serious danger of becoming a badly damaged, derelict building because of rainwater which is getting into the premises through holes in the roof.

Ms Pedlow told the Tribune that €340,000 has so far been raised for the courthouse and this money will start being used in the very near future.

This fine building on Townsend Street has been empty for eight years. The plan is to convert it into a creative hub for artists in the region to live and work. It will also provide a training space for the local boxing club.

Part of the funding is being provided as part of the Historic Towns initiative, operated by the Department of Housing, Local Government and Heritage.

The Courthouse closed in 2013 as a court and it was agreed to transfer the ownership  from the OPW to Offaly County Council who are working with local community group Birr 20:20 to facilitate the development of an arts hub.

“The funding will go towards securing urgent roof repairs to prevent water ingress,” said Amanda, “and for works to the façade of the building.”

Additional funding will be needed for the next phase to restore and adapt the interior for use as an arts hub.

The funding application focused on the importance of the building in the streetscape, its reuse, the very strong community engagement  and the existing plans headed by Birr 20:20 to use and develop the building for future use as a Creative Hub.
A Conservation Master Plan has been commissioned by the County Council and conservation architects Howley Hayes are in the process of developing this document which will scope out all the work needed for a viable reuse, which will inform all the works to be done on site.

Howley Hayes gave a public zoom meeting last week outlining its Master Plan. Lucy O'Connor of Howley Hayes (which is based in Dublin) said the company is still working on the master plan and haven't completed it yet. She said it will be a full appraisal of this protected structure, examining viable options for the development of the building.

“We are working with the County Council and with local community group Birr 20:20, who will be the tenant of the building which will become a creative focal point for local artists.”

Ms O'Connor said the courthouse was constructed in 1810 and replaced a sessions house. “We are fortunate to have quite a bit of documentation from the 19th Century about the courthouse, including an excellent 1826 drawing of the front of the building by local historian Thomas Lalor Cooke whose drawing shows that the facade is the same today.”

Ms O'Connor went through each of the rooms in the building including the main courtroom (“a fantastic, historic space”), the prisoner cells and the jury room on the first floor.

“We propose restoring the structure as sensitively as possible and as close to its original. There are some partitions which are not original which will be removed.” The structural walls and the wood joinery will of course be retained. “The plan is to create an appropriate and sensitive development,” she said.

The most important work will be securing the structure, she said. “At the moment rain is getting in through holes in the roof, so the roof will have to be fixed as a matter of priority. We will also restore and replicate some of the windows.”

Ms O'Connor said damp and the resulting damage is a problem inside. The pebble dashing on the facade is also problematic, causing damp and will have to be removed, probably to be replaced by a limewash.

Once the renovation work is completed Birr 20:20 will transform the building into what is officially being called a “Creative Court”, a premises which will feature lectures, presentations, act as a meeting place for community groups, include various facilities and amenities (including the local boxing club), and creative spaces for artists. It's planned to install a lift for ease of access between the floors. An extension will be built onto the current building.

Amanda Pedlow told the zoom meeting that builders should be on site tackling the roof within the next few weeks, as well as a quantity surveyor and a mechanical engineer.

Amanda said the building's last court cases were held in 2013, and the building was transferred to Offaly County Council by the OPW in the summer of 2021. She said the Council had commissioned the Howley Hayes Conservation Master Plan for its reuse which will give a massive lift to this neglected building and bring a great boost to the town.

“We were very fortunate,” said Amanda, “to secure money for the emergency works this year which happened at the same time as the OPW handed over the building this summer. We have secured funding of €340,000 which will go towards the emergency works during the autumn. In addition to the €340,000 the additional works will cost €2.5 million.”

She said planning permission will be needed for the works proposed. She added that Birr 20:20 is working on a business plan which will be essential for any funding application along with the Conservation Master Plan.

“We hope to have the business plan and conservation master plan ready in the autumn so when there is a funding call we will be ready.”

She said that while the emergency works will start this autumn the work on the rest of the project will start “as soon as we can secure funding, and we have no idea when that might be as of now.” She said Birr 20:20's proposal to turn the premises into a Creative Court is an excellent proposal.

Amanda outlined the funding for the emergency works: €200,00 from the Historic Towns Initiative (Heritage Council); €50,000 from the Historic Structures Fund; €70,000 from Offaly County Council matching funding; and €20,000 from the Historic Towns Initiative. “This money will go towards the priority roof works to keep the rain out and dry out the building plus a number of window repairs. The Conservation Master Plan (which has been funded by the Heritage Council, Creative Ireland and Offaly County Council) will then be used to apply for funding for approximately €2.5 million to bring the premises to a usable condition.” She reiterated that the OPW gave the building to the County Council. It wasn't bought.

Cllr John Carroll welcomed the positive news. He congratulated everyone involved in this excellent project, which will bring to life a building that is in danger of dereliction. He enquired about green energy. Ms O'Connor said it's planned to use heat pump technology in the building, which will be good for the environment and will considerably lower the heating costs.
One attendee at the meeting asked about off-street car parking beside the building. There was a bit of discussion about this but it's not certain if car parking will be provided.

The meeting was also told that it could be two to three years before all the work is complete and the Creative Court is officially opened.