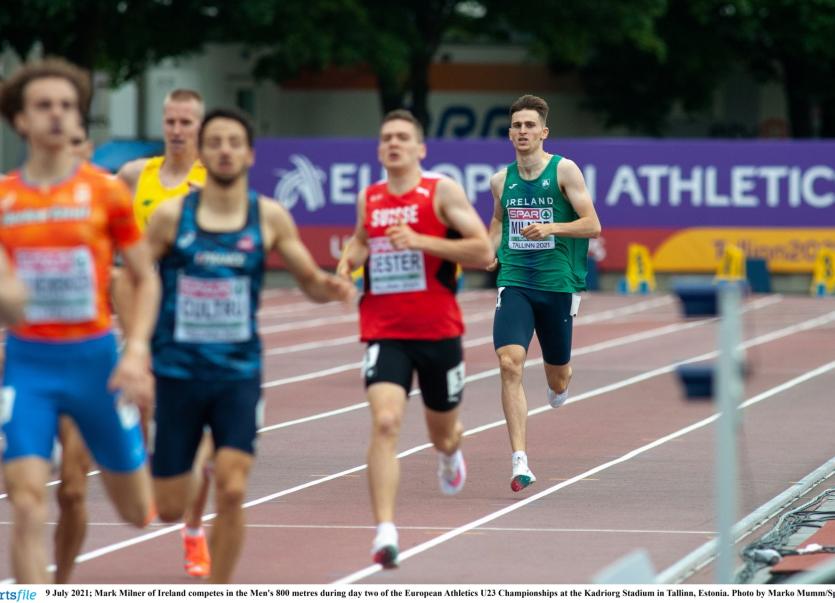 Mark Milner, back, coming home in his 800 metre heat in Tallinn.

THERE was disappointment for Killeigh athlete, Mark Milner when he bowed out in the 800 metres heats at the European U-23 Track and Field Championships in Tallinn last week.

It has since transpired that Milner rolled his ankle after clipping a runner in front of him in the first lap and this resulted in him failing to get inside 1.50 and falling off the pace in the final lap.

A fast improving 800 metre runner, Milner's PB is 1.48.30, a significant one and a half second improvement on 2020. However, he couldn't match that on this occasion as he clipped the foot of the runner in front of him when he tried to improve his position after just 200 metres. As he landed, Milner twisted his ankle and lost crucial metres in the process. He still gave it his all in the second lap and he tried desperately to get into contention. However, when the leaders really put the burners on, Milner was tailed off and he was left to reflect on what might have been.

The heat was won in impressive style by Belgian Chrestan Elliott in 1.47.43. Britain Randolph Thomas was second in 1.48.04 while the third placed Celik Mehmet (Turkey) ran 1.48.70. Milner's ankle was badly swollen after the race but the injury should not hamper him for long and he hopes to resume training in a week.

The most disappointing aspect for Milner will be that he was well outside of his personal best. He had ran 1.48.30 in Italy to qualify for the championships. That wouldn't have been enough to get him one of two fastest losers places for the final but it would have put him in the mix.

Milner, however, will learn a lot from the experience. That is championship running and he has the ability to make considerable improvements in the coming years. Now on an athletics scholarship at UCD, he progressed up through the juvenile system at Tullamore Harriers and is coached by Kilbeggan man Joe Ryan.