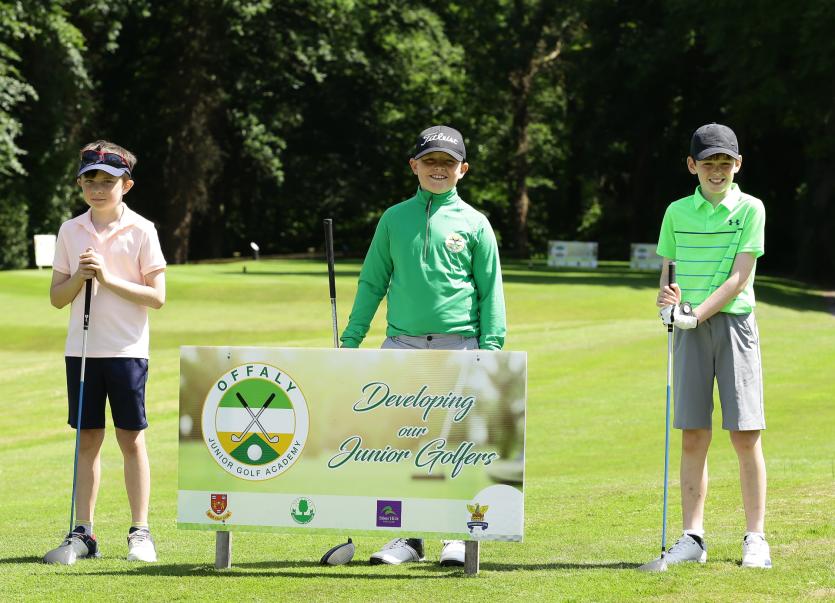 SHANE Lowry's success in the British Openin 2019 may have provided its inspiration but the aim of a fledgling Offaly Junior Golf Academy is very much focussed on participation and enjoyment rather than elite and excellence.

Formed in the wake of Lowry's great triumph in Portrush, the Offaly Junior Golf Academy has provides invaluable coaching for young boys and girls from throughout Offaly. The Academy also hosts tournament days with their opening summer competition held at Tullamore Golf Club last Friday.

87 juniors both boys and girls took part in what proved to be a most enjoyable day for all. The Academy hosts their second tournament at Birr Golf Club on the 19th May and those of you who are Junior members at any of the Academy’s associate clubs, Birr, Tullamore,Edenderry and Tullamore, can register by contacting Cormac on 086 835 3184.

The Offaly Junior Golf Academy caters for 117 juniors from all over the county of Offaly.  Eamon O'Flanagan (the high performance lead at Leinster Golf) and Corey Doherty, Head Pro at Tullamore Golf Club have provided a full spring series of coaching to Academy juniors, with the next phase of the academy concentrating on playing the game of golf and on course strategy and sports psychology. The Academy has also welcomed Dr Mark Campbell from The University of Limerick to the team this year assisting the academy juniors in positive mental behaviour through the game of golf.

Local business have provided generous sponsorship to help the Academy get going while the Offaly Sports Partnership have also come on board with very welcome support – they have been focused on increasing female participation in sport.

The venture has proven to be a great success. The chairman of the Offaly Junior Golf Academy, Brian Monaghan, a member of Tullamore Golf Club, stressed that they weren't focusing on elites as they will be quickly brought into the Leinster and GUI coaching structure. Instead, they wanted to help improve junior golf over the county – the only requirements was that members of the academy had to have the basics, be a member of a club and have their own golf clubs and equipment.

As a result, a variety of golfers have been included from low to higher handicaps, male and female between the ages of 8y and 18. Mr Monaghan stressed that the focus has been on enjoyment as well as giving them skills to enhance their games.

This is year two of a five year programme with the main backers pledging their support for that period. A fundamental aim is to increase the retention rate of juniors into adult golf and Mr Monaghan thanked everyone who has supported the Academy: its members, coaches, sponsors, Offaly Sports Partneship, the participating clubs and parents who have brought their children to coaching sessions.

Mr Monaghan says that the committee goal is to improve the coaching structure of the Academy throughout the five year programme. This year the Academy invested in a unique on line golf coaching app, the first if its kind in Ireland, which allowed the coaches deliver interactive lessons to the juniors throughout the Covid-19 pandemic lock downs.

He also spoke passionately about the benefits to be gained from golf and how it has been one of the first sports to adapt to the Covid-19 environment.

There are 500 junior golfers in Offaly and while all of them couldn't be given the coaching in the Academy, they have supported and encouraged clubs to undertake their own individual endeavours. If golfers make real progress over the few years, they may be invited on to Leinster coaching panels but that is not the driving force behind the Academy, Mr Monaghan stressed. “We want to provide coaching that they might not otherwise get and we want them to really enjoy playing golf,” he remarked.