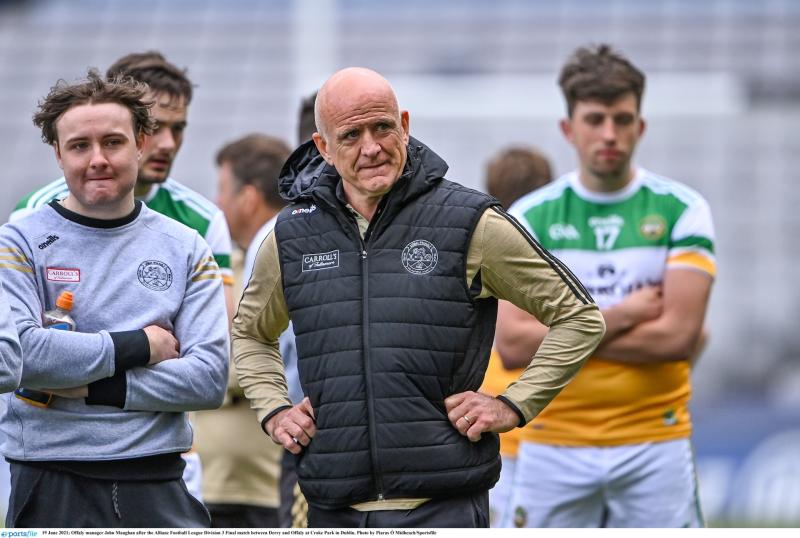 John Maughan after the defeat by Derry.

IT was an obvious question and Offaly manager John Maughan was ready for it after seeing his side resoundingly beaten by Derry in the National Football League Division 3 final last Saturday in Croke Park.

With a Leinster Senior Football Championship first round showdown with Louth looming this Sunday, Offaly had the option of not playing the league final but went ahead with it on condition that it be played in Croke Park – and on the basis that another competitive game would serve the players well.

Considering the way they played in a bad 0-21 to 1-6 defeat, it looked a questionable call but Maughan had no regrets about playing it.

“No, none whatsoever. It’s always a great experience to play in Croke Park and for our boys here, for many of them it was their first time, albeit a rather ugly defeat but nonetheless we always felt it would be good preparation going into the Louth championship game. They are a little bit despondent, heads are down a little bit in the dressing-room but they’ll be fine. That was a bonus game for us, we didn’t anticipate it would go ahead this day last week so they were excited last Sunday morning when I told them the game was going ahead. So I have no regrets whatsoever.”

Where did it go wrong?

“We struggled all over the pitch, to be quite honest with you. Derry are very formidable. They are way advanced in their experience, expertise, the physicality of their midfield, they have a lot of top class performers. Hard to comprehend they were a Division 3 side, to be quite honest. That probably deserves an explanation in itself.

“We were out-classed for periods and we were just hanging in there. Unfortunately we ran out of a little bit of steam going down the last quarter, against a very good side, so we’ve no regrets about playing the game. And Derry were full value for their 12 point victory.”

The Mayo man spoke about the value of playing in Croke Park.

“I’d say there was 2300 from Offaly. It’s good a stadium of this size, you know, it should be well able to accommodate a night like that with where we are in the vaccination roll out. It’s nice. I know there was a big demand for tickets in Offaly in particular. It’s good to see them back.”

He knows that the game gave Louth an opportunity to examine Offaly.

“100 perent. I’ve already watched their game against Antrim albeit the only game they lost in the League. They had a big result against Carlow to get promoted. There’s a bounce in their step down there. Mickey Harte’s arrival, obviously they got a good bounce out of that and we know how difficult they will be. They are a big team as well. They have a lot of big units around the place. I think it was the Sligo game, they banged in three goals in a five minute spell. Yeah, look it, it’s something to look forward to.”

Offaly were in trouble almost from the start on Saturday and it prompted them to introduce Niall McNamee in the 25th minute, much earlier than planned.

“We are very conscious of minding him. He is a jewel of a player. He caused consternation there for periods when we got ball into him. I saw Niall McNamee playing when he was 19/20 with Rhode, watching him play in Leinster club championships and he is a top class operator, very, very good. We didn’t necessarily want to mind him. In fact, we were thinking about starting him to be honest with you.”