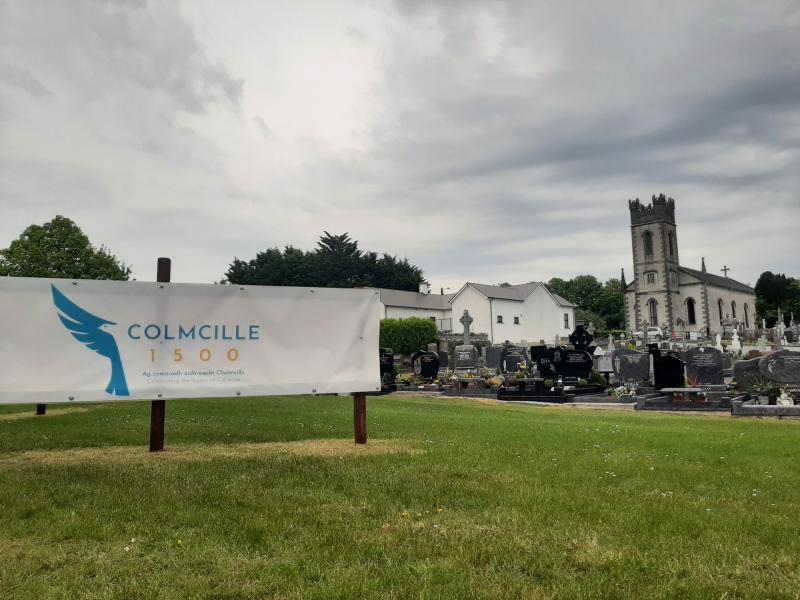 DESPITE Covid-19 restrictions and ongoing issues with access to the monastic site, an extensive programme has been lined up in Durrow to celebrate the 1500th anniversary of the birth of St Colmcille.

The founder of the monastic site in Durrow, where but for Covid the annual Pattern Day would be marked once again by the procession to the holy well, Colmcille is one of Ireland's three patron saints, along with St Patrick and St Brigid.

He is strongly associated with many parts of the country, chiefly Offaly and Donegal, but his international travels mean Colmcille 1500 is also being marked at Iona in Scotland and Lindisfarne, England.

Durrow is playing its part in the international calendar of events with a packed programme today (Wednesday, June 9), the feast day of Colmcille.

Durrow Colmcille 1500 chair, Helen Bracken, who is also chair of the Durrow High Cross Committee (founded to highlight the importance of Durrow's 9th century cross) reflected on the importance of Pattern Day in Durrow and its central place in the life of the local community.

“It was always a very traditional format. Everyone would be doing the preparations beforehand, preparing the graves, preparing their homes for visitors who'd be coming for the Pattern, the First Commouninon Mass at 10am and then the children would have a party in the hall afterwards,” she said.

“Then the Pattern Mass would be at 12 noon, and following that the processision to the well would take place. The last one was in 2019 and a huge number of people attended.”

A band and the First Communion children proceed behind a banner to the well where a blessing of the water takes place and many people take a bottle home.

“The excitement... people would bring home a bottle of water. The brave ones would drink it, none of us ever got sick or we never picked up anything,” Helen laughed.

Formalities on Pattern Day continue with a visit to Durrow High Cross, which is now located inside the old church on the site to prevent further weathering.

The centrepiece of the afternoon was always the Durrow Sports and in the evening a card game would take place in the hall.

“This year there's a virtual Pattern and while it's virtual it's a very full programme. It's very different. As they say, out of adversity comes some advantage and certainly,” said Helen.

Planning meetings have been taking place since April with up to 23 people involved in a hardworking committee which encompasses all the local community groups, including the High Cross Committee, the graveyard committee, the GAA, the hall committee, Community Alert, the school, the choir and the Pattern committee.

“It's a very strong committee. They've absolutely worked non-stop. The school has been playing a big part this year because the school has been facilitating the Facebook, Twitter and Instagram and the children are all involved because for the first time ever they will be at school.”

The events can be followed on the social media platforms, including a celebration of culture and heritage, which was scheduled for Tuesday evening, and a children's art exhibition on Wednesday morning.

The focal points of the day are the Mass in the church at 11.30am (preceded by a candle lighting ceremony) and a tree planting ceremony in the cemetery at 12.30pm.

Three oak trees were planted there in 1997 to mark the 1400th anniversary of the death of Colmcille and from this week the graveyard will have a fourth.

“It will be planted by our two centenarians, Paddy Clavin and Mrs Maggie Sullivan,” Helen revealed.

The planting will be broadcast live on Facebook and later in the afternoon interviews with the Paddy and Maggie, including Durrow's Pride of Place showcase, will be available to view online.

The public will then be joining in the virtual celebrations through the 'Pattern Day Celebrations at Home' online, where people can tag Colmcille 1500 with photographs and captions from their own festivities for the day.

The story of the man who made it all possible, Colmcille (also known as St Columba), will then be explored in a Zoom lecture by the historian Dr Brian Lacey at 7.30pm.

Dr Lacey will argue that despite claims that Colmcille was the founder of many other monasteries in Ireland, Durrow is the only one for which there is genuine historical evidence.

“There's proof in the annals. We have always known that,” remarked Helen Bracken.

At the same time, she is delighted that this year Durrow is part of a network of Colmcille anniversary celebrations, spanning several counties especially closely linked with the saint, from Moone in Kildare and Kells in Meath to Drumcliffe, Co Sligo, plus Donegal and Derry.

Donegal County Council, Derry City and Strabane District Council have teamed up for a joint programme of events throughout the year.

Colmcille was born in Gartan, Co Donegal, on December 7 in either 520 or 521, but historians have agreed to mark his 1500th this year. He is the patron saint of Derry but his link with Offaly has been immortalised in the preserved 7th century manuscript, the Book of Durrow.

The relationship Ireland has with Scotland because of Colmcille is being celebrated in a project run by Foras na Gaeilge here and Bòrd na Gàidhlig in Scotland (log onto www.colmcille.net) and the official logo of that is used on the signs erected around Durrow in the last couple of weeks.

Helen Bracken's aim is to cement Durrow's central place in the legacy of Colmcille and she said the supervised visits to the High Cross in the renovated church since 2012 each August had been a huge success.

“From that summer on, every summer, up to Covid, in the first fortnight of August the Durrow community would meet visitors from mall parts of the world. Quite a few would have visited Iona, gone on to Derry and to us,” she said.

“We even had a couple of Japanese groups with their interpreter come in recent years and they are very interested in the heritage.”

In addition to the church building, the graveyard (which has Church of Ireland and Catholic burials), and the well, there is a Norman motte behind Durrow Abbey House.

“There's an absolutely marvellous history there. There is very little on the surface but the geophysical surveys have confirmed the outline of the monastery and the outline runs under the house.”

After the lecture by Dr Lacey the final online event will be 'Reeling Through the Years', a visual study of local history.

Welcome Back! Business brisk in Offaly as outdoor dining and drinking returns