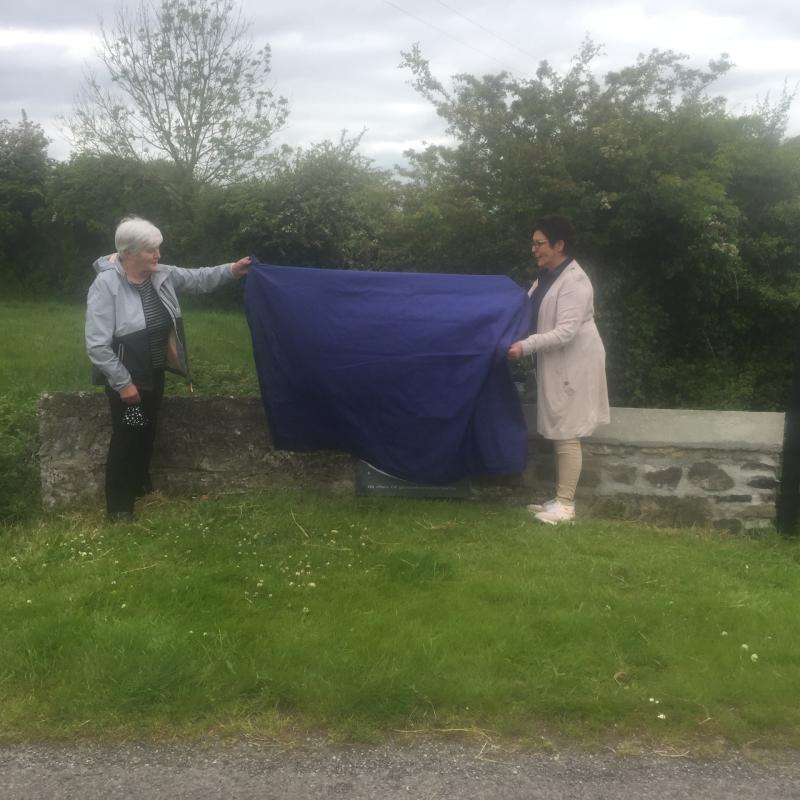 A LIMESTONE plaque marking the site of an ancient church dedicated to St Senan and an adjoining burial ground has been unveiled at Bogtown outside Cloneygowan.

The memorial was made possible by the foresight of local people who were determined that the historic site, of which no remains are now visible, was appropriately commemorated.

The church was associated with St Senan, a contemporary of St Patrick over 1500 years ago, and the burial ground is the final resting place of people from the area who perished in the Great Famine in the 1840s.

The site is known as Templeshenane and the memorial stone has been erected on a bridge over the river Ennie, close to Kilcooney bog.

The idea of erecting a memorial stone was the brainchild of neighbours, Breda Coleman O'Connor and Bernie Kirwan.

The formidable duo enlisted the help of Bernie's son, Michael, who with the help of others and with advice from Offaly County Council, erected the stone.

Locals are very grateful to stonemason, Nettie Emerson from nearby Portarlington who provided the carved limestone memorial at no cost.

Locals also sought the advice of historian P.J. Goode, the author of a history of Cloneygowan and the surrounding areas which was published in the 1980s.

The effort was also supported by local parish priest, Fr John Stapleton who attended the official unveiling of the memorial., held in compliance with Covid guidelines, on Saturday afternoon last.

The work was carried out last summer during the first Covid lockdown by Michael Kirwan after he received advice from Offaly County Council's area engineer, Mark Mahon and council employee, Brendan Kelly.

The stone has been mounted on the river Ennie bridge and identifies the historic Christian site to passers-by, many of whom would otherwise be unaware of its existence.

Speaking to the Tribune on Saturday last, Breda Coleman O'Connor stressed the importance of sites of historical importance being properly marked.

Quoting the botanist and historian, Dr John Feehan, Breda said it was particularly important to commemorate these sites in “a time the landscape of Offaly is changing at an unprecedented rate, a time when it is important as never before to preserve the legacy of the past.”

Though there were no visible remains of the church now, Brenda recalled humps in the landscape when she and her bother picked mushrooms there as children.

Historian PJ Goode said it was not possible to identify the St Senan associated with the site as there are 22 Senans in the calendar of Irish saints.

“The name Senan, meaning wise one, is attributed to many Irish saints, the most well-known being Senan of Inis Cathaigh or Scattery Island in the Shannon estuary in county Clare,” outlined PJ.

He said there were no headstones visible at the site but burials did take place there.

In his history of Cloneygowan., PJ writes that John O'Donovan in his Ordnance Survey letters simply referred to it as the remains of an old church and burial ground but it was not in use for burials when the Valuation Lists were made in 1854.

He said that local folklore suggested that it was also a Famine burial ground.

Local people are very grateful to Nettie Emerson for providing the carved stone and to the help they received from Offaly County council.

Breda Coleman O'Connor stressed vital role the council has to play in assisting local communities who wish to mark sites of historic interest in their areas.

“Small little groups like us should be encouraged and not put off by bureaucracy and red tape,” pointed out Breda.

The stone was unveiled on Saturday in an informal ceremony by Breda and Bernie Kirwan, a native of Ballyfrin who has lived in Bogtown for the past 55 years.

Speaking afterwards, Fr John Stapleton said it was very important to commemorate our ancestors, a people who had kept the faith alive during often very difficult times.

Referring to a holocaust memorial in Jerusalem, Fr Stapleton said “forgetfulness leads to exile, remembrance is the secret to success.