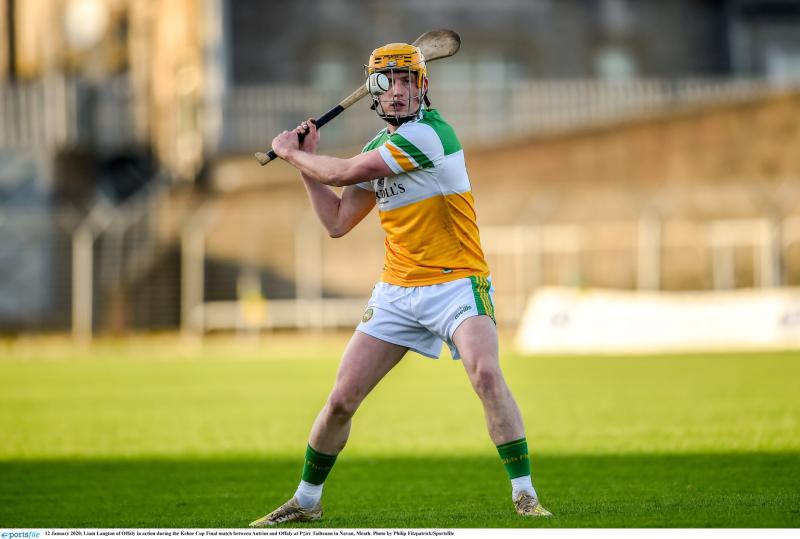 Liam Langton is in great form for Offaly.

PROMOTION from Division 2A of the National Hurling League is now firmly within the potential of Offaly, who have made an excellent start to the campaign.

Fresh on the back of very impressive wins over Meath and Kerry, Offaly head to Carlow next Sunday and a win here will put them on the threshold of promotion.

With the top team in the division going up to Division 1B, Offaly now have their fate very much in their own hands. While it is not a surprise that they should challenge for promotion, Offaly's form in their opening two games has come as a welcome boost.

Last year Offaly lost to Kerry and just barely beat Meath as they finished a disappointing third in Division 2A. They have been much better this year and there is clear evidence that Kilkenny man Michael Fennelly now has them moving in the right direction.

This year, however, they have made obvious early improvement. A facile first round win over Meath was followed by a 2-28 to 0-13 demolition of Kerry last Sunday. While Kerry were understrength, it was a really encouraging display by Offaly and it augurs well for their prospects this season.

It will also result in Michael Fennelly adjusting his season's goals. While promotion in the league was always a desirable objective, Fennelly had played down their chances before it commenced. He had pointed out that Offaly would be playing four teams in a higher championship grade, the Joe McDonagh Cup – Meath and Kerry have already been accounted for and now they have Carlow and Down, to be followed by a last game against a fellow Christy Ring Cup team, Wicklow.

Fennelly may have been trying to lower expectations and remove the pressure by referring to the volume of teams in the Joe McDonagh. He also learnt a lot from last year and found out exactly how Offaly had managed to descend to hurling's third tier.

Now, however, there will be no escaping an increased level of expectation in the wake of Offaly's very encouraging start. It suggests that promotion in both league and championship is very achievable and Offaly are good enough to make the double leap.

There are plenty of pitfalls ahead. Offaly really should be good enough to win the Christy Ring Cup and Carlow now provide the biggest obstacle between them and league promotion.

Offaly are now top of the division with four points from their two games. Carlow, Meath, Down and Kerry all have two and as expected, Wicklow are pointless.

Already, there has been a surprise with Carlow losing to Down last weekend. Relegated from Division 1B last year, Carlow were the early favourites for promotion but that mantle has now transferred to Offaly. Down beat Carlow by 3-20 to 3-18 in a high scoring game at the weekend and they will be aiming to quickly bounce back.

While Offaly lost to Down in the Christy Ring Cup last year, it was on penalties and they know they are capable of beating the Ulster men. They will be hot favourites to beat Wicklow in their last game and a win on Sunday could effectively secure promotion for Offaly.

It is a huge game but Offaly will be wary travelling to Carlow. They have been bitten by Carlow on a few occasions in recent years and this looks to be a 50/50 game. The same, however, was said about the Kerry game on Sunday and Offaly had twenty one points to spare.

This game will tell us more about Offaly. Many of the younger players are going well. Liam Langton is flying in the attack and Ciaran Burke, Killian Sampson, Ross Ravenhill and Brian Duignan are playing very good hurling. Eoghan Cahill continues to impress as a real scoring machine, capable of some audacious skill and more experienced players such as Ben Conneely, Shane Kinsella and Oisin Kelly are contributing well.

Corner backs Paddy Delaney and Joey Keenaghan did not feature here having sustained heavy knocks to an ankle in the win over Meath. Another few days may bring them back into the equation but Fennelly and selectors will be reluctant to interfere with a winning combination. They are keen to give younger players experience and used their full quota of subs last week.

They will continue to give players games but they won't be experimenting too much for this one. The trip to Carlow is one of their biggest games of the year. Win here and promotion will be almost in their grasp. It is a hugely important game for Offaly and there is pressure there. That is welcome as players must be able to perform under pressure. Offaly have suffered at Carlow's hands before and could do so again but they are clearly improving. They are working hard, playing with flair and moving in the right direction. They can take another important step on the road to rehabilitation.