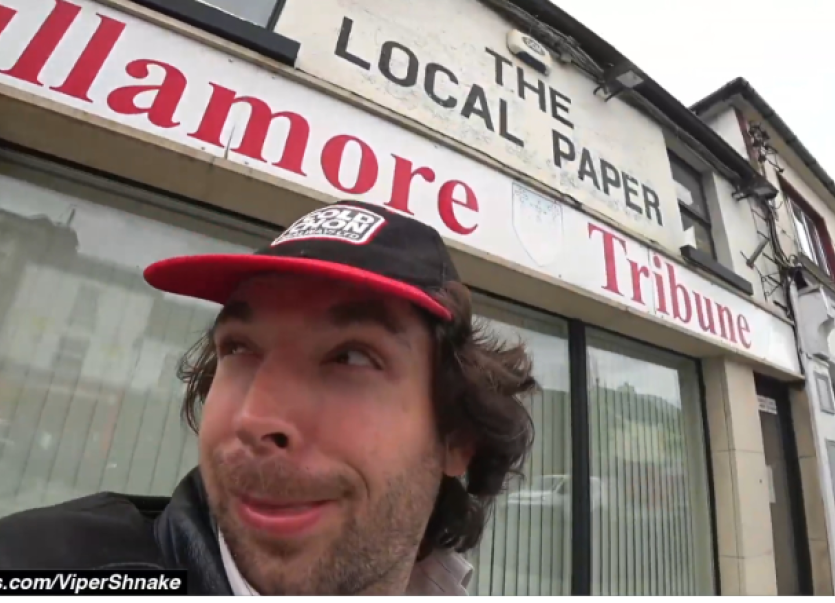 TULLAMORE had a visit yesterday from the talented Tommy Shlug who did a live stream from the town as he walked around looking at the shops and talking to locals.

Tommy Shlug is the alter ego of Chris Tordoff who has a range of personas and can appear as a number of different characters on YouTube, including The Viper and Francis Higgins. WATCH HIM IN TULLAMORE BELOW:

He also performs sketches for the Russia Today channel. In addition he was the original director of The Hardy Bucks series currently showing on Netflix.

But it was Tommy Shlug that arrived in Tullamore yesterday. Thousands watched him from around the country and elsewhere as he stopped off at the Little Coffee Hut and chatted to the lady behind the counter, giving a shout out to Derek Mangan of Sootboosters who was also picking up a coffee.

He then came into town and walked around before going for hot chocolate to Chocolate Browns and generally admiring the town.

A lot of people seemed to recognise him as there was some horn tooting going on. He asked viewers where he should go and people were telling him to go to the Tullamore DEW Distillery, or the Town Park, others wanted him to go down O'Molloy Street, but Charleville Castle won out.

However, after walking down to the gates following a detour through the bluebells the gates were locked and all he could do was look in and admire the castle.

Tommy said he will come back and let's hope he does, as he is good fun to watch. The video was originally posted on StreamLabs.