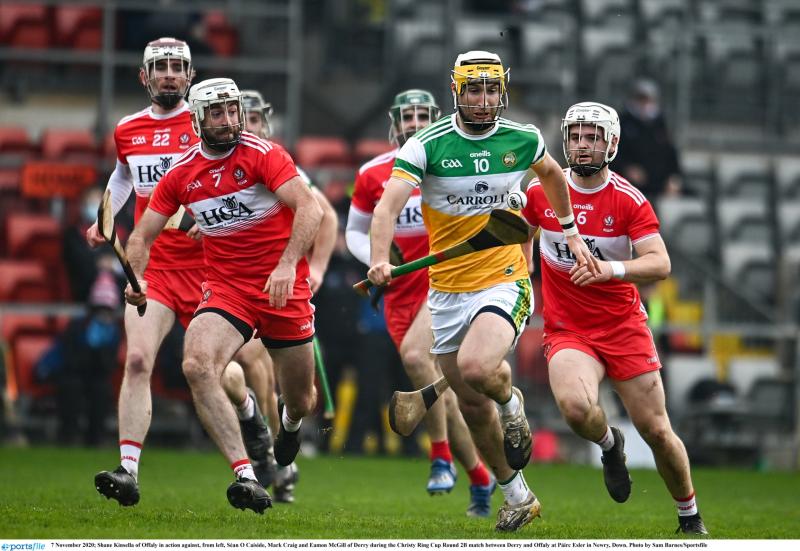 THE target is simply concise and precise for the Offaly senior hurlers in 2021: Win the Christy Ring Cup and their season will be a success, anything else and it will be a resounding failure.

Now very much entrenched in hurling's third tier, Offaly are desperate to get back up to the Joe McDonagh Cup.

They were beaten by Down last year in the Christy Ring Cup semi-final and that showed exactly why they were back in huring's third tier. They were unlucky in normal time with a penalty goal not given after it rebounded out from the back woodwork but Offaly still gave a substandard display and suffered a devastating defeat on penalties after extra time failed to separate them.

There have been significant changes in the panel from last year. Cillian Kiely has opted out for personal reasons and this is a big blow as he had been one of Offaly's better players last year. Shinrone twins Sean and Michael Cleary have retired and their club mate Dan Doughan, Andy Flynn (Lusmagh), Brendan Murphy (Birr), Seir Kieran's Kevin Dunne, Kinnitty's James Dempsey and Shamrocks' David O'Toole-Greene are among the others who are gone – a variety of reasons are at play.

It has given manager Michael Fennelly and selectors the chance to blood new players. St Rynagh's Luke O'Connor, Padraig Cantwell of Shamrocks and goalkeeper Eamon Cleary (Shinrone) have been called up from last year's U-20 squad.

It will take time for many of these to adjust to the life of inter-county hurling and the increased intensity.

The league may prove to be an unforgiving place for some of them. Offaly are in Division 2A of the National Hurling League. They face four Joe McDonagh Cup teams in their first four games. They begin on Sunday, May 9 with a trip to Navan to face Meath. A week later, Sunday, May 16, they are at home to Kerry in O'Connor Park. They travel to Carlow on Sunday, May 23 and then have a week's break before a home game against Down, this time in Birr on Sunday, June 6 with their only game against Christy Ring Cup opponents Wicklow game seven days later.

It will be interesting to see how Offaly perform in these. It won't define their season and it won't tell us anything definitively but it will provide evidence of how Offaly are going. Some of those newcomers will get their chance and while they deserve breathing space and time, it will give an indication of their potential.

The league is bonus territory for Offaly. They have lost to Carlow, Kerry and Down in the past couple of years while they were very close to losing to Meath last year. Those results showed why Offaly are in the Christy Ring Cup and expectations that they should beat them are based on past memories rather than modern reality.

Yet if Offaly were to win a few games and challenge for promotion, it would work wonders for the confidence of all involved. At this stage in their development, Offaly may not be able to get enough points for promotion but they should be able to compete very well.

There is clearly a huge desire among all involved. Michael Fennelly has a genuine interest in the development of Offaly hurling. There is no doubting his pure motives and he is clearly focused on raising the bar and improving each player individually. The manager deserves time and patience – he does need to win the Christy Ring Cup for this to be granted but he knows how far Offaly are back down the ladder and he knows what is needed to improve. Time will tell if the potential for that improvement is there but Offaly have a very hungry group of players at the moment and the commitment looks to be there.

Fennelly and company need to treat the league as a ground for experiment. They have to field strong teams and Offaly can't afford bad beatings but this needs to be balanced with throwing younger players in. Games will bring them on and management will learn most about them in competitive action. A couple of wins will serve the purpose of the league for Offaly and if they did get into the promotion mix, it would be a bonus.

It means that there is nothing at stake in the group stages and the real action will begin in the quarter-finals. Offaly beat Derry in the quarter-final last year and their biggest opposition is likely to come from the northerners. While nothing would surprise with Offaly hurlers after their rapid descent in recent years, they really should be good enough to beat Sligo, Wicklow and Roscommon. They were good enough to beat Derry last year and Offaly are the favourites to win the Christy Ring Cup.

Shane Dooley is Offaly's most experienced player while Shane Kinsella and Damien Egan also have loads of experience. Brian Watkins is in his 30s but there is a need for some of the younger brigade to step forward and take on the mantle of leaders. Shane Dooley can't be expected to win games for Offaly at this stage of his career, though he has an important role to play and it is great to see him on board for another year.

Offaly will be looking to players such as Ben Conneely, Oisin Kelly and David Nally to provide inspiration, leadership and consistency. Nally may be young but is one of Offaly's most important players while younger players such as Durrow duo Brian Duignan and Ross Ravenhill will be trying to develop further this year.

Offaly really should be able to win the Christy Ring Cup and that will provide a solid stepping stone for the future. It will cement Fennelly's immediate future and it will set the players up for a tilt at the Joe McDonagh Cup the following season.

Most Offaly pubs expected to reopen after 'tough and unprecedented year'